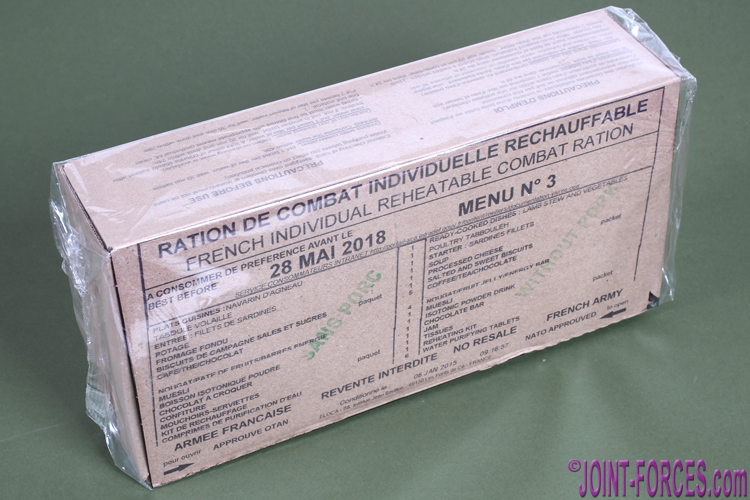 Belgium does not produce its own 24-hour ration packs but instead issues the French Ration de Combat Individuelle Rechauffable or RICR to its troops on deployments and exercises, writes Bob Morrison.

Whenever we get the chance, while Carl Sculze or myself are working in the field with the armed forces we keep an eye out for ration packs we have not previously covered. During Exercise STORM TIDE III, held in Belgium in 2016, Carl was able to secure for us one of the ration packs issued to Belgian Commandos but, rather than being home-produced, as anticipated, it turned out to be a French RCIR.

Having recently looked back at the French Individual Reheatable Combat Ration (Ration de Combat Individuelle Rechauffable or RICR) on JOINT-FORCES, and with a recently sourced and still current Ration Individuelle D’Exercice Rechauffable (RIE) waiting in the wings, it seemed logical to now examine the Belgian-issued RCIR. The accompanying images and the following text are a minor rework of an article first penned in late 2016 for the now out-of-print, and seemingly no longer viable to publish in hard copy, COMBAT & SURVIVAL Magazine.

The 2018 expiry date Menu No. 3 RICR pack featured here, which Carl picked up in June 2016 in Belgium, is externally almost identical to the French 2003/4 expiry date Menu No. 7 and Menu No.11 packs, but it does not have FRENCH ARMY and NATO APPROUVED [sic] markings, and the French language equivalent, on the longer sides though it does have PRECAUTIONS BEFORE USE instructions printed in both French and English on one side. On the base of the carton are address details for ELOCA, the French MoD organisation responsible for rations, rather than the 14-Menu list found on the 2004 dated samples. The top of the current carton is near identical to the earlier featured ones, with contents list in both French and English, and it has FRENCH ARMY and NO RESALE in both languages below the lists.

The contents of the current Menu No.3 are not too different from the packs we first looked at back in 2009, and reprised here, with the only real changes being that some of the packaging appears to be more commercial; use of familiar commercial brands rather than plain military packaging is quite commonplace for most NATO armies these days. As before, the current RCIR relies heavily on cans rather than retort pouches or freeze-dried sachets, and a Reheating Kit with fold-up cooker, Esbit hexamine fuel tablets and safety matches is included.

The two main meal cans in our pack were NAVARIN D’AGNEAU (Lamb Casserole) and TABOULE VOLAILLE (Chicken Tabbouleh) and the other tins contained FILETS DE SARDINES (Sardine Fillets in Olive Oil) as a starter plus FROMAGE FONDU (Processed Cheese) for spreading on biscuits. There were sixteen biscuits supplied, four pairs salted and four pairs sweet, just like the last RCIR we reviewed, but this time rather than being cellophane wrapped each pair was foil wrapped and they were packed in a commercial brand outer carton. The two main items in pouches, rather than cans, were freeze-dried chocolate muesli and powdered soup (curry flavour) which each required hot water to reconstitute.

The brew kit, consisting of 2x coffee, 2x tea, 1x hot chocolate and 2x sugar was shrink-wrapped in plastic with 2x salt & pepper sachets also included. There was also a separate orange energy drink powder sachet. For snacking, the pack contained 2x energy bars, a fruit nougat bar, a jellied fruit bar, and a chocolate bar – all commercial brands – plus there was a sachet of fruit jam for spreading on the biscuits or just sucking for an energy boost.

The French KIT DE RECHAUFFAGE (Reheating Kit) contained in a white card carton consisted of a galvanised pressed metal fold-up field cooker, a fold-up can handle made of similar material, two packs of three hexamine fuel tablets, a pack of six water sterilising tablets, a box of safety matches, a black bin bag for waste, and the smallest folding spork I have ever come across. This last tiny item has gone in my survival tin as one day I might just need it and it takes up next to no space. The only other component in this 24 hour ration pack, which tipped the scales just under 1.8kg, was a pack of tissues.

There are some military ration packs which I have taste tested with a degree of trepidation and one, the poor condition Angolan pack which Andy from East-West Trading magicked up, which I have reviewed but declined to eat. I was confident, however, that this RCIR would be good quality and tasty as the French pride themselves on their cuisine. I was not disappointed. The lamb casserole, which I heated on the field cooker, was very tasty indeed but the tabbouleh, which is intended to be eaten cold, was absolutely superb. Folded Cooker with Fuel Tablet, Meal Can with folded Handle and unfolded mini-spork atop [© BM]