Death of HRH The Prince Philip Duke of Edinburgh 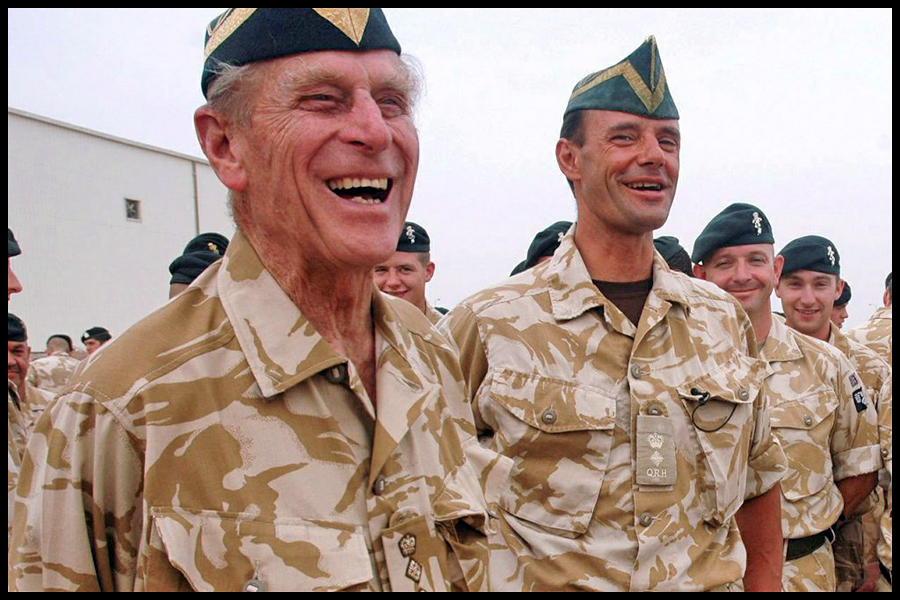 HRH Prince Philip, Duke of Edinburgh shares a joke with the Commanding Officer and soldiers of the Queen's Royal Hussars Battle Group at Basrah Air Station in Iraq in 2006 ~ at the time the Duke was the QRH Colonel in Chief [Crown Copyright]

Prime Minister Boris Johnson has issued a statement on the death of His Royal Highness The Prince Philip, Duke of Edinburgh.

Statement, 10 Downing Street, 09 April 2021: It was with great sadness that a short time ago I received word from Buckingham Palace that His Royal Highness The Duke of Edinburgh has passed away at the age of 99.

Prince Philip earned the affection of generations here in the United Kingdom, across the Commonwealth and around the world. He was the longest serving consort in history, one of the last surviving people in this country to have served in the Second World War at Cape Matapan, where he was Mentioned in Despatches for bravery and in the invasion of Sicily, where he saved his ship by his quick thinking and from that conflict he took an ethic of service that he applied throughout the unprecedented changes of the post war era.

Like the expert carriage driver that he was he helped to steer the royal family and the monarchy so that it remains an institution indisputably vital to the balance and happiness of our national life. He was an environmentalist, and a champion of the natural world long before it was fashionable. With his Duke of Edinburgh Awards scheme he shaped and inspired the lives of countless young people and at literally tens of thousands of events he fostered their hopes and encouraged their ambitions.

We remember the Duke for all of this and above all for his steadfast support for Her Majesty The Queen. Not just as her consort, by her side every day of her reign, but as her husband, her “strength and stay”, of more than 70 years.

And it is to Her Majesty, and her family, that our nation’s thoughts must turn today. Because they have lost not just a much-loved and highly respected public figure, but a devoted husband and a proud and loving father, grandfather and, in recent years, great-grandfather. Speaking on their golden wedding anniversary, Her Majesty said that our country owed her husband “a greater debt than he would ever claim or we shall ever know” and I am sure that estimate is correct.

So we mourn today with Her Majesty The Queen. We offer our condolences to her and to all her family and we give thanks, as a nation and a Kingdom, for the extraordinary life and work of Prince Philip, Duke of Edinburgh.

Upon the sad news of the death of HRH The Duke of Edinburgh, Defence Secretary Ben Wallace said: “I join the Prime Minister in paying tribute to His Royal Highness The Duke of Edinburgh at the time of his death. A constant supporter and ambassador of the Armed Forces throughout his lifetime, he will be very much missed by members of the military community.

“As a Royal Navy officer, The Duke of Edinburgh upheld all values that the Armed Forces represent. His leadership, dedication and passion for serving his country is something that all those in uniform can relate to.  It is only fitting that the Armed Forces will play such a high-profile role in the events to commemorate His Royal Highness’ life and lay him to rest. The Duke of Edinburgh had a long affiliation with the Royal Navy, having trained at Britannia Royal Naval College in Dartmouth before deploying onboard HMS Ramillies, HMS Kent and HMS Shropshire to serve his country during the Second World War.

“Throughout his life The Duke of Edinburgh kept a close association with members of the Armed Forces of all ranks. Upon completing his Naval service in 1953, His Royal Highness continued to uphold the high standards and values of the Armed Forces through various military titles including Honorary Admiral of the Fleet, Captain General of the Royal Marines, Colonel-in-Chief of the Army Cadet Force and Air Commodore-in-Chief of the Air Training Corps.

“As a former Officer in HM Armed Forces, I have seen for myself the impact of His Royal Highness’ role and work with our servicemen and women. His commitment and support to those on the frontline, and his interest in innovation for future generations of the Armed Forces was admirable.”

“All sailors, soldiers, marines and aircrew are inspired by the example set by their predecessors. The Duke of Edinburgh and his generation will forever be treasured by the Armed Forces for their leadership and sacrifice during the Second World War.

“As we mourn The Duke of Edinburgh and offer our condolences to Her Majesty The Queen, we will remember all that His Royal Highness contributed towards the Armed Forces and be forever grateful for his service.”