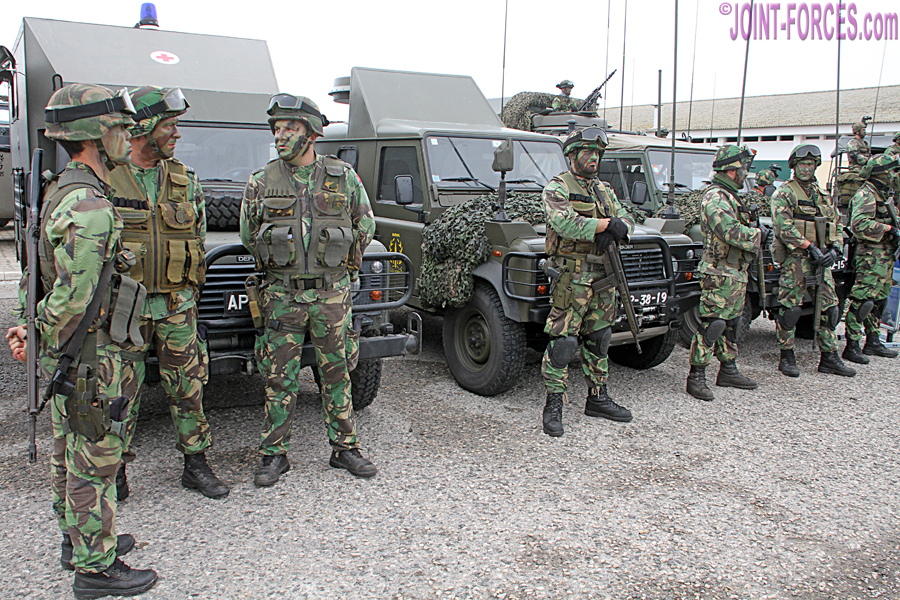 Elite Portuguese Fuzileiros stand at ease in front of their Defenders awaiting the arrival of the NATO Secretary General and other Distinguished Visitors, November 2015 [© Bob Morrison]

The Portuguese Armed Forces, including the Fuzileiros, have a long tradition of using Land Rovers going all the way back to the Series One, writes Bob Morrison.

While I was sourcing images for the recent Kit & Camo section feature, Portuguese DPM ~ Corpo de Fuzileiros, I rediscovered a folder of images of some of the Corps’ unique Defender variants taken on a 2015 whirlwind trip to the Tróia Peninsula, about 50 kilometres south of Lisbon. I was there to cover a dynamic demonstration by the British-led multinational amphibious brigade participating on Exercise TRIDENT JUNCTURE ’15, which had roamed across the Mediterranean from Sicily to Portugal via Spain ~ where I had been snapping two multinational Land Forces brigades over previous days on Spanish training areas from Chinchilla in Albacete to Zaragoza in Aragon ~ but it was Portuguese Fuzileiros who provided the main static display on my final day in the field.

The Corps of Fusiliers, to use the English translation, are the Portuguese Armed Forces’ equivalent of Britain’s Royal Marines and are an arm of their country’s Navy. Like their British amphibious cousins, the Fuzileiros are regarded as an elite military formation and every recruit has to pass an onerous ten-month initial training programme before being accepted into the Corps. Formed into two Marine Battalions, each of which can be structured to give an amphibious battlegroup, the Corpo de Fuzileiros are regarded as being Special Operations Forces with the cream forming a separate Special Actions Department (Destacamento de Ações Especiais) of Naval Special Forces along the lines of Britain’s SBS or the United States’ SEAL Team Six.

During the brief 5th November 2015 visit to the Pinheiro da Cruz naval facility on the Sado River side of the Tróia Peninsula by NATO Distinguished Visitors, including Secretary General Jens Stoltenberg plus invited Generals and Defence Attachés, the full breadth of Fuzileiros’ military capabilities and equipment was displayed. As I had not worked with the Portuguese Armed Forces on home territory since the early 1990s, back in the days when the multinational ACE Mobile Force was tasked with the defence of NATO’s northern and southern flanks in Europe, and as I had not previously had the opportunity to photograph Land Rovers used by the Fuzileiros, the one-day trip to the Tróia Peninsula was an opportunity I felt too good to pass over; and when the US Air National Guard offered to fly me to Lisbon by C-130 immediately after the Zaragoza DV Day on the 4th I gratefully accepted the flight. I was also keen to photograph Britain’s Royal Marines working alongside their Portuguese and US cousins on a multinational amphibious landing so the trip would have been worthwhile even if there were no Portuguese Defenders on show, but not only did the Fuzileiros have a few of their Land Rovers on display but there were also a couple of very rare variants in the line-up.

There were actually four Defender versions presented for the Distinguished Visitors party to look over, but one was almost totally covered by camouflage netting so I could not photograph its exterior. As on security grounds the small media party accompanying the DVs were only allowed to visit the site by chartered coach from Lisbon and under police escort, it was not possible for me to hang around afterwards to photograph this intriguing vehicle during the display breakdown but I was able to ascertain that it was a specialist hard top Defender 90 with full external roll cage and roof stowage rack for the camouflage nets; I was also allowed to quickly snap the comms operator in the rear after the NATO SecGen had been briefed on comms.

The other trio of vehicles could, however, be photographed externally though I was warned that under no circumstances would it be possible for me to photograph the interior of either the soft top D90 or the hard top D110 as the equipment in the rear compartments was highly classified. The Fuzileiro medics did, however, briefly open up the back of the D110 ambulance so I could quickly photograph the interior.

This ambulance conversion, unlike the other Land Rovers used by this specialist Fuzileiros sub-unit, was not highly classified so it is possible to discover its technical specification requirements which, I am reasonably confident, it will share with its close siblings. Converted by Futurvida, a company based in northern Portugal which has specialised in medical and emergency vehicle conversions for around 20 years, the vehicle was based on a 2006 Model Year LHD two-door D110 (see caption) truck cab chassis with Td5 engine and 5-speed gearbox.

The purchaser’s operational requirements for the ambulance conversions, a copy of which I was able to find during my original research, specified: good performance on-road and off-road; high corrosion resistance with the ability to operate in a marine environment; ability to land on open coast and progress to the interior by own means; ability to cross watercourses up to 1500mm in depth, with prior preparation; ability to start the engine when submerged; ease of maintenance; reduced silhouette; and capability to be heli-transportable. The technical specification required, among others: raised air intakes; aluminium or corrosion-treated body; anti-corrosion treatment to chassis; removable side doors; and lifting eyes on the chassis for helicopter transportation. It is also notable that the ambulance has a bumper-mounted self-recovery winch and a Partial Blackout System, including Blackout Driving Lamp, Front Blackout Marker Lamp and Blackout Tail/Stop Lamp.

Sitting alongside the Defender 110 ambulance in the Pinheiro display was a highly unusual D110 hard top with a large circular radar housing on the roof over the rear compartment and a triangular sheet metal cowl in front of it over the cab. The Fuzileiros accompanying this vehicle were unable to discuss its role or capabilities but, as I had previously worked with NATO’s JEWCS (Joint Electronic Warfare Core Staff) who used similar equipment on a small Land Rover Defender fleet, I recognised this as being an EW platform. Like the ambulance, the base vehicle was a 2006 model with 2493cc Td5 engine and 5-speed box but it had a near standard hard top rear body; though two small sliding windows were let into the right side panel to provide light and ventilation to the systems operator in the rear compartment.

The third Land Rover in the line-up was a soft top Defender 90 and a check of its chassis number revealed it to be one of the earlier 1996 Model Year batch which came off the Solihull production line with the 4-cylinder 2495cc 300Tdi engine. As can be seen from the copious antennae – it had five when two or three is the norm for most other FFR, or Fitted For Radio, Defenders – this vehicle had a specialist communications role. This D90 had side glazing panels but similar Fuzileiros Land Rovers with plain sided canopies seem to be more numerous. The tailgate was side-swinging, as opposed to bottom hinged like its UK Forces siblings.

Other points of note on both the D90 soft top and the D110 hard top featured here were the unusual shapes of the mounting boxes for the antennae and the blackout lighting arrangements. I have not seen mounts like these on any other military Land Rovers so suspect they may have been added in Portugal by a specialist conversions company. The blackout/convoy lighting, however, was quite similar to that used by some other NATO countries and I have even seen it factory fitted at Solihull.

Various other Land Rover model body styles were, and are, used by different branches of service, but other than those mentioned in this article the only one I can confirm being used by the Fuzileiros is the D110 station wagon; regrettably I was unable to photograph one of these on my 2015 trip, but maybe next time.

While on winter weekend holiday break in the Lisbon area in 1993 I was permitted to photograph a Defender 110 station wagon and some three-door windowed hard tops which had just arrived as part of the latest Portuguese military Land Rover procurement. Access was arranged by the Solihull’s Government & Military Operations team, who were keen to get word out that a Defender model powered by the still quite new 200Tdi engine, developed originally for the Discovery, was entering military service with a Western European country. At the time I guessed these might be destined for the Paras, but I now suspect they may have been for the Fuzileiros.

Although Portugal’s armed forces have used Land Rovers for over six decades, they have never put all their eggs in one basket and it has not been unusual to see British vehicles serving alongside American, German, Japanese or even Portuguese (UMM) manufactured light and medium utility vehicles. At the DV Day for TRIDENT JUNCTURE 15 the Fuzileiros also fielded several militarised Toyota Land Cruisers and I have (no doubt to the horror of some dyed-in-the-wool green oval badge aficionados) included a couple of shots of these as well as they are rarely seen.