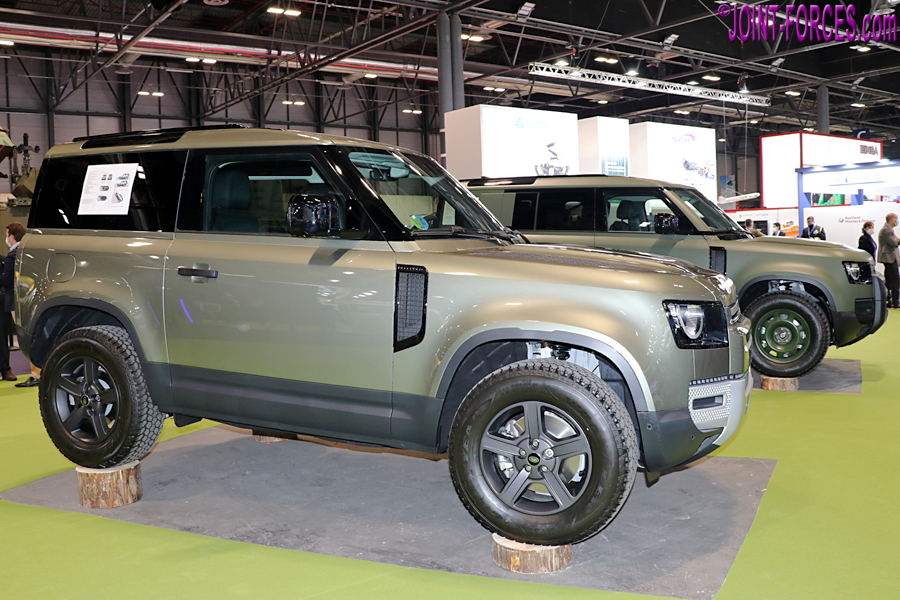 FEIDEF, the biennial Spanish defence exposition, opened this morning with Jaguar Land Rover providing almost twenty vehicles to convey official delegations and three of the fleet were New Defenders; the others being Discovery, Range Rover and F-Pace models.

It has been several years since (Jaguar) Land Rover has popped up on my radar on the defence expo circuit, so it was a pleasant surprise when the FEINDEF 21 organisers announced that the company would be providing a fleet of Official Delegation vehicle. To then spot two of the New Defender ~ a three-door and a five-door ~ on an unannounced stand in the main hall this morning just added icing to the cake. The three-door 90 was a standard model but the five-door 110 was presented with a military, Wolf-style wheels and a self-recovery winch plus other small military-specific modifications.

When I asked Land Rover UK’s Public Relations Department last week if reappearance on the defence expo circuit heralded a return to the military market ~ something which has been rumoured for some time ~ the official response was simply: “We don’t comment on any internal / external business relationships.” However an executive from Jaguar Land Rover Spain was more forthcoming today and confirmed the rumours I had previously heard that Jaguar Land Rover had already demonstrated New Defender to the Spanish MoD were true. As Spain is one of several nations expected to issue replacement vehicle programme tender requirements over the next two to three years, it would be surprising if Land Rover weren’t at least dipping their toes in the water… and especially so as the New G-Class and the even newer INEOS Grenadier are both looking to tap into future military Light and Medium Utility Vehicle replacement contracts.