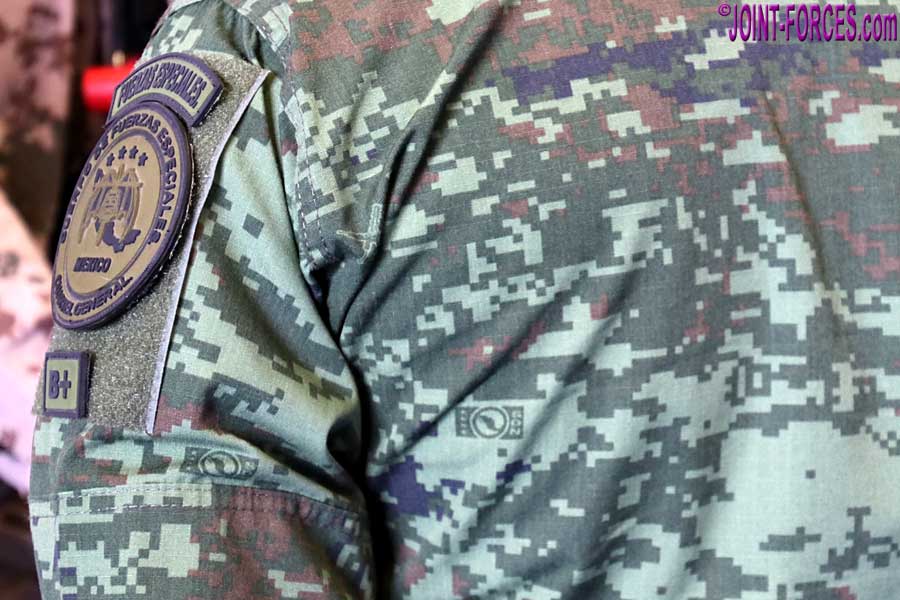 Opportunities to photograph Mexican military camouflage pattern uniforms being worn on my side of the Atlantic are few and far between, and seeing a Special Forces officer in Combat Uniform rather than Service Dress is even rarer still, so when I spotted this very senior officer at SOFEX 2022 I didn’t hesitate to snap the back of his combat jacket. And yes, I did let him know I was taking the photos and assured him his face and rank would not be revealed.

Mexico’s Corps of Special Forces (Cuerpo de Fuerzas Especiales de México) does not court publicity and much of what is published about them online in the English language does not appear to be particularly accurate or up to date, so unless / until we get the chance to work with them I’ll just make do with passing some brief observations on this camo.

Issued to Mexico’s Land Forces since 2008 as their standard camouflage pattern, though a similar digital camo in an arid colourway was introduced shortly afterwards for wear in desert theatres, this four-colour digital pattern is also worn by the bulk of Cuerpo de Fuerzas Especiales; unless operationally deployed on multinational missions, when MultiCam is usually worn. A digital / pixelated design, it consists of dark green, chocolate brown and black shades on a light green base. Two emblems, a crossed rifle and baton (?) and the SDN (Secretaria de Defensa Nacional) logo, are incorporated in the design throughout.