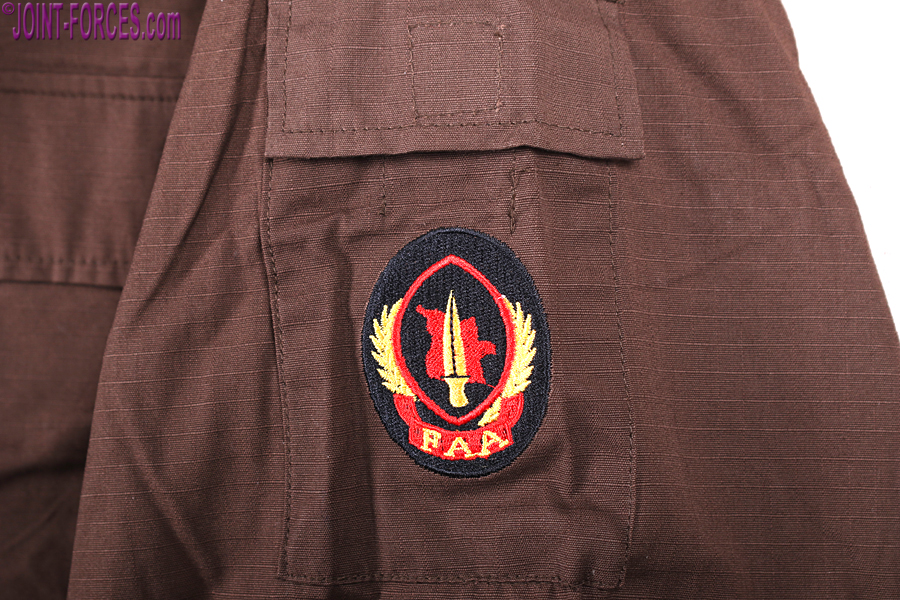 A recent newcomer on the uniform and camo collector scene, this dark brown garment with seemingly genuine FAA (Forças Armadas Angolanas – Angolan Armed Forces) badge on the left arm has been variously described as a Para Shirt or Ranger Shirt. However as the Angolan Army has not had a Parachute Battalion for over 15 years (though of course FAA SF and SpecOps do have parachute insertion capabilities) and as Angola’s anti-poaching Rangers are not part of FAA and mostly wear khaki or tan coloured uniforms with their national flag on the left arm, I was unconvinced either term was accurate.

After a good ten days of searching t’internet whenever I had some time to spare (I have no recent books on the modern Angolan Army on my shelves and reference library searches are currently impossible at present because of the pesky pandemic) I turned up just one good photograph of FAA personnel wearing dark brown shirts; however, as mentioned below, there was one minor pocket layout difference. At this stage I should mention that the fabric colour is not Nutria Brown, the shade used by South Africa from the early 1970s through to the mid-1990s, but is much darker so I consider it to be more of a chocolate brown; that said, seen through my eyes under flat daylight conditions it does not exhibit the slight reddish hue of the darkest brown shade used for MultiCam or UK MTP which most viewers of this section should be familiar with.

The similar colour brown combat shirt which I did find a good photograph of was part of a shirt, trousers and field cap uniform worn by a large number of FAA personnel on parade and was used to illustrate an article on ANGOP, the Angola Press Agency website, back in September 2017. The story was about 400 FAA officers being transferred to the Uíge National Police, “in order to continue their defence mission, maintaining order and tranquillity of the population”; Uíge is a northern province which borders the troubled Democratic Republic of Congo, formerly known as Zaire. Other than a pocket with two press stud fasteners on the upper right arm, the shirts all personnel in this photo published in 2017 were wearing looked almost identical to the shirt featured here.

The FAA combat shirt photographed here has a standing (mandarin-type) collar which buttons at the throat, but in the ANGOP photo the troops are wearing it unbuttoned with, in most cases though not all, non-pressed lapels; there are seven concealed buttons behind the full-length front flat. Other than the dark brown front buttons, the only others are one apiece at the shoulder tabs as all front pockets plus the cuffs have dark brown press stud or snap fasteners.

The four front pockets have bellowed edges for expansion and simple cover flaps with mitred corners; each is fastened by two studs. There is a zip behind the inner vertical edge of the left chest pocket and behind this on the inside is a slightly deeper and wider sack-type pocket for documents etc. The only other pocket is a small rectangular flat-sewn three-pen pocket on the upper left sleeve; its flap is fastened by velcro-style hook and loop tapes. The red and gold on black FAA badge is stitched to this pocket. Incidentally, the somewhat similar shirt worn by the FAA officers being transferred to Uíge in 2017 had a larger pocket on the upper right arm and its flap had two press studs.

As is to be expected of a combat shirt intended for duty in Southern Africa, the garment is unlined but both the shoulders and elbows have diamond-stitched reinforcement panels. There is a simple drawcord in a fabric tunnel at the waist to give the otherwise rather boxy garment some shape, but no drawcord in the hem. The only other detail is a hook and loop strip for a name tape over the top right pocket. The white label at the back of the neck, next to the F.A.A. label, states that the ripstop fabric is 100% cotton.

The example featured here was supplied by East-West Trading through the WholesaleArmySurplus wing of the business.