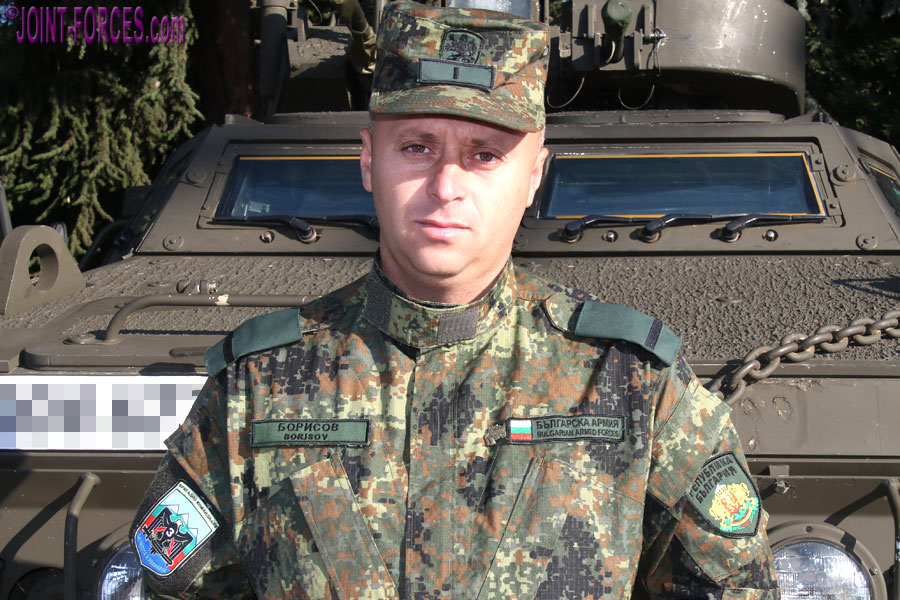 In 2018 Bulgaria’s Ministry of Defence introduced a new camouflage pattern for their Air Force and two more patterns for the Bulgarian Army, reports Bob Morrison.

Prior to the recent HEMUS 20 defence expo in Plovdiv I had only very occasionally encountered Bulgarian Army personnel, and never in a situation where I was able to ask a soldier to pose for four-view camo uniform shots. Fortunately at the expo there was a small team of uniformed soldiers manning a static display of two wheeled armoured personnel carriers – an M1117 Guardian and a Textron Commando Select – and one of them kindly agreed to pose for us.

The new Bulgarian Land Forces [Сухопътни Войски на България or Sukhopŭtni Voĭski na Bŭlgariya] M18 Temperate Pattern camouflage (there is also a lighter Arid version) was first introduced in 2018 and is now on widespread issue. Technically, M18 could be described as a five-colour digital pattern but close inspection reveals that the small irregular shapes which make up the larger patches of colour are not true squares and they have rounded edges, so it is not really a pixellated design; digital hybrid might be a better way of describing it.

Interestingly, M18 uses five colours that are very similar to those of German Flecktarn (officially designated Fünf Farben-Tarndruck der Bundeswehr or Five Colour Camouflage Print of the Bundeswehr) though without comparing large areas of both patterns side by side under the same lighting conditions I cannot confirm if the shades and proportions are identical. I have included a library photo of Flecktarn for simple comparison, but bear in mind that this was shot lying flat under studio lighting whereas the back panel of the Bulgarian combat shirt was shot vertically in very bright sunlight. Both patterns use a light grey, a pea green, a dark green, a russet brown and black but the Bulgarian shades appear less ‘punchy’ – though this might just be down to different fabrics and also my Flecktarn swatch being unworn and unwashed.

At first it might seem strange that Bulgaria has opted for a north-western Europe style of temperate camouflage pattern, but when one looks at a topographical map of the Balkans region one realises that away from the Maritsa river central west-east plain and the Danube river plain to the very north, much of the country is quite mountainous and actually not too different from parts of central and southern Germany. Additionally, none of Bulgaria’s five close neighbours on the Balkans Peninsula issues anything close to a Flecktarn-style uniform, so national identity is preserved with this new camo.

Unfortunately I was unable to photograph the third M18 camouflage, the three-colour Arid pattern which appears to be similar to German Tropentarn desert camo, as that is only issued to troops operationally deployed to hot climatic zones. The Bulgarian Navy does not currently have its own camouflage pattern and the naval uniforms I saw at HEMUS 20 were plain black.