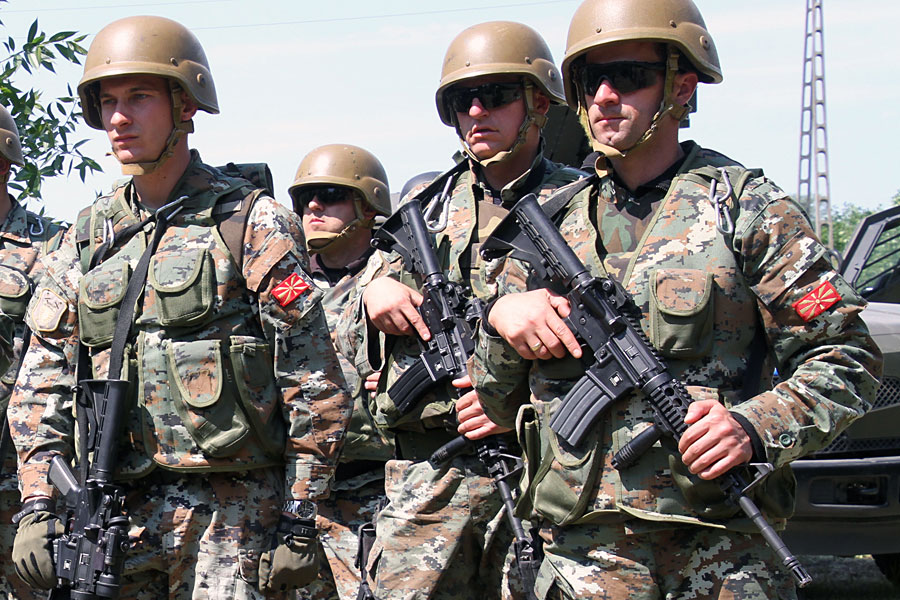 For those who may be unsure on the geography side North Macedonia, which was known from 1991 as the Former Yugoslav Republic of Macedonia (FYROM) until a dispute with Greece over the use of the historic regional name Macedonia was settled in 2019, is a landlocked Balkans country bordered (clockwise, from the north-west) by Kosovo, Serbia, Bulgaria, Greece and Albania.

This comparatively small nation of around two million inhabitants has had an all-professional Army, numbering around 8,000 personnel, and Air Force since 2005 and had worked alongside NATO since joining the Partnership for Peace (PfP) programme a decade before. It has participated in the United Nations UNIFIL mission in Lebanon, the EUFOR Operation ALTHEA mission in Bosnia and Herzegovina, Operation IRAQI FREEDOM in Iraq and ISAF in Afghanistan; on this last operation, in 2006 a mechanised infantry company served under British command in Helmand Province as the Balkans nation worked towards acceptance for NATO membership.

In 2016, during the Polish Exercise ANAKONDA and the linked NATO field exercises, I had the opportunity to photograph [North] Macedonian Army personnel wearing the M09 Temperate Pattern camouflage uniform, first during the multinational crossing of the Vistula at Chełmno and then one week later on Drawsko Pomorskie Training Area, 225km to the west. At Chełmno a small contingent of [North] Macedonian troops was embedded, along with a Bulgarian contingent, in the US-led multinational Military Police Task Force 709 which was responsible for marking and securing the route for an American passage of Polish lines and on DPTA a [North] Macedonian company group was part of an eight-nation multinational armoured brigade battlegroup.

The [North] Macedonian M09 Temperate camo is a four-colour digital pattern with olive green as the primary shade, reddish brown as the secondary colour and smaller tertiary areas of light stone and black; when in the shade the light stone appeared to have a duck-egg blue tint, but as I do not have a swatch of this material to assess under different lighting conditions I am unsure if this is just an optical illusion. In my opinion M09 is in many ways similar to the Jordanian KA2 digital patterns, albeit with a very different colour balance to suit the Balkans terrain and vegetation. In field conditions colour parallels can be drawn with the old US M81 Woodland pattern and its variants.

In Poland I was unable to take the usual four-view set of images – just as I was about to photograph a [North] Macedonian MP volunteer ‘model’ his unit had to move out for their next task – but hopefully the accompanying shots will suffice instead. The above shots of a Military Policeman at the river crossing site were taken early in the morning, mostly in shade with a very low sun. Note that his body armour cover, just visible under his load vest in the rear shot, appears to be in M81 Woodland pattern.

The next three images were taken at Drawsko Pomorskie and show members of a [North] Macedonian Light Infantry platoon who participated on the Combined Arms Live Fire Exercise or CALFEX in mid-June 2016. Combat jacket and trousers, plus load carriage vest, worn by all [North] Macedonian troops in this article were in the M09 Temperate Digital Pattern camouflage fabric (I have not yet had the opportunity to photograph M09 Arid pattern in the field). The load carriage vests worn by [North] Macedonian troops and MPs, on top of their body armour, were of identical design with four lower magazine pockets, two grenade pockets on the chest, a water bottle pouch on the rear right hip and a small integral pack for waterproofs etc. on the upper back.

The standard assault rifle for [North] Macedonian infantry is the Yugoslav M70 variant of the AK-47 but Military Police carried the M4. With the exception of ANAKONDA 16 patches, distributed to foreign troops during the second exercise week, the only insignia worn were national flags on the upper left arm and on the MP helmets though some MPs wore MILITARY POLICE (ВОЕНА ПОЛИЦИЈА) patches on the right arm. The infantry I photographed had been manning trenches on Bucierz Ranges closest to the tribune and I did not spot which vehicles they were using, but the MPs with MPTF 709 used up-armoured Hum-vees; I have included images of a couple of these here for vehicle aficionados.