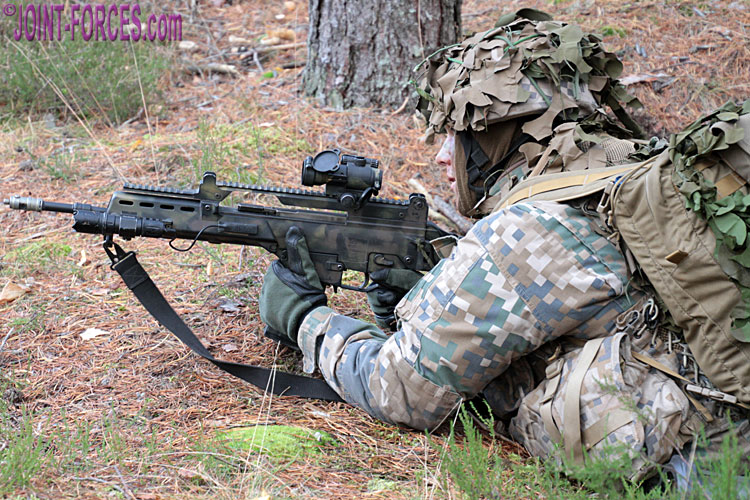 The Latvian M07 LATPAT camouflage design, originally classified as National Armed Forces (Nacionālie Bruņotie Spēki) pattern but now designated LatPat or LATPAT even on official documentation, was suitable for arid theatres where troops were operationally deployed but the lack of any green in the colourway meant it was not ideal for use at home in the Baltic Region during the warmer and drier seasons.

In 2011 the Latvian MoD set about producing a five-colour variant of M07 LATPAT to address this issue and in 2016 the first uniforms in what is now designated M16 Multi-LatPat or Multi-LATPAT were fielded. For this new five-colour pattern, possibly referred to as Multi-LatPat because the overall effect bears a passing resemblance to MultiCam even though large ‘pixels’ shapes are used, a green shade was introduced.

The base colour of M16 LATPAT is still a light stone shade which, using an X11 web colour HTML name, I would described as X11 Linen and the two darker of the brown colours are in my opinion still X11 Peru (i.e. a brown ochre) and X11 Tan (i.e. a light earth). I reckon the new green shade is close to X11 OliveDrab, though it quite quickly takes on a faded appearance, and the tertiary last colour included to give the perception of depth to the pattern is still a near black or charcoal shade which appears to be close to X11 DimGray. As luck would have it the jacket back panel featured here, worn by the only soldier in Multi-LATPAT not wearing a load vest who I was able to photograph in the field during SILVER ARROW 17, only had green ‘pixels’ at the top and bottom whereas most other areas of the pattern have quite a good proportion of green.

In the field some troops on SILVER ARROW 17 adorned their helmets with scrim to break up the outline and others wore their green helmets with just a paracord net to which foliage could be attached if necessary. Although I was on the lookout for them, I did not spot any M16 Multi-LATPAT helmet covers being worn on the 2017 exercise but in Estonia last May, during KEVADTORM 19, five-colour helmet covers were the norm. Load vests and most pouches worn in 2017 and 2019 were also the older M07 pattern, and indeed these were recently (April 2020) worn on exercise with the new M20 WoodLatPat uniforms. An issued tan coloured fleece cap is usually worn under the helmet and this can also be worn on its own to keep the head warm in colder weather.

A five-colour field cap with embroidered national armed forces emblem can also be worn; during SILVER ARROW 17 I photographed Brigadier General Ivo Mogilnijs, Commander of the Joint Headquarters of the Latvian National Armed Forces, wearing one of these – note how the pattern on the brigadier’s jacket is markedly more faded. Although five-colour M16 Multi-LatPat, which replaced M07 LatPat, has now been replaced by M20 WoodLatPat it is not beyond the bounds of possibility that the earlier patterns might still be issued for troops deployed to warmer climes on Peace-Enforcing missions.

In the final article in this mini-series I plan to take a very brief look back at Latvian troops wearing US M81 Woodland pattern in 2002.