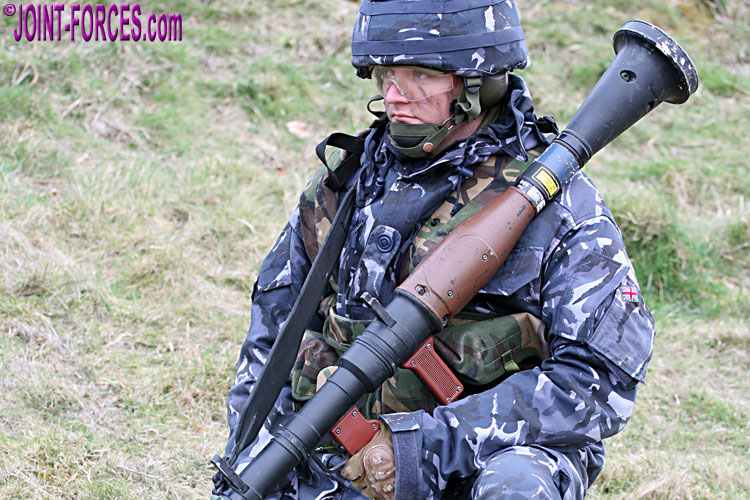 Some forty years ago the US Army introduced dedicated OpFor, or Opposing Forces, units who wore different uniforms and used different tactics from those troops in formations undertaking set-piece training programmes at the then new National Training Center at Fort Irwin in California, and later in the 1980s this concept was adopted to some extent by the British Army, first on Salisbury Plain and then at BATUS (British Army Training Unit Suffield) in Canada.

The uniforms the American OpFor wore at NTC when portraying conventional troops were predominantly black coveralls, similar in some ways to those worn by Warsaw Pact armoured forces, and indeed the USAREUR OpFor conventional troops role-players at JMRC (Joint Multinational Training Center) Hohenfels in Germany wear similar black uniforms today. British OpFor troops on large field training exercises, on the other hand, started wearing surplus Desert DPM (Disruptive Pattern Material) not long after the 1991 Gulf War, a conflict which that particular derivative was introduced for, and they continued to do so well into the last decade.

In 2014, during the Airborne phase of Ex JOINT WARRIOR 14-1 in Scotland, I photographed OpFor troops clad in Desert DPM, but I thought it noticeable that their uniforms did not contrast particularly well when after the action was over they were alongside the main force clad in MTP; this is understandable as to some extent the two camouflage patterns have some colours and shapes in common. The above poor quality photo, taken at very long range with a 300mm lens and then cropped, shows a British OpFor soldier during JW14-1 wearing Desert DPM uniform and MTP helmet cover with olive green SAWES (Small Arms Weapons Effect Simulator) receptors over his combat jacket.

By March 2015, with MTP (Multi-Terrain Pattern) uniforms now having totally replaced Temperate DPM and Desert DPM uniforms no longer in production, the Demonstration Battalion of infantry based on Salisbury Plain who regularly provided OpFor personnel for large exercises appeared wearing blue uniforms instead. Throughout the three days of Combined Arms Demonstrations (CAD) run at the conclusion of Exercise TRACTABLE 15, a platoon of soldiers from 1st Battalion The Yorkshire Regiment clad in blue 4-colour DPM (Disruptive Pattern Material) combat uniforms defended objectives during the blank firing phases as the Lead Armoured Task Force attacked. The uniforms these troops wore were not surplus garments, as seen on previous exercises, but new ones tailored in PCS-CU style.

In 2011, when Multi-Terrain Pattern (MTP) camouflage fabric was introduced by UK MoD a new design of combat clothing known as Personal Combat System – Combat Uniform (PCS-CU) was also introduced to replace the CS95 (Combat Soldier 1995) designs. Inspection of the cut of cloth and the pocket placement revealed that the blue combat smock and trousers worn by OpFor troops on the 2015 CAD were based on PCS-CU rather than CS95 or earlier British DPM uniform styles.

The predominantly blue/grey shades of the new OpFor uniform offered a complete contrast to the earthy and slightly verdant colours of MTP, so they were a logical choice to dress ‘enemy’ in for for rural settings. However even though these ‘Men In Blue’ usually stood out against green or dried foliage like the proverbial turd on a billiard table, in a gloomy urban setting their camouflage could work in their favour. Indeed this blue version of DPM, though originally produced as a naval camo, has been quite widely adopted internationally as a police and gendarmerie camouflage pattern for urban use.

On simple logistics grounds UK OpFor troops on exercises were frequently armed with SA80 assault rifles plus GPMG and Minimi machine guns, but to mimic the real-life opposition they were issued with laser simulation RPGs. Prior to 2016 the odd AK-47 assault rifle could also be found in the mix, but at the CAMD (Combined Arms Manoeuvre Day) on Salisbury Plain in the October of that year it was noticeable that AK-74 family weapons were being carried by both ‘Men In Blue’ representing conventional OpFor and ‘Little Green Men’ unconventional troops of the type first seen deployed during the 2014 Russian Federation incursions into Ukraine.