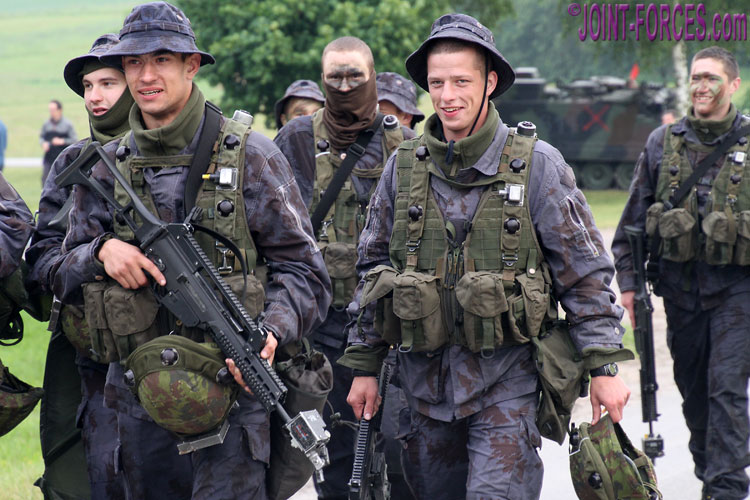 In this third article on Lithuanian M05 Miško or Forest pattern camouflage, blue and not green is the dominant colour worn by these OpFor troops in 2017, writes Bob Morrison.

On many large scale field training exercises (FTX) where the ‘enemy’ or Opposing Forces, OpFor in military terms, is provided by troops from another unit who would normally wear the same national uniform as the main force, it is not unusual for them to be dressed in different combat jackets and trousers to help differentiate the bad guys from the good.

In the case of the British Army, from just after the 1991 Gulf War until relatively recently it was quite common for troops in the OpFor role to wear Desert DPM camouflage when the main force wore Temperate DPM or MTP (Multi-Terrain Pattern) but from 2015 onwards the Demonstration Battalion based on Salisbury Plain and the OpFor team at BATUS in Canada started wearing the blue version of DPM. During the combined national and NATO exercise IRON WOLF / SABER STRIKE in 2017, Lithuanian OpFor troops appeared in blue uniforms and I was lucky enough to bump into some of them while undertaking a recce of potential helicopter landing sites in the Suwalki Gap prior to an air assault by a combined Polish, UK and US task force.

It was only when I was able to look closely at these uniforms worn by Lithuania’s ‘Men In Blue’ that it becomes apparent that they were actually garments in the standard M05 Miško (Forest) pattern which had been dyed dark blue. As a result the original green and black shapes plus the outline edges in the light base colour had turned bluish grey, leaving only a very slight shade difference between them, and the reddish brown patches which had become what might best be described as a muddy slate grey shade. Although not ideal as rural camouflage, just like British ‘Men In Blue’ OpFor DPM uniforms these Lithuanian garments probably work well in an urban context.

The Lithuanian OpFor (Opposing Forces) facing the British-led TASK FORCE 45, named after 45 Commando RM, on the multinational exercise in June 2017 wore blue combat jacket and trousers plus bush hats but they kept the standard green M05 pattern covers on their helmets and wore their normal olive green load carriage vests with pouches in the same colour. Over the top of their uniforms they wore surplus, probably ex-US, MILES (Multiple Integrated Laser Engagement System) sensor harnesses along with helmet bands, also in olive green. During the day they mostly wore olive green T-shirts beneath the jackets, but overnight and until the sun warmed they air mostly wore thick green zipped fleeces as a mid layer. The only markings I spotted on OpFor troops were a small dyed national flags on their upper sleeves.

Incidentally, although this combination of bluish and greenish shades contrasted markedly with the background in open countryside when the sun was out, it actually worked reasonably well at dawn and dusk – the classic attack times – for troops in static positions in ditches and treelines.

As we have seen before, the standard assault rifle for Lithuanian infantry is the Heckler & Koch 5.56mm G36, which superseded the Swedish AK-4 variant of the H&K 7.62mm G3. However since 2015 the designated sharpshooter in an infantry section has been issued the 7.62mm FN SCAR PR (Precision Rifle). The soldier on stag manning his OpFor platoon position’s 12.7mm M2 Browning Heavy Machine Gun mounted on a Sustained Fire role tripod carried a SCAR. Incidentally, although this MG post overlooking a key road junction and pointing down a road the counter-attacking troops were expected to try to seize appears to be carelessly positioned on a hilltop it was actually shielded by temporary defensive works; to avoid damage to early summer crops troops were forbidden from digging trenches on agricultural land and had to use crude sangars instead.