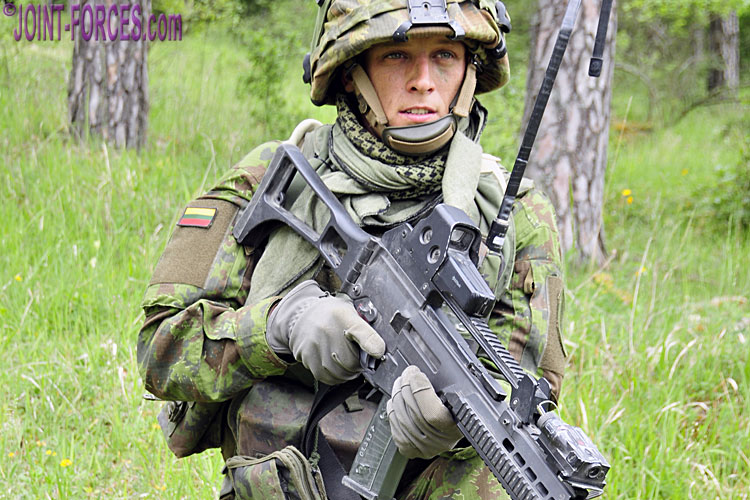 Developed in 2003, Lithuanian M05 Miško pattern has been widely issued to the Lithuanian Land Forces or Lietuvos Kariuomenės since 2005, writes Bob Morrison.

In the first part of this trilogy I looked an operator from the Lithuanian Special Operations Force (LITHSOF) wearing M05 Miško, or Forest, pattern camouflage uniform and in this article Carl and I turn our cameras on more conventional troops from the Baltic nation’s Iron Wolf Brigade.

First a little on the recent history of Lithuania. For around half a century, commencing near the outbreak of World War II but interrupted by about four years of Nazi occupation during the war years, Lithuania was subject to Soviet Russian domination until it declared independence in March 1990 and became the first breakaway republic from the Soviet Union. In January 1994 the NATO-sponsored Partnership for Peace (PfP) programme was established in an attempt to build trust between the Alliance and the former Soviet Union plus its Eastern European satellite states and within a couple of weeks of its formation Romania joined as the first non-NATO partner with Lithuania joining next day as the second.

Shortly after independence the Lithuanian Armed Forces adopted a four-colour amoeba-type pattern of bottle green, chocolate brown and russet shapes on a tan background which was similar to some earlier Soviet patterns, though the shapes were not as condensed; under some lighting conditions and when garments are faded the brown and russet shapes can be confused as the same colour. Once they started participating on PfP multinational exercises and began working towards NATO membership the Lithuanian Army adopted US M81 Woodland camouflage pattern but by the time they formally joined the Alliance in March 2004 uniforms in the unique four-colour disruptive M05 Miško pattern, designed to blend in with the colours of their national topography and vegetation, was almost ready for fielding. As mentioned in Part 1, although M05 Miško is a four-colour, hybrid jigsaw / leaf pattern, only three distinct colour rollers are used – russet brown, verdant green and black – with deliberate misalignment of the colour blocks allowing the uncoloured light tan base material to edge the shapes and provide an illusion of depth.

The soldier posing for the four-view gallery above was an infantryman serving with the Iron Wolf Mechanised Infantry Brigade, which has participated on the ISAF mission in Iraq, but these shots were taken in May 2014 by Carl during Exercise COMBINED RESOLVE on the Hohenfels Training Area in Southern Germany, where the colours worked well against a late spring backdrop.

The Iron Wolf (Geležinis Vilkas )Mechanised Infantry Brigade is Lithuania’s largest and lead Army formation now consisting of four Mechanised Infantry Battalions, including one Hussar and one Uhlan, an Artillery Battalion and the NATO multinational eFP Battle Group Lithuania. The brigade’s name and patch are adopted from a medieval wolf legend relating to the city of Vilnius. The soldiers in three of the above images were serving in Estonia with the brigade’s Grand Duchess Birutė Mechanised Uhlan Battalion during the multinational Exercise KEVADTORM 17. The officer in the fourth image, taken in Lithuania during Exercise IRON WOLF 17, served with the General Romualdas Giedraitis Artillery Battalion, as evidenced by her battalion patch on the left upper arm. Standard assault rifle is the Heckler & Kock 5.56mm G36.

In this last image we see three Lithuanian ‘Yellow Force’ soldiers, in Estonia last year during Exercise KEVADTORM 19, in conversation with a Finnish combat engineer (centre) and with an Estonian umpire watching on. It is interesting to compare the variations in camouflage patterns of three neighbouring armies in the Baltic region – though bear in mind that, unlike the other four troops, the umpire has not been living and fighting in the field for over a week so his uniform is markedly cleaner.