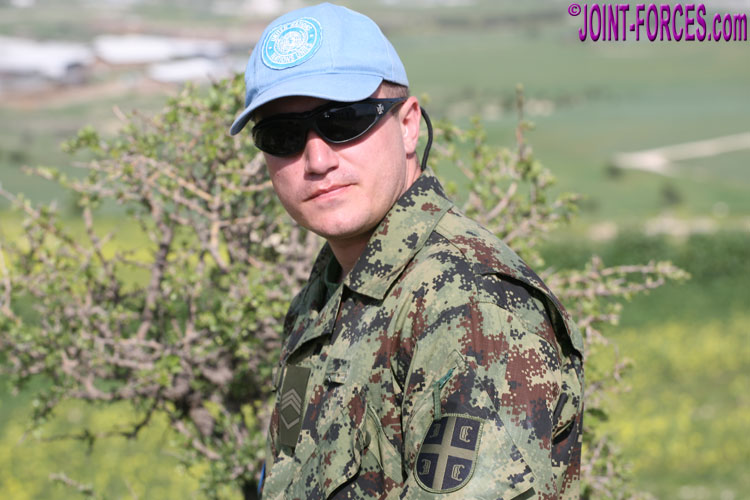 In this fourth part of the mini-series focusing on camouflage uniforms worn by members of the United Nations at the time of the 50th birthday of UNFICYP I start with a look back at the Serbian Contingent, or SERBCON, which served with the Sector 4 formation in the Cypriot Buffer Zone and supplement the feature with photos taken a few weeks later in Germany by Carl during Exercise COMBINED RESOLVE 14.

The uniform worn in spring 2014 by the 45-strong reinforced platoon of UNFICYP SERBCON peacekeepers, who served under Slovakian Contingent (SLOVCON) command in Sector 4 at the eastern end of the Buffer Zone through Cyprus, was the woodland or temperate digital pattern introduced in 2010 and designated Model – Maskiranje Dezen Uniforme – 2010, or M-MDU-10. Although Serbia had trialled a desert theatre digital camouflage pattern a few years before, and small contingents of personnel deployed on UN duties to arid areas had previously worn foreign desert pattern uniforms such as Bulgarian 3-colour DDPM, at the time of my last trip to Aphrodite’s Island troops were only issued standard M-MDU-10 pattern uniform. With SERBCON being such a comparatively small detachment deployed overseas it was at first not financially viable to produce M-MDU combats in desert colours, but by late 2015 Serbia had increased its UN mission participation to such an extent, including in Lebanon, that issue of uniforms in a three-colour digital desert pattern was now feasible.

This unarmed Serbian peacekeeper was photographed while undertaking a familiarisation patrol out in the Buffer Zone in early March, when Cyprus was at its most verdant, so his uniforms blended in reasonably well. As daytime temperatures were well above 20C once the sun burned off the morning mist SERBCON troops also wore M-MDU-10 pattern T-shirts underneath their combat jackets and these sported the same insignia. The patches immediately below – low visibility national badge, national flag with UN badge and rank insignia – were all photographed worn on a T-shirt.

Looking into the history, around the time of the break-up of Yugoslavia a new five-colour oak leaf camouflage pattern, designed in 1989, was widely introduced across the JNA (Yugoslav National Army) and in due course Serbia inherited this as its M89 pattern. This camo consisted of three shades of green plus reddish brown and black. Around 2001 one of the green shades was dropped and replaced with light tan. This camo, which was slightly tweaked a couple of times, was designated Model – Maskiranje Dezen Uniforme – 2002 (i.e. Model 2002 Camouflage Design Uniform) and abbreviated to M-MDU-02. The photo at the very foot of this page is of a Serbian soldier wearing the analogue M-MDU-02 pattern, taken in 2008 by our sadly missed friend and colleague Yves Debay who was assassinated in Syria seven years ago on 17th January 2013.

Now roll on a couple of months and move to Germany.

In 2010 a pixellated version of this five-colour woodland-type camo was introduced, with shades and area percentages being not too dissimilar, under the designation M-MDU-10. The colours of this new digital camo, which by 2014 was in widespread use, are a light stone/tan shade, bottle green, pea green, reddish brown and black. The pixels are not unduly large; unlike, for example, Slovakia’s Les and Pust patterns introduced in 2007. In Carl’s above four-view shots, taken in Germany during COMBINED RESOLVE 14, the lightest shade appears greenish but this is an optical illusion as very light shades take on the hue of their surroundings; this, of course, being the primary reason they are used.

The above two insignia photos, taken by Carl, are of patches worn on the combat jacket by the Serbian soldier on the NATO multinational exercise in Germany.