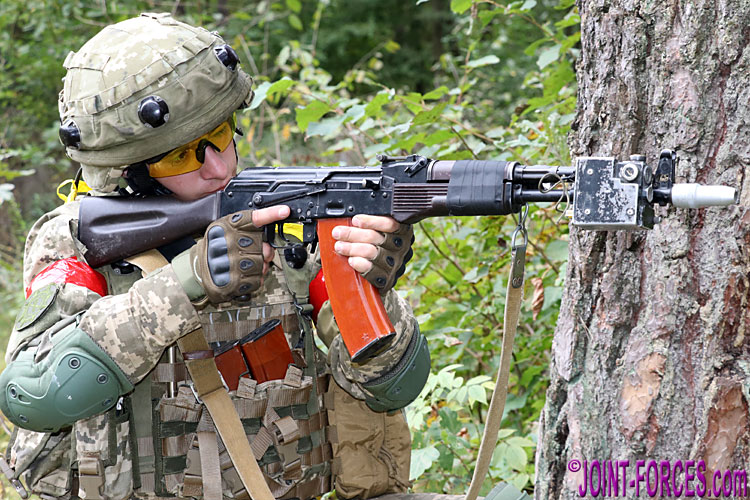 From national independence in August 1991, following the fall of the Iron Curtain and dissolution of the Warsaw Pact, the armed forces of Ukraine mostly continued to wear the same ex-Soviet camouflage patterns as before until 2014, when the Russian Federation annexed Crimea and then Russian troops infiltrated Ukraine’s eastern provinces in support of armed insurgents.

The troubles in 2014 led to the Ukrainian armed forces temporarily and hurriedly adopting several different uniform camouflage patterns, including MultiCam and even British MTP, as they fought off further annexation but in the meantime they continued to develop at least two distinctive digital patterns first spotted in 2013. One of this pair was a Woodland or Temperate pattern of predominantly greens and browns with black, and the other has been described as being an Arid or Desert pattern, though I believe this is actually the M14 Digital Pattern which I recently photographed in widespread use during Exercise RAPID TRIDENT 19 on the Yavoriv Training Area.

Close inspection of this homegrown camo shows it to be five-colour, on a light tan base with three shades of olive for visual disruption plus small near-black shapes for depth. My initial impression is that while this might not be the best of uniform colours for operations through dark and verdant woodland, out on the open steppes it certainly seems to work as well as MultiCam and in broken-down urban environments it looks to be pretty effective too. As the base colour is light it tends to both reflect the colour balance of its surroundings and pick up the warmth of the light to help the stationary soldier blend in better. Although in some ways similar to the much-disliked US Army UCP, the larger ‘pixels’ and the additional shades used in the design of the Ukrainian camo have, in my opinion, taken it to another plane.

In addition to UBACS (Under Body Armour Combat Shirt) and Combat Trousers in M14 pattern, this Ukrainian mountain assault brigade soldier wears a helmet cover, load vest and cargo pouches in the same pattern; his first aid pouch is olive. He also wears an olive green laser simulation vest and helmet harness over the top. His assault rifle, with laser simulator, is a fixed stock 5.45x39mm AK-74. Boots are standard issue, Ukrainian-made.

In my future RAPID TRIDENT 2019 features this interesting camouflage pattern is likely to pop up again in its natural environment, giving readers a chance to assess for themselves if it is better than the US Army UCP camo which I suspect may have influenced it.