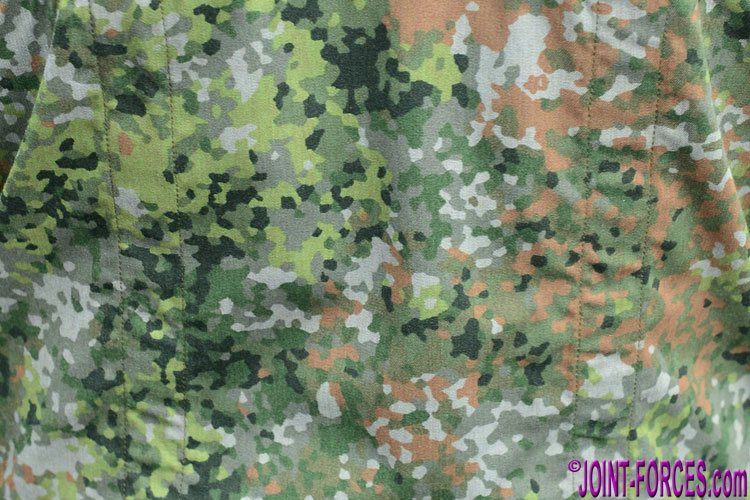 It is intended that eventually the new NFP ( Netherlands Fractal Pattern) camo family will consist of four related theatre- or service-specific designs, of which two have been finalised, a third (Navy) is under development and a fourth (NFP Arctic) is being considered.

First suggested in 2011, and developed in-house over an eight-year period, the patterns were digitally created using photographs of different backgrounds in various theatres of operation. The intention was to replicate nature by using fractals – widely occurring small and large geometric repeating shapes of different scales – to confuse the eye.

According to published unclassified Dutch MoD sources, the four new patterns are:-

A fifth pattern, NFP-Multitone, has been developed for packs and load carriage equipment etc., which are produced from coarser fabric than uniforms and therefore cannot replicate the finer detail which the uniform fabric camo can. NFP-Multitone incorporates colours from both NFP-Green and NFP-Tan, but is a little less ‘busy’ than the uniform patterns plus it only has four colours rather seven.

The initial issue of NFP-Green garments was earlier this year, in the form of coveralls for the Dutch tank crews of 4th Company of the combined German-Dutch 414 Tank Battalion (Panzerbataillon 414 or 414 Tankbataljon) who operate the Leopard 2 A6MA2 main battle tank. Last Wednesday, at ILÜ LandOp 2019, Carl spotted a Dutch NCO wearing coveralls in NFP-Green and photographed him from the front for a full-length view and from the rear to obtain a reasonably large swatch of fabric over his back. Close inspection shows that this version is a predominantly verdant seven-colour pattern comprising Light Olive, Olive Drab, Pea Green, Olive Green, Bottle Green, Russet Brown, and a near-black Dark Green. To my eye this camo looks a lot like Flecktarn, the standard German five-colour temperate pattern, but Carl (who unlike myself has seen it up close on troops) assures me the Dutch pattern is much smaller and the overall effect is different.

Carl was also able to photograph swatches of all three current patterns, plus examples of load carriage equipment, at the 5th Anniversary of Germany’s Division Schnelle Kräfte (DSK) at the end of August where NFP was displayed on one of the stances. The NFP-Tan is also a seven-colour pattern but, as its name suggests, it is more sandy than verdant even though it still has greens in the mix. Close inspections of the colours shows them to be, in my opinion, Stone, Light Earth, Dark Earth, Light Olive, Olive Drab, Bottle Green and Dark Chocolate. It seems to me that this pattern is overall close in colour to MultiCam. The four-colour NFP-Multitone is intended for wear with either NFP-Green or NFP-Tan uniforms and its colours are Light Earth, Dark Earth, Light Green and Bottle Green. Everyone’s eyes see colour shades slightly differently, and the photos I am working from were shot in slightly differing light conditions, but I believe I have got these just about right.

These three primary patterns – two for uniforms and one for equipment – should be rolled out across the Royal Netherlands Army (Koninklijke Landmacht) over the next year or so.