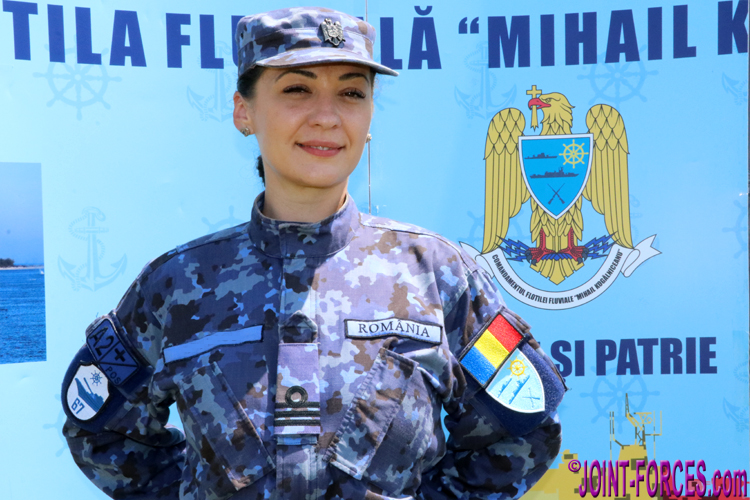 Romanian Navy personnel seen on SABER GUARDIAN 2019, mostly from the River Flotilla, were wearing their own branch’s version of the M2017 camouflage, writes Bob Morrison.

Everyone views fabric colours slightly differently and changes in lighting can affect how we perceive specific colours. I would describe the new Romanian M2017 Navy pattern shades as being Slate Grey, Blue Grey, Light Grey, Light Blue and Charcoal, with the difference between the first two colours only really being visible to the eye when viewed close up; in bright lighting conditions the slate and blue variations of grey on abutting patches tend to merge into each other when viewed from more than a few feet away, resulting in what can appear to be an overall four-colour pattern. The lightest of the five shades appears quite a vivid blue when the uniform is relatively new, but after long exposure to the sun and repeated washing it begins to lose it colour and becomes closer to a light stone shade and likewise the near-black charcoal shade fades to less dark. All images on this page were taken on or around midsummer’s day 2019, in very bright conditions.

The Romanian Navy officer in our lead photo holds the rank of Căpitan and though in a headquarters role here, her past career was spent with the monitors of 67 Gunboat Squadron from the River Flotilla tasked with defending the lower reaches of the Danube and its delta on the Black Sea Coast. Consequently, she wears the 67 Squadron patch on her upper right arm. On her left arm she wears the patch of the Flotilla beneath the national tricolour. I will try to briefly focus on this interesting side of the Romanian Navy in a future article once the logjam of other topics on file clears a little.