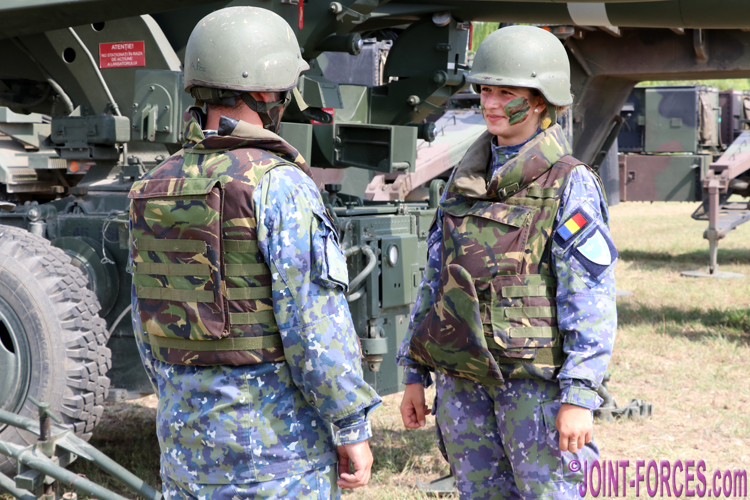 Prior to the introduction of the three new camo patterns, which began to be rolled out in 2017 and are now almost universally worn by all Romanian personnel, a variation of British DPM (Disruptive Pattern Material) camo combat uniform was worn by both Army and Air Defence personnel. The new M2017 Air Force pattern colours are Foliage Green, Slate Blue, Blue, Light Blue and Stone; the shapes are irregular and though basically a blue pattern the green shade is prominent. Although M2017 Air Force uniforms are now the norm for the Hawk battery crews (SAM-6 and SAM-8 air defence vehicle crews wear M2017 Land pattern) the body armour and load carriage vests worn are still DPM and I did not spot any personnel wearing Air Force pattern helmet covers. When not wearing helmets, the standard headgear is either a field cap in matching camo or a powder blue beret. Under the combat jacket troops wear a powder blue short-sleeved polo shirt with large camo material patches over the shoulder. The national flag is sported on the left sleeve pocket flap, often with removable unit patch underneath, and a blood type patch is worn on the right sleeve pocket flap. Combat boots are black.

The focus of my next Kit & Camo series article will be M2017 Romanian Navy pattern.