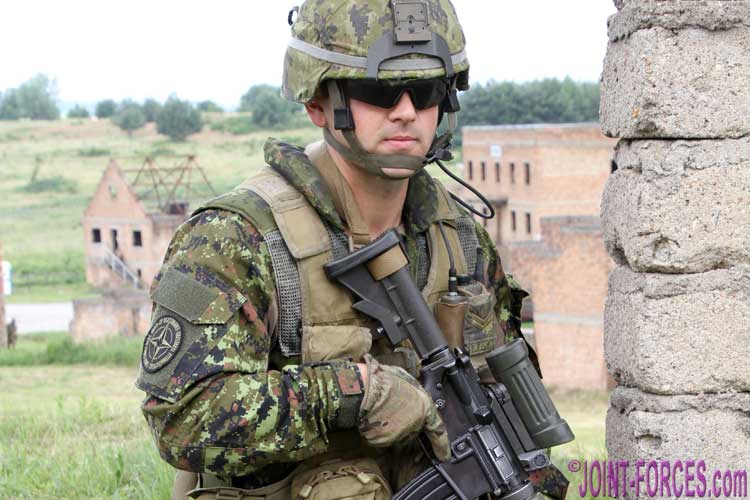 Around 1996 Canada’s Department of National Defence produced CADPAT, the first of an international avalanche of digital or pixellated camouflage patterns, writes Bob Morrison.

Patented and trademarked as CADPAT (as in Canadian Army Digital PATtern) this disruptive, rather than mimetic, scheme was originally produced in Temperate Woodland (TW) shades, with the first clothing items being covers for a new design of ballistic helmet introduced in 1997.

New combat uniform garments manufactured from cloth in the computer-generated CADPAT (TW) colours started to appear towards the end of the millennium and by late 2002 all Canadian Army units had been issued with camouflage clothing to replace their earlier drab olive green uniforms; prior to this only Airborne personnel wore camouflage pattern combat garments in the form of jump smocks in British DPM, which in the mid-1970s replaced the wartime Denison Smock. In addition to the Temperate Woodland camo, the Canadian design team also developed an Arid Regions or AR version of this new digital pattern using more sandy shades; both (TW) and (AR) variants are used to this day. CADPAT (TW) made its operational début in September 2001, in Bosnia-Herzegovina on Operation PALLADIUM ROTATION 09, and CADPAT (AR) had its operational début in Afghanistan with the Immediate Reaction Force (Land) serving under ISAF.

Generated by computer, CADPAT (TW) is a four-colour design consisting of olive green, light green, reddish brown and black rectangular ‘pixellated’ shapes; the darker green shade is the primary and the lighter green the secondary with the black, which creates the illusion of depth, and brown being lesser in area. From more than a few metres away, the square edges of the pattern are undetectable by the human eye and the general effect is not dissimilar to German Flecktarn, though the green shades are less pastel. The CADPAT (AR) desert or arid theatre variant is three-colour, with reddish sand and red ochre on a stone background.

The infantry corporal (caporal) featured here, photographed at the Wedrzyn Training Area urban complex in Poland during Ex. ANAKONDA ’16, is from the prestigious French-Canadian Royal 22e Régiment (or Royal 22nd Regiment) which is nicknamed the ‘Van Doos’; as anyone who studied even basic French at school will be aware, vingt-deux means twenty-two. In addition to the low visibility version of his national flag on his upper left arm, on his right arm he sports the circular patch of the Operation REASSURANCE Land Task Force; Op REASSURANCE is the Canadian Armed Forces contribution to support NATO assurance and deterrence measures in Europe.

The Van Doos cap badge was photographed on the beige Special Forces beret of a Canadian Special Operations Regiment trooper; although the CSOR has its own winged dagger badge, its personnel wear their parent unit cap badge on their berets.