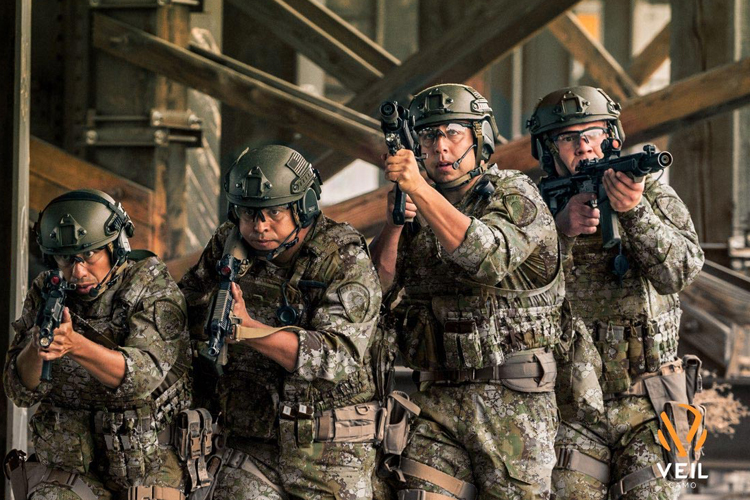 California-based clothing and load carriage designers and suppliers 5.11 Tactical have teamed up with VEIL Camo of Kansas to introduce a new camouflage pattern, writes Bob Morrison.

The new GEO7 camo pattern, which is currently available in two versions known as GEO7 Terrain and GEO7 Night, was introduced at last year’s SHOT Show in the USA but our first opportunity to handle and photograph garments did not crop up until the recent IDEX 2019 in the United Arab Emirates. On their large indoor stand the company had tactical shirt, tactical trousers (pants) and UBACS (Under Body Armour Combat Shirt) display samples in the GEO7 Terrain version and they allowed us to take one of the shirts out into natural light to photograph it without the unnatural cast of indoor lighting.

It is often said that every ally and opponent in the world is now dressed in Crye MultiCam camouflage, and while that is a bit of an exaggeration it is fair to say that a high number of armies around the globe now either wear this effective camo pattern or one of its many variants or near clones. As a result 5.11 decided to offer something a little different which incorporates latest thinking on camouflage pattern design (the original MultiCam design is now close to 20 years old) but is not as outlandish as some of the more recent concepts.

My initial impression on viewing GEO7 Terrain from several metres away was that is was a mimetic pattern cross between lichen and pebble. Up close it is clearly much more complex than this and the further away one stands the more the outline breaks down, though as always the straight edges of pocket flaps and overlapped reinforced seams reduce the effect (as do the straight lines of equipment straps when worn on top). At this point I have to stress that I have not seen with my own eyes a person wearing this camo against different terrain and vegetation backdrops, so it is hard to judge how effective it is, but my gut feeling is that it should be at least as good as MultiCam and its variants usually are in most environments other than dark woodland or, of course, snow. Hopefully one day soon we’ll get a chance to photograph a wearer against different backdrops.

Probably the best way to present the thinking behind GEO7 Terrain pattern is to quote verbatim from company promotional literature aimed at buyers, so that is precisely what I will do.

Both 5.11 and VEIL Camo markings appear throughout the pattern [©BM]

GEO7 is a registered trademark.