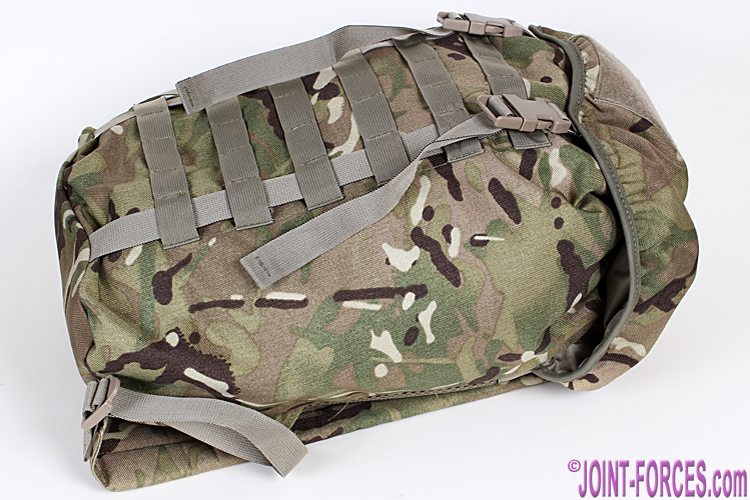 It is probably fair to say that, as a result of having reviewed quite a range of military kit over the last 20 or so years and being a bit of a magpie, I possibly have more daysacks and rucksacks to choose from than any of my lady friends have handbags. Even so, the nature of my work and the variety of assignments I undertake sometimes dictate that none are actually quite right for the job in hand and this is where the ability to add or remove pouches to modify a bag for the task in hand can be really useful.

For a recent 36-hour return trip from my home in Devon to Manchester, to cover the Outdoor Trade Show at its new (and excellent) home at EventCity, to keep costs down I opted to fly and use public transport and by choosing ‘hand luggage only’ the trip not only worked out cheaper than rail but I got there faster and with much less hassle than driving. The only downside was the 10kg total luggage weight restriction, but as I did not need to carry two cameras with a wide range of lenses on this trip (though I still had to take one camera, a back-up pint&shoot and a netbook plus a change of clothes) and I was not planning on bringing back an unduly heavy load of catalogues and samples, I reckoned I could get away with it by taking a very basic configuration, lightweight daysack.

Lightweight and basic are very apt terms for the MARAUDER Tactical Systems 20-litre capacity Patrol Pack, as it tips the scales at just 530 grammes (under 20 ounces) and frills have been kept to the absolute minimum but that is not to say that any corners have been cut as the bag is manufactured from UK MoD specification 1000D waterproof fabric in genuine MTP camouflage. The pack consists of a simple main compartment with elasticated hood-style top cover, under which there is a zipped pocket, with a drawstring neck weather baffle, padded shoulder straps, a padded mesh back panel, a 25mm emergency waistbelt, six rows of 5-slot PALS tapes on the front face, a pair of full depth 25mm compression straps for retaining the lid, a grab handle, and two pairs of 20mm strap female quick release clips to allow attachment to a bergen.

One thing you will not find on this rucksack are ‘organiser’ panels – which I find I seldom use – or unnecessary ‘added value’ features to try to persuade potential buyers that this daysack is somehow better or more ‘gucci’ than similar daysacks offered by competitors. This is pack meant to be a light and simple but functional load carriage item, and that is precisely what it is; that being said, I would have preferred it if the bottom three PALS tapes had extended around three sides, as I suspect there will be times I would like to use this daysack with utility pouches on one or both sides instead of on the front.

I actually bumped into Lesya from Extra-Range UK at OTS in Manchester and at first she did not realise it was one of her products on my back as I had modified it by tucking away the waistbelt (something I seldom, if ever, use on a daysack) and adding two pouches to the front. The lower pouch seen in the second photo was one from the MARAUDER range – their BN14 SAS/Para Bergen & Maxiload Front Pocket – inside which I carried a pack of several hundred JOINT-FORCES.com A5 flyers, and the smaller pouch is a Hexi Pouch from British Tactical which I use to stow my computer lead and charger plus USB mouse for easy access when travelling.

Without overfilling, this shaped patrol pack measures roughly 450x280x190cm externally which means it will fit inside even Flybe cabin baggage restrictions; these dimensions are, necessarily, a bit less than for many other airlines as this company uses narrow body turboprop airliners (mostly Dash 8) for the bulk of its short haul routes. For flying and to ensure compliance with the gauges, I removed my netbook (in its padded, zipped Intelligent Armour MultiCam travel case) and stowed it under the seat and detached the two external pouches and transported them under the Patrol Pack’s lid; incidentally, I stowed my toiletries in a clear plastic bag in the lid pocket where they were easy to access when going through airport security.

This comparatively cheap, light and simple daysack proved ideal for this specific trip and I suspect I may well use it for other short trips by plane and train where I need to keep down pack size and weight. Being just a simple bag it does not offer the same functionality as my usual multi-compartment camera/travel daysack, so it won’t replace this for most assignments, but I am sure I will use it a lot for other trips and indeed I have even used it already for the two-mile return stroll to my nearest major supermarket as I soon realised I could carry a lot of pies in one of these… I like pies!

At present Extra-Range UK have around a dozen bergens, packs and daysacks in their MARAUDER Tactical Systems range and they also produce a very wide range of load vests, pouches and accessories, mostly in genuine UK MoD specification MTP (Multi-Terrain Pattern) camouflage fabrics which are fully compatible with MultiCam and derivative patterns worn by many other armies. For more check out extra-range.co.uk but be aware that they do not sell direct to the public and you will need to buy through one of the specialist outlets who stock their products.