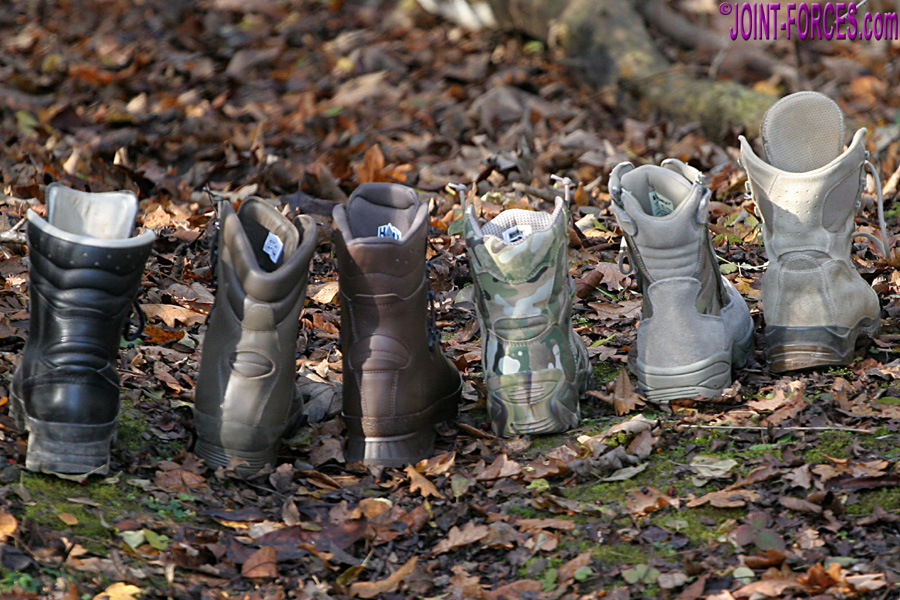 In June 2021 the UK MoD issued a Prior Information Notice advising of a potential 7-year requirement for the supply of new combat boots, writes Bob Morrison.

On 20th December 2009 the UK Ministry of Defence formally unveiled a new camouflage pattern for general issue combat uniforms, the first change in over four decades, and announced that what we now know as Multi-Terrain Pattern (MTP) would first be issued to 4 Mechanized Brigade troops deploying to Afghanistan in March 2010 and then be introduced across all three services from 2011. Around this time it became known in specialist circles that the Defence Clothing Team, at that time under their Chief of Staff Lieutenant Colonel Matthew Tresidder, was also working on introducing a range of brown combat boots to better complement the new uniform.

A few weeks after the DSEI 2011 defence expo, at which I was able to individually photograph brown combat boots displayed by some manufacturers, I decided to do a non-scientific observational experiment with Black (Lowa), Olive (Karrimor SF), Brown (HAIX), MultiCam (Magnum), Hybrid – Desert Tan & MultiCam (Viper) and Desert Tan (Meindl) boots to see how they fared against different backgrounds in varied lighting. To try to ensure the black boots were not parade ground shiny, thereby giving a false impression, I deliberately used an old and well worn pair but they still stood out in all shots.

Initially British troops in Afghanistan and other arid theatres who were issued with MTP combats continued to wear beige (aka desert tan) coloured desert boots, of which there were sufficient stocks available in most sizes to last for a couple of years, and as MTP was gradually introduced for soldiers serving at home and in temperate theatres the standard black boots continued to be worn to use up stocks. However although beige desert boots, originally introduced in the modern era in the build-up to the 1991 Gulf War One to be compatible with the two-colour stone and sand Desert DPM (Disruptive Pattern Material) camo, were also reasonably compatible with MTP, it was apparent that the standard black boots worn with 4-colour Temperate (Woodland) or Jungle DPM uniforms would stand out like bulldog testicles when worn in the field with MTP, so a decision was made to investigate more suitable boot colours.

Anyone who has closely observed MTP-clad troops in the field wearing black boots will have noticed that in circumstances where his or her camouflage blends in well with the terrain their feet, which generally represent about one ninth of the body mass, still tend to stand out even when the soldier is standing still as during daylight hours in the open air deep black seldom occurs in nature. Brown, on the other hand, is a much more natural colour block, though olive is probably a better, but the best mimetic and disruptive colour would of course be something closer to MTP itself.

The UK Defence Clothing Team did initially consider a more olive shade during trials, and our observations of this shade in the field suggest to us that it would have been near ideal, though boots manufactured completely from Crye MultiCam materials (the camouflage pattern from which UK MTP evolved) appear to work even better. However as ‘green’ is very much a non-standard colour and as shining up olive boots for the parade ground would be both problematic and look rather strange, in the end it was decided to opt for a more conventional reddish brown colour.

I will leave the reader to make up their own mind which boot colourway they think blends in best, but in 2011 I reckoned DE&S got it just about right when they opted for brown and ten years down the line my opinion has not changed. Several other NATO nations have now also replaced their black combat boots with brown.

PS: MultiCam combat boots, originally aimed at Special Forces users, did not really seem catch on with military users but for a while appeared to be quite popular with some of the Airsoft weekend warrior community and once US troops adopted Coyote Tan the lighter earlier Desert Tan shade became less poular.