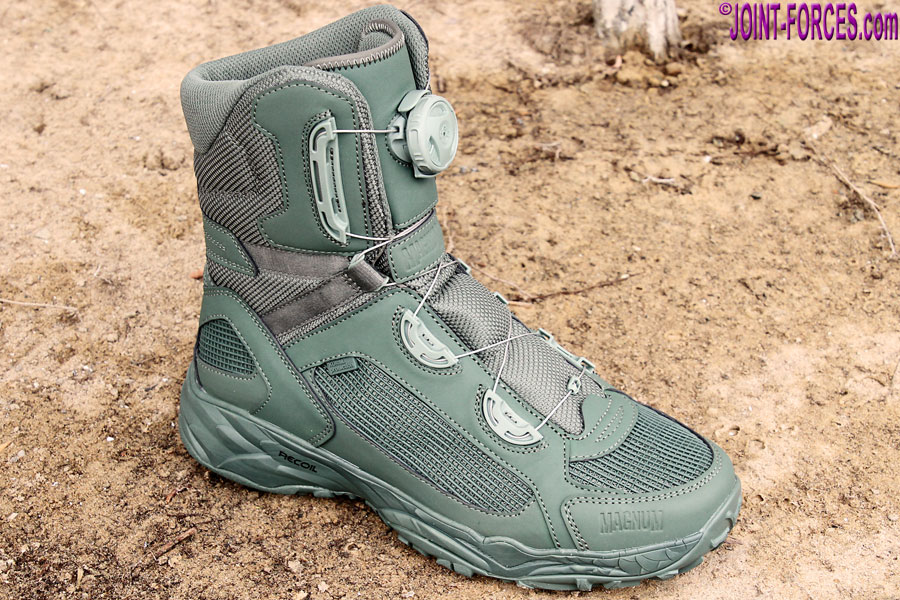 The OPUS Assault Tactical from Magnum was an ultra-light fabric, mesh and leather training and patrol boot [© BM]

We mostly concentrate in this section, possibly understandably, on conventional brown, black or tan military boots but, as many readers will be aware, these are not the only colours used by troops; indeed even MultiCam footwear is occasionally encountered in the field.

Display samples of the OPUS Assault Tactical model from MAGNUM, primarily conceived as a black training / patrol boot but produced in a variety of colours, were displayed at the 2017 IDEX expo in Abu Dhabi and the Sage Green version caught my eye. European military forces have been gradually moving away from black combat boots to brown over the last decade or so, but elsewhere in the world green boots are sometimes deemed more appropriate and particularly so where sage or light green are a primary colour in the uniform camouflage. The US Air Force, which is around four times the size of the British Army, also authorises the wearing of sage green boots with ‘Tiger Stripe’ ABU (recently phased out) and consequently many of the US military boot manufacturers produced Berry-compliant footwear models in this colour.

Ignoring the eye-catching colourway, which on this factory fresh display sample was possibly just a little too green, this particular OPUS Assault Tactical model from MAGNUM (no longer listed on their UK or Intl webstores) had a couple of very interesting other features, not least of which was the construction. According to the publicity material issued at the time, the uppers were constructed by heat pressing and bonding polyurethane with a substrate (in material technology, a covering that is applied to the surface of an object) material. We can confirm the resultant innovative high performance Kurim Protection upper was indeed super-lightweight; the manufacturer also claimed the breathable net mesh construction offered high abrasion resistance and had limited water retention. Magnum also stated that this innovative construction ensured the boot remained lightweight and flexible, while offering maximum uppers durability.

Regarding the sole, which had a very interesting tread pattern that I suspect would work well on smooth wet surfaces, such as paving and granolithic concrete, this incorporated proprietary Magnum RECOIL midsole technology for cushioning and good rebound plus the decoupled outsole heel was said to isolate the initial strike zone during walking to improve shock absorption. Of the outsole, which was made from durable carbon rubber, the company claimed the multi-directional lugs delivered superior traction, grip and support on slippery terrain. Unfortunately I never had an opportunity to wear these ultra-new boots in the field, so cannot verify the company claims, but OPUS Assault Tactical boots seem to have been quite popular with some security forces in the Mediterranean region.

To me, however, the most interesting thing about these boots displayed at IDEX 2017 was the use of the BOA closure system, which in recent years has become very popular on ski boots and the sports shoe market. This patented system, a little similar to the adjustment method on the UK Forces Battlskin Cobra helmet, which gives these soft construction boots a very close fit, uses a steel lace, nylon guides and a mechanical ratchet reel. My only concerns about BOA used in the footwear context are is it squaddie-proof and is it easy to fix in the field?