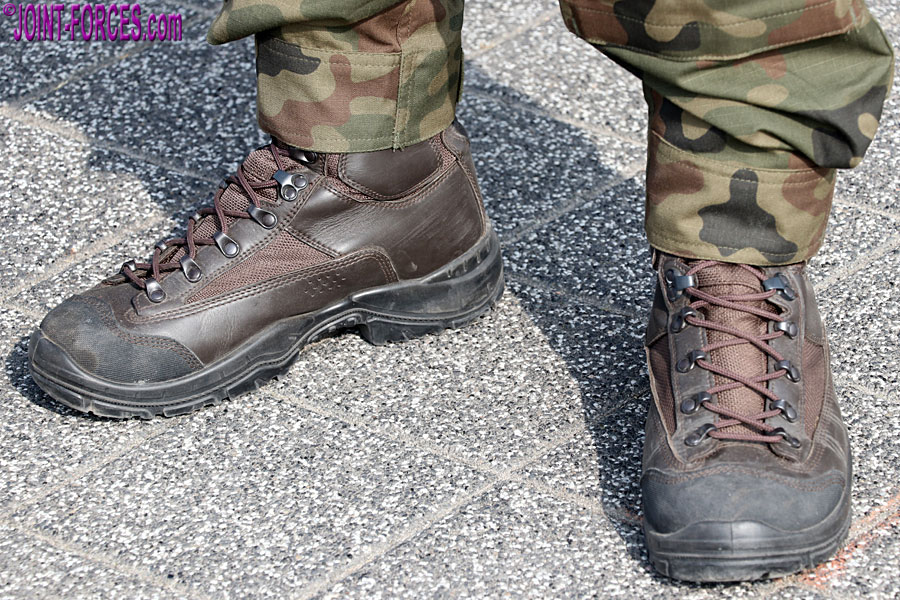 The Polish Army, with its new TRZEWIKI wz.939/MON Summer Boot, is the latest NATO ally to switch from black to brown for its combat footwear, writes Bob Morrison.

Over the last 25 years, since first visiting the training area at Drawsko Pomorskie (DPTA) for UHLAN EAGLE in 1996, I have worked with Polish troops at home and abroad a good many times so when there is a visible change in their personal kit I usually pick up on it. When I am photographing soldiers in the field, and especially so during often time-constrained organised media facilities, something I spot during the action will subconsciously trigger a red flag but it is not until I am back at my workstations perusing and cataloguing the shedload of photographs I have taken that the cause for this subliminal perception will become clear. In the case of the live-fire on DPTA with 17 Wielkopolska Brygada Zmechanizowana in August 2020, it was the use by some of the troops of brown rather than black combat boots which triggered my senses.

One month later, almost to the day, I was back out in Poland covering the MSPO 2020 defence and security expo at Kielce and while most of the (non-SF) Polish Army attendees were still wearing black combat boots, a number of personnel manning displays of the latest military vehicles and systems were wearing the new boots. However although virtually every branch and department of the Polish Armed Forces had exhibition stands inside the expo halls, as did a good many defence manufacturers, there were no examples of these new boots to be seen on any of the displays. As is often the case with issue footwear, when I asked soldiers and officers if the knew which company manufactured their new boots they were unable to help as to them these were “just the boots we are given”. This response is unsurprising as many armies don’t like manufacturers supplying kit which displays a prominent brand name.

Roll forward to MSPO 2021 this September and almost everyone (excepting Special Forces, who often do their own thing) was wearing the new brown summer boots. Again, however, there were no examples to be found on any of the display stands but this time the officers on the military rations team went out of their way to help me identify the makers, who are WOJAS S. A. of Novy Targ in the Podhale region of Southern Poland. WOJAS is a well-established Polish general footwear manufacturer which also supplies the armed forces and government departments, but it does not appear to sell these specific combat boots direct to the public.

As these boots, which according to labelling are designated TRZEWIKI (i.e. Ankle Boots) wz.939/MON, appear to only be produced for the military it has not been possible to source a specification sheet (Edit: see Update below). However it is obvious from the photos they have combination leather and textile uppers welded to a moulded composite rubber and polyurethane sole. There are leather ankle protection pads inside and out, the toebox has an additional outer layer of protection and the Achilles area has a vertical protective panel with padding. The lacing system consists of nine pairs of closed hooks, with a lace lock at the mid point, and there are ventilation holes in the instep. A waterproof membrane, believed to be OutDry rather than Gore-Tex, forms part of the construction.

Unfortunately we have not yet been able to source a pair of these Polish Summer Boots to test, but if WOJAS are reading this and are looking for more coverage please get in touch. With the British Armed Forces about to commence another five-year procurement phase for combat boots we are interested in reporting on the possible alternatives to some of the more familiar brands (not all of which might be put forward to MoD this time around).

One of our Polish readers, thanks AC, has kindly sent us a copy of the 2019 tender requirements which provided this guidance:-

General Description Of The Product [auto-translated]