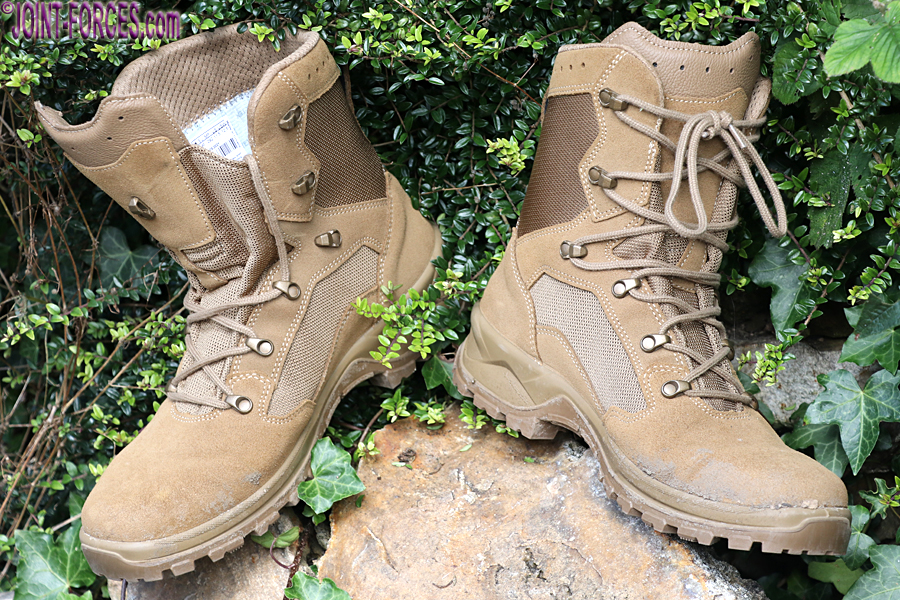 Deliberately positioned midway between the German boot company’s lightweight Black Eagle Athletic 2.0 desert boot and the heavier Scout 2.0 boot with stiffer Vibram sole unit, the new HAIX Combat GTX boot is designed for soldiers whose role sees them alternating between outdoor and indoor duties and I suspect would comfortably meet the requirements of the next British Army requirement in the Boots Patrol category if also made available in brown; a black version of the COMBAT GTX is also available for blue light emergency services users.

Over the last fortnight I have been wearing this new HAIX boot model pretty much constantly, interrupted only by a brief trip to Northern Ireland for ‘The Twelfth’ when I needed to wear black boots, and they have more than adequately coped with the typical English weather encountered during the Wimbledon season. Down here in rural East Devon the days have been warm, at times rising to the low to mid twenties, but during the first week of my initial test we also had to endure torrential downpours when the uninsulated Gore-Tex Extended Comfort three-ply waterproof membrane had to prove its worth a couple of times.

Designed to fit the standard 20cm height requirement demanded by most European military and police boot specifiers, the COMBAT GTX uppers use a combination of hydrophobic and breathable minimum 2.0mm thick supple suede leather and nylon fabric married to a combination rubber and polyurethane moulded sole unit that has a tread pattern designed for both street and rough terrain duties. In addition to the daytime temperature during my initial test period being warm and wet, thereby providing an opportunity to see if the in-built HAIX Climate System design and the Gore-Tex breathable waterproof membrane would keep my feet cool, the wet streets and muddy tracks gave an opportunity to check the non-slip and self-cleaning properties of the HAIX-designed tread; no issues on either score, and although the tread under the heel did clog up a bit (see photo) with rich Devon soil the crucial area under the ball of the foot repeatedly cleared itself remarkably fast.

The construction of this boot utilises the HAIX Climate System design, which uses a pumping action to circulate air with each step thereby drawing fresh air in through vent holes in the collar. Combined with the uninsulated Gore-Tex Extended Comfort membrane which, unlike this company’s original waterproof membrane, does not require a high temperature difference between inside and outside to work properly, this Climate System does seem to work very well and these days I seldom suffer much from smelly feet (though wearing socks with at least Merino wool content also helps here).

HAIX uniform boots have a reputation for being a little bit stiff in the uppers when first worn, something I discussed with the late and sadly missed company CEO Ewald Haimerl on a couple of occasions when he asked me for my frank opinions on his products, and the HAIX COMBAT GTX is no different in this respect. I reckon it took me a good week of the initial test period to start feeling really comfortable in these boots but now I am nearing the end of the second week they are feeling more like slippers. While the uppers did take a little bit of getting used to the anatomically-formed HAIX insoles and the HAIX Arch Support System, however, were really comfortable from the outset and as I have worn other similar construction boot models from this manufacturer I do not doubt that they will remain so for a long period of time before I need to consider swapping the insoles. Medically, I need to ensure I take good care of my feet and I have no worries on that score with this particular boot model.

My overall impression on the HAIX COMBAT GTX boot model is that it is a very good middle-of-the-range patrol boot which nicely fills the gap between the new generation trainer-like mid-height lightweight boots and the full-on Combat High Liability type of boot. As it does not have an insulated membrane lining it is probably more suited for spring to autumn wear outdoors, and best put back in the cupboard for winter, though for barracks-based deployments to warmer climes on rotations where a lot of heavy load-carrying is unlikely it should be okay for year-round wear.

The only minor grumble I have with this boot is the standard open upper hook lacing system, as opposed to the ‘speed lacing’ closed hook system used on some other HAIX models. However as open upper hooks are often a specific military and police procurement specification requirement, I understand why HAIX have gone down this route. The excellent HAIX mid-position D-ring lace lock has also been dropped, in favour of a nylon locking hook in position four of six, but as this performs the same basic function the boot still has two-zone lacing.

I suspect these HAIX boots will see a fair bit of wear over the next few months, until the thermometer inevitably drops again.