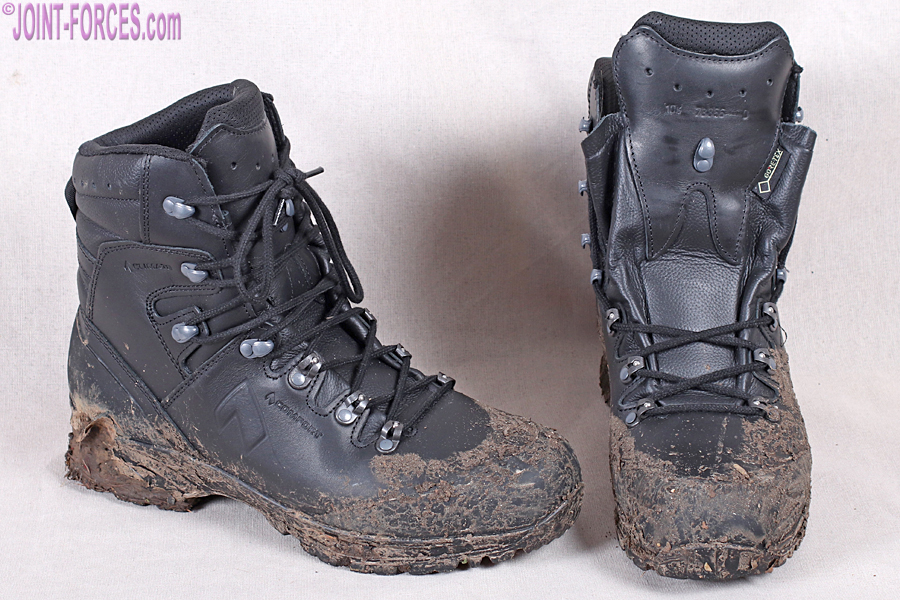 Over the last two weeks I have done my best to give these robust, insulated all-leather boots a decent initial wear trial and although COVID Lockdown has prevented me going on my travels with them to colder climes at least the UK winter conditions have been in my favour.

A conventional black police and military Cold Wet Weather boot, the HAIX Commander GTX uses high quality 2.5-2.7mm thick hydrophobic, breathable, waterproof leather throughout for its uppers and for comfort the boot a soft leather collar which is scalloped at the rear. The higher style of HAIX military and police boots have a reputation for being very stiff, which requires them to be broken in before prolonged use, and this new boot model is no different in that respect, though the new soft leather collar compensates to some extent without compromising the ankle stability and protection. Those used to wearing lightweight all-textile uppers patrol boots might struggle with the Commander at first, but in my opinion once used to these boots the benefits far outweigh any initial discomfort.

The GTX suffix, as is always the case with HAIX boot model names, denotes that a Gore-Tex breathable and waterproof membrane built-in ‘sock’ is part of the construction. In this case it is the abrasion-resistant Performance Comfort four-ply laminate (soft lining / moderate insulation / membrane / protective mesh knit) which is used for the inner sock; this Gore-Tex lining combination is identifiable by the darker grey diamond pattern fabric next to the foot. Use of the moderate insulation layer, as opposed to the thicker Insulated Comfort laminate used for dedicated Cold Wet Weather classification military boots, means this boot is suitable for year-round wear in temperate climates without the foot overheating unduly in summer. To cool the foot in warmer environments HAIX incorporate their Climate System, which uses pumping movement to permit air circulation with every step, releasing warmth and drawing fresh air in through the vent holes at the top of the boot.

A stout rubber and polyurethane combination Vibram outsole, identical to that found on the very popular HAIX Scout, is fitted to the new Commander GTX. One part of my daily exercise walking circuit has a currently very muddy and slippery slope section with leaf mulch on top, leading into and out of a stream, which in winter most walkers skirt around and take the footbridge instead but I have been just ploughing on through and these soles have gripped better than a very grippy thing – even with a dusting of snow on top. The January UK weather and the lack of opportunities to fly off on assignment to warmer climes mean I have not tried these boots over dusty rocks, but as I have not experienced any traction issues with my Scouts or with other boots using this Vibram sole pattern I don’t foresee any issues when things dry out.

The Commander GTX uses the HAIX Two Zone Lacing System, which allows separate adjustment for the boot both the foot and leg sections. However there is no HAIX locking D-ring at the mid point, just an open hook, and hooks are used at the three upper positions. My personal preference is for a closed lacing system, as per the company’s Scout or Nepal Pro models, but as the major end users who buy tens of thousands of pairs for issue usually dictate how they prefer a boot to be laced I understand why the company as opted for this layout. The bottom three lacing positions used closed ball-bearing ‘tunnels’ instead of plain fittings.

As is to be expected, the tongue gussets are near full-height to keep water and debris out and the leather tongue is padded at collar level for comfort. There is a rubber partial protective rand over the toecap area and the heel area also has a protective panel. The composite heels themselves are cushioned to reduce shock on the down-strike and/or if carrying a heavy load. Finally, the removable and washable moisture-wicking fabric and foam insoles are shaped and have a heel cup for foot positioning and cushioning.

Verdict? After a couple of weeks of near daily wear, now that my feet are well accustomed to these boots I really like them and I suspect I will now pension off my UK MoD HAIX Boots Combat High Liability (2012 spec) which I use for wet and muddy days on my exercise circuit when I am not off on assignment.