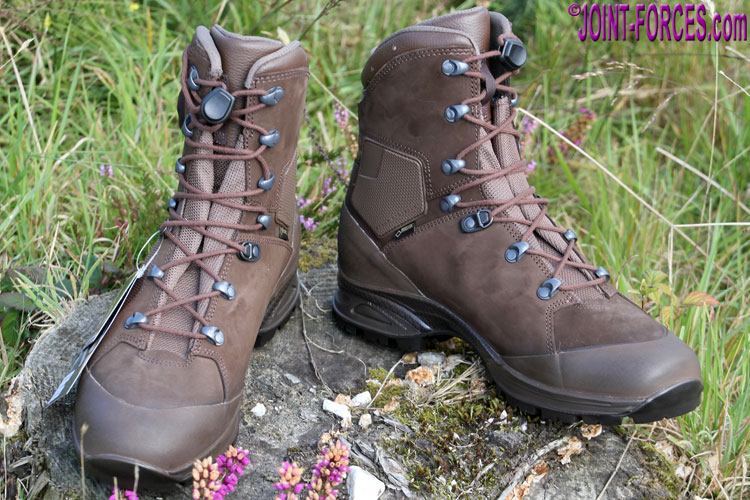 This feature on the HAIX Nepal PRO Light Service Boot was prompted by my noticing which boots Dutch Reservists providing security at Vlissingen were wearing, writes Bob Morrison.

If you take a look at the issued black combat boots which the Korps Nationale Reserve NCO in my recent Dutch Army M91 Disruptive Pattern Material Kit & Camo feature is wearing you might notice that they are very similar to the brown HAIX boot model which appeared for private purchase as the Nepal PRO in late 2015.

At the time of my visit to the Dutch port in mid-March, to cover operations linked to the now cancelled US Army DEFENDER-Europe 20 or DEF 20 deployment, I erroneously at first thought the brown and black HAIX boots were standard Nepal PRO examples and it was only when I later looked at the record photos I had taken that I realised they were all-leather boots rather than a combination of Nubuck leather and fabric. However, although the uppers are different both the basic construction and the details, such as lacing system and toe and ankle protection are identical.

Update, 23 March: Our friends at HAIX have informed us that the Dutch military boots, initial deliveries of which commenced last autumn, are officially designated Laars, Gevecht, Multi – i.e. Boots, Combat, Multi. Although they have much in common with the Nepal PRO, these all-leather boots were designed specifically to meet customer requirements. HAIX also supplied a large batch of combat socks to MinDef as part of the contract.

What we have come to know as the HAIX Nepal PRO first came to my attention in August 2014 when the French Army announced that a decision had been made over which model of Chaussures de Combat Centre Europe, or Combat Footwear for Central Europe, had been down-selected from the seven manufacturers who submitted tender bids. Incidentally, eight makes of Desert Boot were also submitted for a second contract but no bid was accepted at that time. Six years prior to this, in 2008, the French Army whipped up a little bit of controversy when they announced that the Brodequin de Marche à Jambière Attenantey (rough translation is Marching Boot Adjoining the Leg) or BMJA would be gradually phased out in favour of a more modern combat boot design. Many of the ‘old and bold’ of the French Army were aghast that the black ‘Ranger’ high leg boot, with its two rather cute side buckles, as worn by legions of French soldiers since World War II was going to be replaced by something more practical and less traditional. Between 2008 and 2014 small batches of black combat boots and tan desert boots were issued, mostly to troops on operations in cold or arid theatres, before procurement of the HAIX CdCCE was eventually announced.

France’s Armée de Terre opted for brown for its new Central European theatre boot and, no doubt much to the disgust of traditionalists, it did not go down the smooth leather route, meaning a highly polished finish was now impossible to achieve. But worse than this, in the eyes of some, it picked the German manufacturer HAIX (albeit through an Alsace-based subsidiary in Eckbolsheim, HAIX-France) to shoe its soldiers for temperate climates. HAIX sent me a pair of the Chaussures de Combat Centre Europe to try in late 2014 and after an initial wear test period, including late autumn assignments in both a warm Cyprus and a chilly Poland, I passed them over to my facilitator ‘Sniper John’ who subsequently raved about them.

Looking back at my initial comments I noted that the CdCCE has quite a high partial rubber rand to protect toe and heel from scuffing plus had HAIX’s ankle protection rubber pads on both the inside and outside of the foot. The lining was one of the then latest laminates from Gore-Tex, the three-ply Extended Comfort’ which is both durable and waterproof yet breathable, offering both climatic comfort and protection from chemicals and pathogens. The upper padding was memory foam for additional comfort, composition of the polyurethane heel and the sockliner gave cushioning and insulation, there was a nylon midsole for both foot stabilisation and protection from penetration by sharp objects, and the distinctive HAIX pattern non-slip and anti-static sole was by Vibram. For warmer climes, the standard insole could be replaced by a moulded mesh insole (supplied) to assist with ventilation and cooling. I noted at the time that these were “quality boots”.

A little under a year down the line HAIX sent me a pair of their commercial model Nepal PRO boot, which I immediately realised was none other than the brown French Chaussures de Combat Centre Europe model. Although the French CdCCE was procured following a cooperative process involving HAIX-France and the CESCOF (Centre d’Expertise de Soutien du Combattant et des Forces) organisation, plus STAT (Section Technique de l’Armée de Terre) and CEAM (Centre d’Expériences Aériennes de Mont-de-Marsan), the actual model of combat boot finally picked was one of the German company’s commercial designs. From official sources I was able to determine France originally ordered 180,000 pairs of the CdCCE in 2014 and once the first batch of 30,000 had been delivered, before 30th June according to CESCOF, the company then had sufficient capacity to manufacture stocks of what they call their Nepal PRO boot for other military customers and for private purchase. I have visited both of the HAIX manufacturing plants, the original German factory in Mainburg which mostly produces small specialist batches, and the massive Mala Subotica factory in Croatia which fulfils high volume contracts, and it is amazing to see just how fast they can produce thousands of pairs of footwear for major Government & Military clients.

Specification for the Nepal PRO, which these days is one of the standard HAIX Brown Military Boots range, is pretty much identical to that of the CdCCE: the uppers are 2.0 – 2.2 mm thick hydrophobic, breathable Nubuck leather with fabric panels; the abrasion-resistant lining is Gore-Tex Extended Comfort waterproof and highly breathable laminate; the dimensionally stable and moisture-absorbing plastic and fleece insole is puncture resistant; and the hard-wearing rubber / polyurethane oil-resistant composite sole has a multi-terrain self-cleaning tread. The boot features the HAIX Climate System with a Micro-Dry collar lining and the HAIX 2-Zone lacing system with the company’s D-ring locks at the 3rd position which allow, if desired, the foot to be tightly laced while the lower leg laces are kept less tight for comfort. Rather than tying the laces, there is is simple spring-loaded button lock at the top and the ends of the laces can be tucked away into a stretchy pouch on the outside of the leg above the ankle. There are protective ankle pads and a heavy duty rand protects the toe area.

Final opinion, for the moment at least, must come from ‘Sniper John’ who proffed the original CdCCE pair to beast them into the ground once my initial test was over and repeatedly sung their praises. We wear the same size of boots, as does his signaller son ‘Little John’, so there is always a good home for my footwear to go to. After a good couple of years my sniper mate told me he had finally broken those original boots and asked if I still had the part-worn Nepal PRO pair sitting on the shelves of my ceiling to floor ‘Imelda Marcos’ boot rack which he could have as replacements. He got his wish.