Home > Footwear > Combat Boot Archives ~ Something For The Ladies

Combat Boot Archives ~ Something For The Ladies 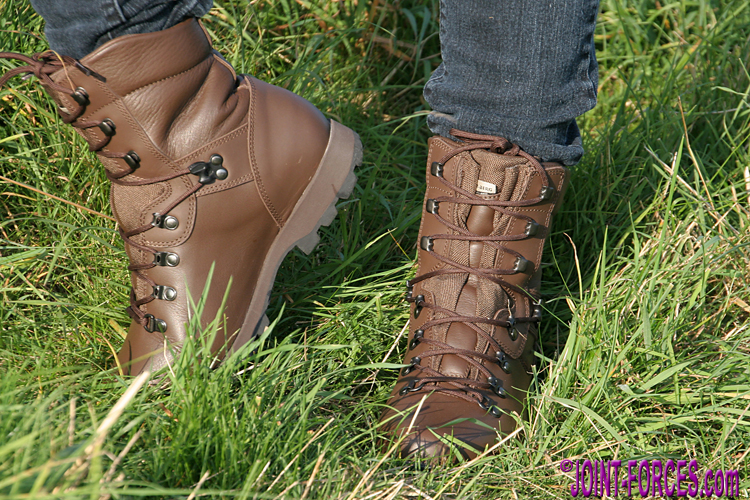 In early 2012 the news broke that ALTBERG had invested thousands in producing a new set of Ladies technical lasts formed specifically for the female foot shape and gait, writes Bob Morrison.

This revolutionary move allowed the North Yorkshire-based bootmakers to produce dedicated Ladies versions of their most popular black combat and desert boot types.

With the female soldier not only proportionally increasing in percentage representation across the board throughout the UK armed forces and uniform services, but also increasingly serving in frontline roles with the British Army, it really was imperative that their feet were catered for in the same way as those of their male colleagues. This following Footwear Archives article is a combination of two, slightly reworked, features first printed, a few months apart, in COMBAT & SURVIVAL Magazine in 2013.

By mid-2013 these new ALTBERG boots have been flying off the shelves like hot cakes at specialist retailers like John Bull of Catterick and Silvermans of Mile End, proving that ALTBERG founder Mike’s decision to produce ‘something for the ladies’ was a sound investment. At this time the British Army was well down the road to replacing black or tan boots with brown ones so Mike, whose company had been awarded one of the two UK MoD production contracts for brown Combat High Liability boots, decided to make three of his most popular models available in the new colourway to give the servicewoman even more choice.

The ALTBERG brown DEFENDER model was already by this stage on issue to British female military personnel on frontline deployment, as one of two boot options in the Combat High Liability category, but to further increase choice the company put its LADY SNEEKER AQUA ELITE and LADY DESERT ELITE brown boots into production and followed on shortly afterwards with the LADY SNEEKER MICROLITE ELITE model.

Mike’s son Joe, who now heads up the company, popped in to my office to show me the very first pairs of the latest two brown models to come off the production line and we proffed one of each to photograph them; the right hand boot in each pair being destined for the product catalogue photographer. As we only had ‘half sets’ of each we were not able to try them out, but based on my then Ad Director Moira’s glowing testimony for the black LADY SNEEKER boots she had been long term testing for the previous eighteen months or so, and my own fifteen plus year love affair with ALTBERG boots, we fully expected the latest additions to the range to be on the mark. However, just to be on the safe side, Jitka put in her order for one of the first pairs of brown LADY SNEEKER MICROLITE ELITE boots for field testing. For those unaware of specifications for these two established ALTBERG boot models, the SNEEKER AQUA ELITE is an all-leather full height waterproof combat boot with a breathable membrane lining which is intended for multi-terrain use and the DESERT ELITE is a full height lightweight suede and fabric arid theatre boot with ultra-breathable and fast-drying lining which is intended primarily desert terrain though it can also be worn in the Tropics. Both boots have full height tongue gussets to keep out water or sand, dependent on type of course, and they have different soles to best suit the type of ground they will primarily encounter; the SNEEKER AQUA has a DAVOS sole and the DESERT ELITE has a VIBRAM sole. Manufactured on the then new A-Forme medium ‘plus’ female foot shape lasts, with a narrower heel and broader front with increased toe roll, both Ladies boots are produced in half sizes from UK3 to UK9. The 1.8mm thick Nappone water repellent full grain leather boot has a Sympatex lining and Cambrelle is used to line the minimum 2.2mm thick suede leather boot, meaning no corners are cut on quality, and both boots use ALTBERG’s own design of contoured insole for comfort. Lacing on both models is a combination of D-ring anchor, three metal lace tunnels, a closed lace lock and three upper lace hooks on each side for speed and security. The collar of each boot is also well padded ALL the way round with soft leather for superb comfort.

We have all heard Napoleon’s old mantra about an army marching on its stomach, but if it is poorly shod that army will not march fast or far. Investing in a good pair of comfortable and hard-wearing boots is pretty much guaranteed to pay dividends in the long term, and I am sure that the many converts to ALTBERG footwear who I have bumped into in the field over the last fifteen or so years will back me up when I say that investing in boots produced by the Yorkshire-based family firm is money well spent. Now roll forward a little over three months to the late summer of 2013. The day after Joe S. personally dropped off the brown LADY SNEEKER MICROLITE ELITE boots and checked them for fit, Jitka and I went out for a hike through the Lincolnshire and Nottinghamshire border countryside to capture some specific images for which we needed a blue sky backdrop. Jitka wore her new boots as she was really keen to try them out and her verdict at the end of the day was: “These boots walk by themselves!”

“These boots walk by themselves!” said Jitka, talking about her Sneeker Microlite Elite boots [© BM]

When I questioned Her Ladyship precisely what she meant (English is not her first language – it’s her fifth) she explained that they were so light on her feet and gave such positive grip over different surfaces that she felt they were doing the walking and she was just following them. Having worn SNEEKERS myself, I realised just what she meant.

To check the current range of Ladies model combat and tabbing boots from this popular manufacturer, which next year will celebrate its 30th Birthday, go to altberg.co.uk