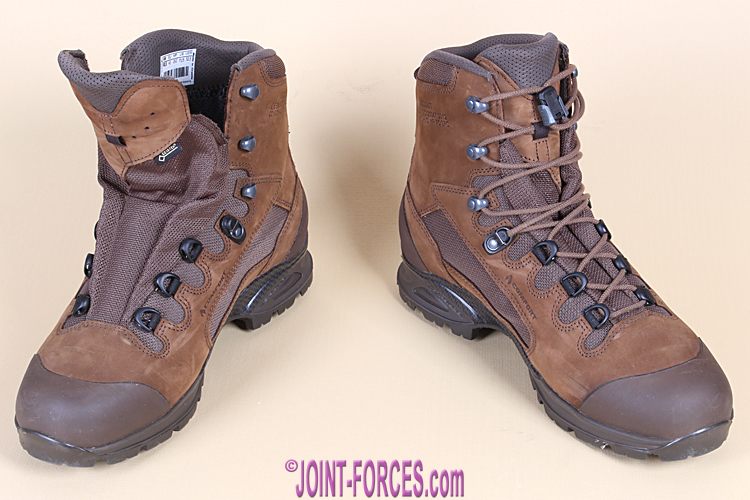 The latest footwear we are looking at, as requested by NCO friends at The Curragh, is the HAIX SCOUT  Nubuck leather and textile upper Gore-Tex combat boot, writes Bob Morrison.

This sturdy combat boot, which has been procured by at least a couple of nations to equip some of their troops currently operationally deployed in theatres where persistent heavy rain and snow are unlikely to be encountered but a waterproof boot capable of keeping out pathogens is desirable, is higher than a mid-height boot like the HAIX Black Eagle but lower than the 2012 spec UK HAIX Combat High Liability model or the more recent French HAIX Central European (i.e. Nepal Pro) combat boot. There is a very good reason for many of the recently specified combat boots being lower than in the past, but that is a topic for another day.

I am no stranger to HAIX military boots, having wear tested many different models over the last decade or so as well as having visited both their Mainburg (Bavaria) and Mala Subotica (Croatia) factories, so I have really only needed to do a week or so of wear testing just to check for fit and functionality. There are some minor detail differences on the SCOUT, but construction and material standards can be taken as a given as company CEO and founder’s son Ewald Haimerl insists on maintaining consistently high quality control throughout the HAIX organisation; I can vouch for this having seen it for myself during two factory visits where I spotted UK MoD boot orders being fulfilled.

The SCOUT, as you may have noticed, is not a UK MoD Brown colourway boot but is midway between brown and coyote tan. Most of the photos on this page were photographed under the same studio lighting conditions I try to use for this Footwear section of the website, but I have included one photo shot outdoors on a very bright overcast summers day, during the wear trial at the start of August which possibly gives a better idea of how they look to the naked eye.

Intended as an all seasons boot, the SCOUT employs the Gore-Tex Extended Comfort breathable laminate lining to help keep the foot dry as well as the HAIX Climate System to keep it cool. This works by releasing warm air through the Micro-Dry lining at the collar by using the pumping movement caused by every step to generate air circulation through the internal construction of the boot.

The leather used for the uppers is 1.9–2.1 mm thick hydrophobic and breathable Nubuk, with each hide being measured for thickness in the factory before components are cut. Those uppers side panels which are not leather, plus the bellows tongue and the collar, are fashioned from a durable water-resistant and abrasion-resistant textile. Both toe and heel areas are protected by a substantial rubber rand.

The SCOUT composite rubber and polyurethane outsole, the same proven one used on the Nepal Pro, is manufactured by VIBRAM and intended for both road and off-road use, offering a combination of high wear resistance and good non-slip traction; like most soles used on HAIX combat and patrol boots, this one is very quiet over hard surfaces. It is also oil, petrol and heat resistant and is compliant with EN ISO 20347:2012, as required these days by many combat boot purchaser specifiers. The heel section is also shock-absorbing.

The substantial footbed is anatomically formed and padded [© BM]

As for the footbed supplied as standard with this boot, it is much more than just a basic insole. Anatomically formed and consisting of a heel and instep cup bonded to a thick shaped foam layer with fabric top layer, it is both replaceable and washable (at 30C). Its construction offer good moisture absorption and the materials used mean if dries out very quickly; this is the sort of footbed one might expect to pay £20 or more for from an after-market supplier but replacements are cheaply available direct through HAIX.co.uk

Finally, the lacing. The HAIX Two Zone Lacing System, which uses their own locking D-ring design at the mid (fourth) eyelet position, allows for separate adjustment of the boot in both the foot and leg area; I really like this system, also used on UK MoD 2012 spec HAIX combat boots, which ensures the boot is really secure on the foot. The company’s Smart Lacing method, as the company claims, ensures smooth and non-pressure adjustment of the boot to the foot and the SCOUT also has the quick lock and side lace pocket design; I was a bit unsure about this feature when I originally encountered it but after using it consistently for a good couple of years I’m a convert. Incidentally, the lower three pairs of plastic lace ‘tunnels’ are of a design I have not come across before – they work very well.

Final verdict? Like other full specification combat boot models from HAIX which I have tried out over the years I found the SCOUT to be a little bit stiff around the collar the first two or three times I wore them, so I would suggest they may need a little breaking in, but now that the honeymoon is over they have become very comfortable indeed. Both ‘Sniper John’ and ‘The Colonel’ are sniffing around for pairs of brown boots for long term beasting, but I suspect it won’t be these ones as I reckon they could be ‘keepers’. Sorry guys.

To check sizes – they go up to UK 15 / EU 51 – and specifications or to buy the SCOUT online click this link. A Ladies version is also produced.

Update: In response to questions about the weight of this boot, although it uses a Gore-Tex Comfort membrane lining like some of the new generation of ultra-lightweigh mid-cut boots the SCOUT is a ‘proper’ combat boot constructed to last a full tour and tips the scales at around 845g for a UK 10.5/EU45.

Combat Boots, Featured, HAIX, SCOUT
You may also like