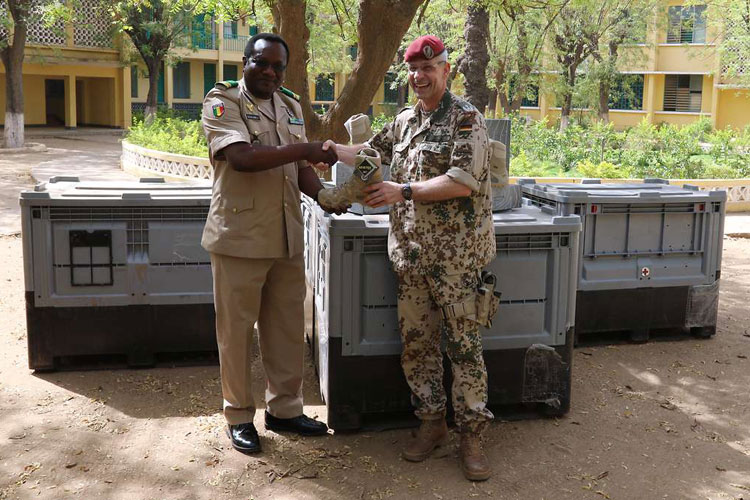 The German Federal Ministry of Defence,  Bundesministerium der Verteidigung, has announced the gifting of 300 pairs of combat boots to the Malian Army.

In the press statement the Ministry says: “Service in hot, dry countries places different demands on the equipment of the troops than in Central Europe. Therefore, German soldiers receive special clothing for these climate zones for their missions in Afghanistan, Iraq or Mali.

“Their feet, especially, become very hot. Combat boots are designed to protect the feet and ankles, but are not as airy as one sometimes wishes. Therefore, the German soldiers receive special models for hot climates. These allow a more pleasant foot climate and thus prevent diseases caused by constant wetness in the boots.

“The Malian forces are still a long way from such specialised equipment. Many soldiers only have one pair of boots that, if they are lucky, also fit. Therefore, Germany is involved in retrofitting projects for new equipment of the Malian troops. Already in the past new backpacks and Camelbaks have been handed over, meaning a considerable gain for the Malian Army.

“Now, through the German contingent leader EUTM Mali, Lieutenant Colonel Gottsche, 117 pairs of desert boots have been handed over to Lieutenant Colonel Kone, the commander of the Malian officer’s school in Koulikoro. Another 183 pairs will follow in a later delivery. The total of 300 pairs of boots have a value of around €48,000 and directly benefit the Malian soldiers.

“The joy and gratitude of the school commanding officer over the new equipment were great and the Malian officer thanked Lieutenant Colonel Gottsche very warmly in the name of all his soldiers. With such small but important projects outside the EUTM mission, Germany helps the Malian military build and improve its capabilities. It will not be the last.”

Footnote: The boots provided appear to be LOWA Zephyr GTX Hi Desert 7-eyelet model, which is a very lightweight patrol boot with a Gore-Tex extended comfort lining. I have a pair of these LOWA Zephyr boots in the mid height cut, with one less pair of eyelets, and have found them to be very comfortable in warm climates.