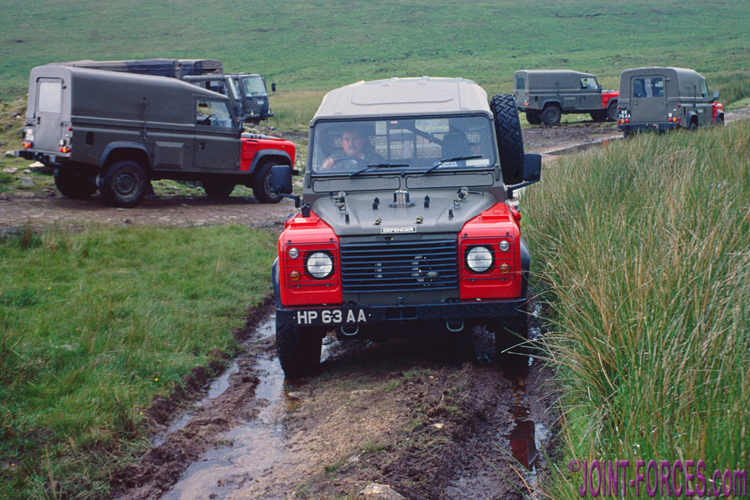 This article was prompted by a question at the recent War & Peace Revival about what differentiates the WOLF from other military Defenders used by UK Forces, writes Bob Morrison.

I have been writing about, and photographing, military Land Rovers for over thirty years and much of my accumulated subject knowledge is filed away in dark corners of my brain waiting to be dusted off whenever I need to answer questions from enthusiasts or pen another article. Sometimes I forget that not everybody who has an interest in my specialist topic has necessarily been around the scene as long as I have, nor read my many magazine scribbles and books on the subject, so consequently some things which I take for granted can be a bit of a mystery to them.

The enthusiast I was chatting to at Beltring was probably watching Blue Peter back in the early 1990s when what we now know as the WOLF Land Rover was developed in a protracted process which commenced with an Invitation To Tender being published in January 1992 and ended with an order for just under 8,000 vehicles being placed in January 1996. As at that time the British Army was not only running a fleet of military specification Ninety and One-Ten Land Rovers procured in the mid-1980s, plus a legacy fleet of leaf-sprung predecessors, but had also placed a number of smaller interim orders for early 1990s Defender 110 models, and as from 1991 Year Model onwards all military and civilian spec Land Rovers were badged as DEFENDER, it is possibly unsurprising that some presume all coil sprung Land Rovers to be the latter.

So why, one might ask, if it already had over 10,000 DEFENDER and pre-DEFENDER Land Rovers already in service or on order in the early 1990s did the UK MoD start a new trials process rather than just placing a repeat order? The answer to this is three-fold:

Tender invitations were sent out to 19 interested parties, mostly European manufacturers or UK-based suppliers though AM General from the USA was also on the list, but in the end only Land Rover was able to propose vehicles for trials which met the specification; some makes of vehicle could not meet payload requirements and others could not fit the dimensional envelope which was dictated by air and maritime transportation requirements. As a result, Land Rover ended up with nothing to compete against except an unachievable 100% target.

One month after the list of 19 companies interested in Tender LV2a/088 for the TRUCK UTILITY LIGHT and TRUCK UTILITY MEDIUM (TUL/TUM) requirements was published, the list of 22 companies interested in Tender LV2b/179 for the supply of ALL WHEEL DRIVE AMBULANCES was also published. Unlike TUL/TUM, three manufacturers – IVECO, Land Rover and Steyr-Daimler-Puch – were able to meet specification requirements and proper competitive trials were run in this category too (I will come back to this topic in the future).

In May 1993 the TUL/TUM trials commenced with Land Rover supplying slightly modified and militarised Defender 90 and Defender 110 models powered by the new 300 Tdi inter-cooled turbo-diesel engine, which met the latest EU emissions requirements. To cut a long story short, these prototypes failed to meet the new Battlefield Mission requirements and within four months the trials were suspended and Land Rover’s engineers were sent back to the drawing board.

At this time Land Rover, as part of Rover Group owned by British Aerospace, was designing the 2nd Generation Range Rover (P38A model) using the very latest Computer Aided Design technology – the P38A was the first automobile completely designed with CAD – and the company’s military engineering department was able to use existing programmes to speedily redesign aspects of TUL/TUM which did not meet trials requirements. Primary changes introduced included strengthening of the chassis, upgrading of axles and axle casings, uprating of suspension and strengthening of the body and canopy frame to provide greater rollover protection.

The revised trials vehicles, usually referred to as WOLF 2 to differentiate from the earlier WOLF 1 prototypes, recommenced the Battlefield Day trials programme within the allowable 12 months after suspension and by May 1995 they had successfully passed all benchmarks. The official UK MoD announcement of the award of the production contract (Press Release 013/96) was published on 18th January 1996 shortly after the Minister of Defence, James Arbuthnot, told Parliament:-
“There is a pressing need to replace about half the current fleet of Land Rover utility vehicles, many of which have reached the end of their operational lives. Subject to the satisfactory completion of contractual negotiations, we propose to place an order with Land Rover for about 8,000 new vehicles, known commercially as ‘Defender XD’, to meet the Army’s light and medium utility truck requirement… the new Land Rover vehicles will enter service this summer and will be available for operational deployment in support of IFOR.”

WOLF was Land Rover’s in-house project name for the LV2a/088 contract model – their Battlefield Ambulance LV2b/179 contender was codenamed PULSE – but formally the model was called the Defender XD (eXtra Duty) to differentiate it from the earlier military versions. The Ministry of Defence designated the new fleet as TUL HS or TUM HS, dependent on wheelbase, with the HS standing for Higher Specification. Both soft top and hard top WOLF models on both the 90 and 110 wheelbases were produced for the UK military and a small follow-on batch was produced for the Royal Netherlands Marine Corps units tasked to the joint UK-NL Amphibious Force.

The accompanying images, with the exception of the two of the WOLF 1 prototype, are all of long wheelbase (Defender 110 HS) hard tops. I will no doubt cover soft top and short wheelbase models in future articles. 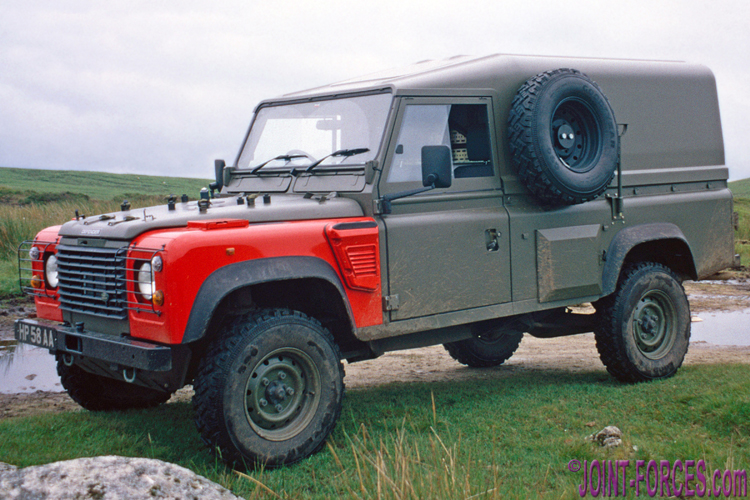 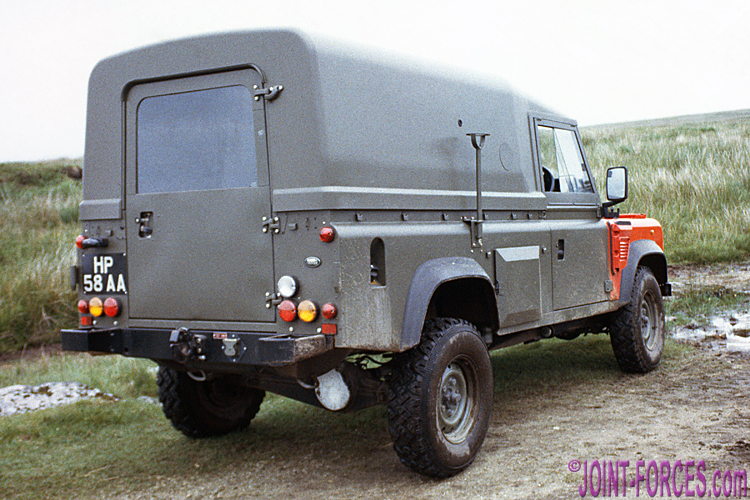 HP58AA from the opposite side – in addition to a 560-mile round trip each week, mostly on motorways, these User Trials vehicles spent Monday to Friday off-road [© BM] 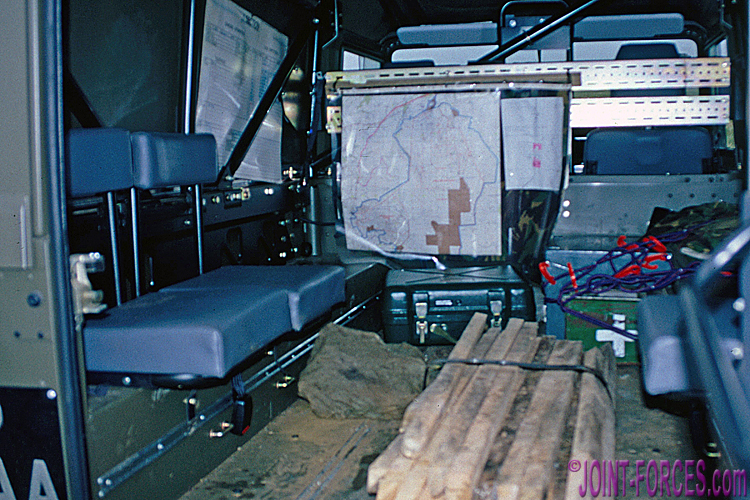 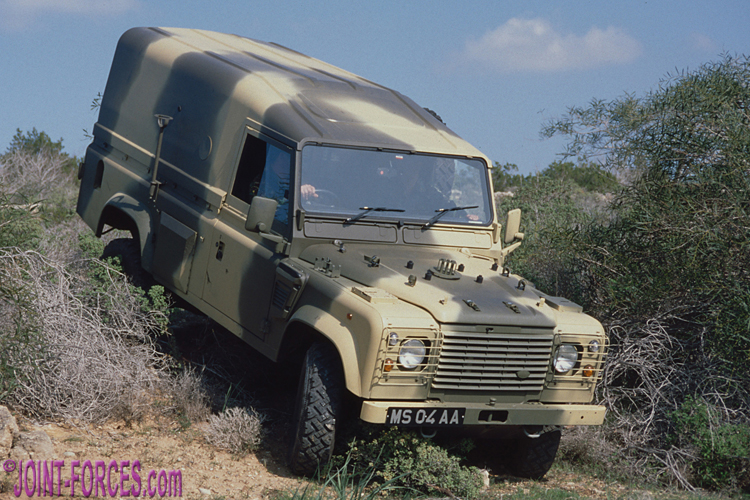 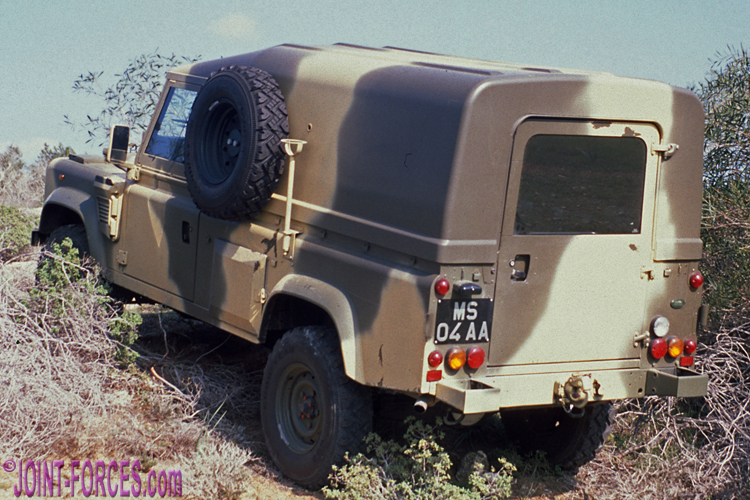 As part of the deal Land Rover offered 5-year Warranty support but this meant only easy to remove water-based camo paint could be used on the NATO Green vehicles during this period, hence the impefect paint job [© BM]