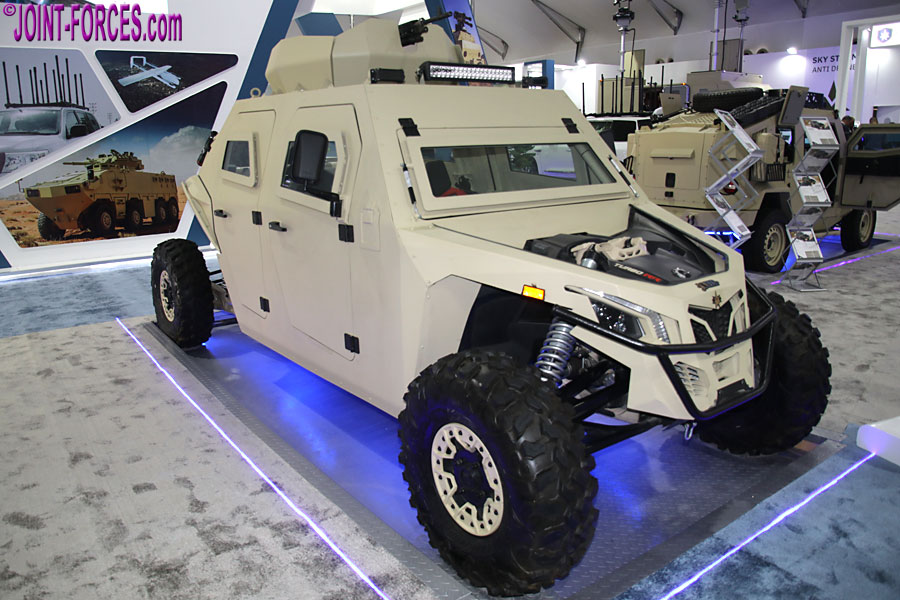 The JODDB Al-Barq (Lightning) Armoured Tactical Vehicle is one of a number of new Jordanian light vehicles which were displayed at SOFEX 2022, reports Bob Morrison.

The Al-Barq (Lightning) is, according to JODDB, a high mobility off-road armoured tactical vehicle designed for fast response, border patrol, reconnaissance and Special Operations. Based around a Can-Am BRP side-by-site ATV or All-Terrain Vehicle, which I suspect to be the Maverick X3 X RS Turbo RR, the Al-Barq offers demountable frontal and side light armour protection to B4 (NIJ 3A) level; i.e. it is rated against 9mm, .38 Special, .357 Magnum and .44 Magnum rounds.

Crewed by three, the 1750kg GVW armoured buggy is powered by an Austrian 900cc 3-cylinder ROTAX ACE Turbo RR engine developing 195hp through a QRS-X CVT transmission with High, Low and Reverse gearing. There are three doors and three racing-type seats plus a back rest for the top cover gunner, who has a shielded 7.62mm machine gun and stowage for 400 rounds.

Jordanian Special Operations have a long tradition of using 4×4 light strike vehicles to patrol remote desert areas ~ both neighbouring Syria to the north and Iraq to the north-east, with which it shares porous borders, have been strife-torn for many years ~ and the Al-Barq looks like it could not only be a suitable replacement for the Jordanian Chenowth ALSV fleet, which entered service in the early years of the 21st Century, but also give the crew a degree of ballistic protection not offered by the ALSV.

¤ In my next brief article on JODDB vehicles I plan to look at the prototype Al-Hajras.