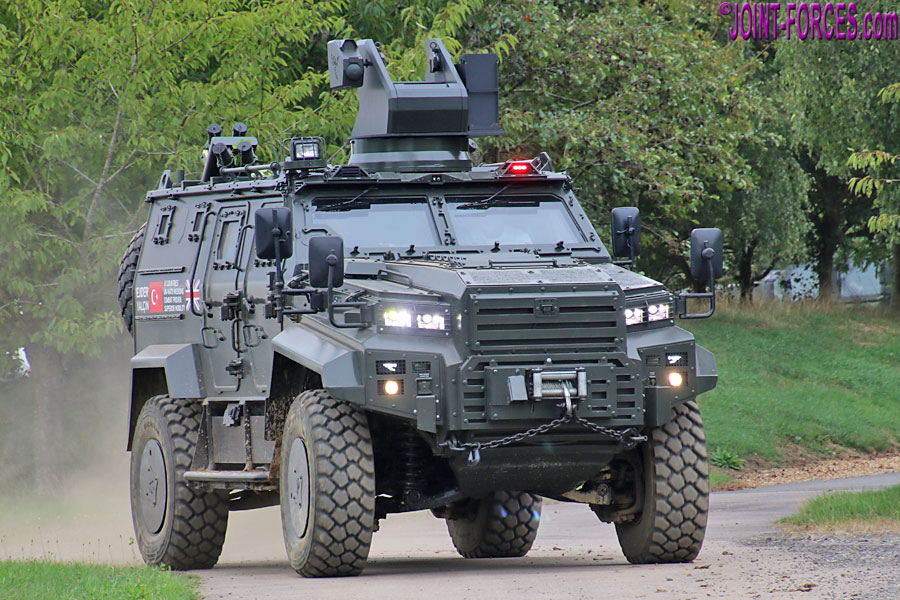 The Ejder Yalçın 4×4 ACV from Nurol Makina of Ankara, there is also an Ejder 6×6 version used by Georgia, is currently in use or ordered by at least ten nations in addition to being in Turkish service but I believe the recent DVD (Defence Vehicle Dynamics) 2022 expo at Millbrook was its first public outing in the UK.

Normally configured to seat nine, in two + three + four configuration with the rear four passengers facing inwards, though as many as eleven or as few as two can be carried in some specialist variants, the Ejder Yalçın (which roughly translates as Rugged Dragon) 4×4 version has a GVW between 12 and 14 tonnes and payload of up to 4 tonnes. Powered by a 300hp Cummins diesel engine which gives it a top speed of 110km/h, through an automatic gearbox, the vehicle measures 5420 x 2485 x 2300mm (to top of hull) and has a 3100mm wheelbase. According to manufacturer’s data it has 400mm ground clearance, can climb a 500mm step, cross an 1100mm trench, ford 1100mm unprepared and tackle a 70% gradient or 30% side slope. Various crewed and remote weapons systems can be fitted and a dozen different variants are shown in company literature in addition to the standard ACV version as displayed at DVD 2022.

Designed around 2012/3 specifically for Turkish Armed Forces counter-insurgency operations (they are believed to have several hundred in service) the vehicle’s V-shaped hull with floating floor plates and blast suppressed seats offers a high degree of mine protection coupled with a high level of ballistic protection, which can be further improved with the addition of both appliqué and cage armour packages. Other countries who use, or have ordered, the Ejder Yalçın include: Burkina Faso, Chad, Hungary, Niger, Malaysia, Senegal, Tunisia, Turkey, Qatar and Uzbekistan.

With rumours that the UK MoD may be backing off from its 2016/7 plans to purchase 2,747 of Oshkosh JLTV (Joint Light Tactical Vehicle) for the British Army to meet MRV-P (Multi Role Vehicle – Protected) Package 1 requirements, approved as a potential $1.035 billion Foreign Military Sale by the US DCA on 10 July 2017, and with the Ejder Yalçın being a comparatively inexpensive vehicle with proven operational track record, this one might be worth keeping a close eye on. The 2011 MRV-P procurement programme, which was essentially the re-scoped / reinvented 2003 OUVS (Operational Utility Vehicle System) requirement, was intended to source both troop / logistic carrier variants and a battlefield ambulance; all protected against threats in excess of STANAG Level 2.