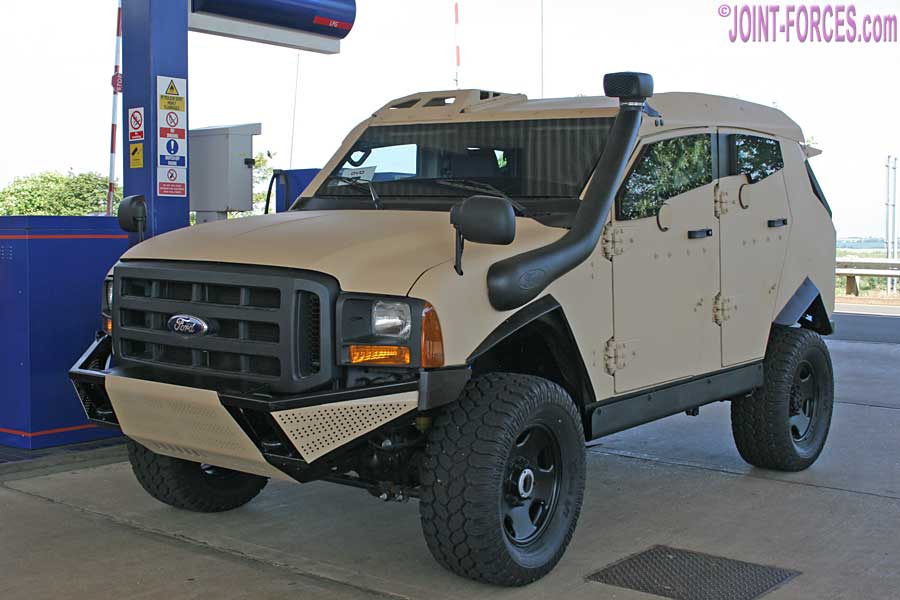 While searching my archives for photos of the Plasan / Oshkosh SandCat for the Bulgarian MP feature I unearthed some unique library images, writes Bob Morrison.

In some ways the SandCat, originally designed by Plasan Sasa of Israel and mostly though not exclusively bulk manufactured for foreign sales by Oshkosh in the United States, is a little bit like Grandfather’s Axe or Trigger’s Broom. The basic concept and design has not altered very much since its inception around 2005, but so many modifications and alterations have been made that even although the latest version displayed at Eurosatory 2022 is still fairly recognisable as being a SandCat it is a totally new vehicle.

It is quite probable that I saw the Ford-badged Plasan Sasa SandCat, originally called the Caracal but rebranded to avoid any confusion with a European vehicle, at Eurosatory 2006 during my brief two-day visit to Villepinte but although I took 280 photos of mostly new vehicles and kit which caught my attention there are none of the Israeli vehicle. Two weeks later, however, the same demonstrator turned up at DVD (Defence Vehicle Dynamics) 2006 at Millbrook Proving Ground and when I spotted it having its tank topped up at the on-site filling station just before the expo officially opened I was so intrigued that I persuaded the driver to allow me to photograph it against a natural background before it was parked on the Plasan stand.

Seen from the front, it seemed obvious that the Caracal / SandCat was based on a shortened wheelbase Ford F-350 pick-up truck (known as the King Ranch in North America) chassis as the grille, bonnet / hood and front wings were standard items. However the angular bumper below the front grille, the angular wheel arches, and the trapezoid armoured side windows (designed to give maximum visibility for occupants while reducing the weight of laminated glass in the doors) all contributed to making this light armoured vehicle look very futuristic. As for the armour used, Plasan have always been very cagey about discussing this other than to say they use a high performance composite and assembly is bolted rather than welded.

Roll forward to DVD 2009 and Oshkosh were displaying two SandCats at Millbrook in the form of an 8-seat Transport version and a prototype open-topped SOV (Special Operations Vehicle) variant. The hard topped vehicle, which was based on a shortened Ford F-550 Super Duty chassis, had a distinctive redesigned front grille (often described as being feline in appearance) and vertical armoured side wings to protect the engine compartment, but it was still recognisably a SandCat (though lest there be any doubt, the name was laser cut out of the rear chassis crossmember). Most 8-seat Generation 2 SandCats, including the recently covered Bulgarian MP vehicles, are very similar to this 2009 demonstrator, which Oshkosh were pitching at a British Army requirement for a highly protected alternative to the ageing Courtaulds CAV-100 Composite Armour Vehicle, aka Snatch Land Rover, procured as a lightly protected Public Order Vehicle which was subsequently grossly over-matched by the threats in Afghanistan and Iraq. (The all-new Force Protection OCELOT, aka FOXHOUND, was eventually selected).

Around this time there was also a UK MoD potential requirement for a lightly protected open-topped Special Operations Vehicle, and the SandCat SOV displayed at DVD 2009 was presumed to be intended to meet this. The SOV had an F-Series bonnet/hood and wings etc. with a similar ‘feline’ front grille and a very similar lower front end to the prototype SandCat seen at DVD 2006, but the open crew cab was protected with composite armour doors and panels. However as the in-service Supacat HMT / JACKAL was subsequently modified with and armoured floor pan and composite armoured side panels the SandCat SOV concept is believed to have gone no further.

By DVD 2010 (it was an annual show back then) Oshkosh and Plasan had designed the SandCat M-LPV (Mine-Protected Light Patrol Vehicle) and an example, tailored towards the Snatch Land Rover replacement requirement, was presented at the event. Much higher than the Generation 2 SandCat as a V-shaped hull to better protect against mine and IED blasts was incorporated, it still retained the general looks of the mainstream vehicle. Purely by chance, I managed to snap both an M-LPV and a Gen 2 Transport SandCat variant in the same frame out on the off-road course and although not a brilliant photo it shows just how similar yet different the two types were. Like the SandCat SOV, the SandCat M-LPV did not enter British Army service.

At DVD 2010 Oshkosh also displayed their new M-ATV or MRAP (Mine-Resistant Ambush Protected) All Terrain Vehicle. Aimed at a specific late 2008 US DoD requirement, which attracted six vehicles makes of which the Oshkosh M-ATV was successful, this was a much heavier (around 15 tonnes GVW) and much higher protection level type of vehicle than the SandCat. Also using bolted Plasan composite armour in its construction, the M-ATV has similarities with the SandCat but is over twice as heavy. The lighter Oshkosh JLTV (Joint Light Tactical Vehicle) is closely related to the M-ATV. I also managed to snap a M-ATV alongside a SandCat M-LPV for comparison at DVD 2010.

Other than Bulgaria, the only other European NATO nation I am aware of which uses the SandCat in military (as opposed to civil police) service is Poland. Their vehicles, known as the Szop or Raccoon, are used by the Military Gendarmerie (Żandarmeria Wojskowa) and are of the Generation 3 type. Four different versions ~ Rapid Intervention, Command, Ambulance, and VIP Evacuation ~ were ordered in 2015. I was able to snap one of the ambulance variants at MSPO 2020 in Kielce.

Finally, at Eurosatory 2022 Plasan unveiled the latest version of the SandCat Storm-Rider, a vehicle first revealed in 2016, but that is probably a story for another day.

Update: Plasan’s Design Director has informed us: “Actually the StormRider that we showed at Eurostatory recently isn’t the latest design, it’s the earlier version. We didn’t have an example of the new design (pictured below) to display as they’re all customer vehicles right now“.