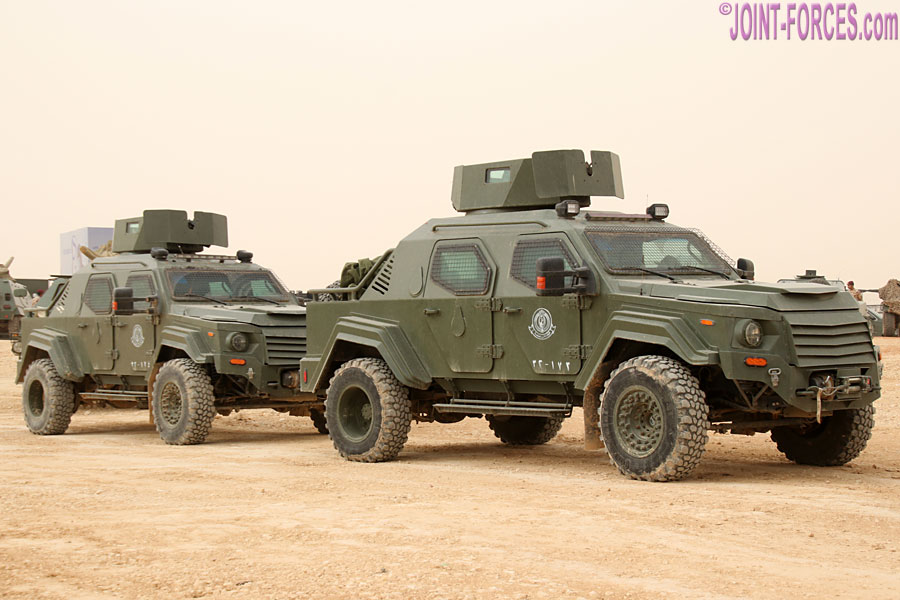 In service predominantly with Canadian, Mexican and United States Police SWAT-type (Special Weapons and Tactics) and Counter-Terrorist units, the Ontario-produced Terradyne Gurkha is also deployed by Saudi Arabia’s SSF (Special Security Forces) and neighbouring Bahrain’s CTB (Counter-Terrorism Battalion) plus the Singapore Police Gurkha Contingent. At the recent World Defence Show (WDS 2022) in Saudi Arabia I was able to photograph Gurkha RPVs in action with the Saudi SSF and on static display outside the exhibition halls.

Three variants of the Gurkha, four if a civilian market version is included, are produced by Terradyne Armoured Vehicle Inc. using the Ford Super Duty F-550 model chassis cab as the base. The variant used by the Saudi SSF is the four-door RPV or Rapid Patrol Vehicle, with seating for five plus an open rear cargo area, but five-door LAPV or Light Armoured Patrol Vehicle and MPV or Multi-Purpose Vehicle variants with rear compartments for up to six more personnel are also in service with other customers. All three share the same wheelbase and are 2455mm wide, but dependent on version the height over roof varies between 2500mm and 2645mm and the overall length varies between around 6120mm and 6360mm. Kerb weight for the RPV is listed as being fractionally over 7,000kg which gives a working payload of around 1,800kg. According to the manufacturer, ballistic protection level for the Gurkha is STANAG 2 / B7.

As far as I can determine these vehicles entered service in Saudi Arabia from around 2016/17. Terradyne currently offer a Ford 6.7 litre PowerStroke V8 turbo-charged diesel with six-speed automatic transmission in the Gurkha, but I was unable to positively confirm that this it is this combination which is used in the Saudi vehicles.