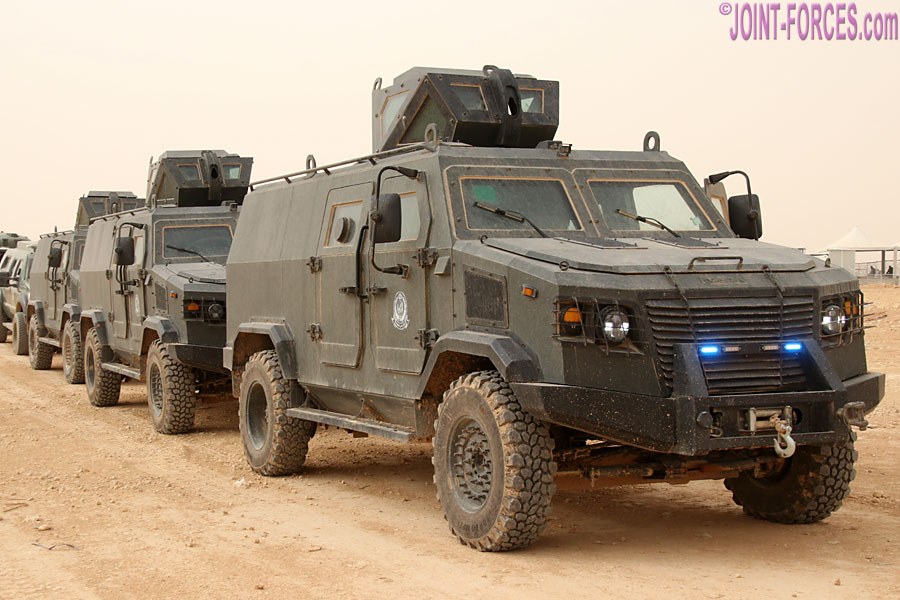 At the recent World Defence Show 2022 in Saudi Arabia we had the chance to photograph the КОЗАК-5 (also referred to as the KOZAK-5 or COSSACK-5) in use with the elite Saudi Special Security Forces (SSF) at the dress rehearsal for a dynamic display of interoperability; it has been reported that a total of 60 of these vehicles were delivered by August 2021.

According to the manufacturer, the KOZAK-5 is intended for both low intensity tactical tasks and Police or Special Operations Forces use. The smallest of the PRACTIKA family of armoured vehicles, its compact overall dimensions are said to make it perfect for action in densely built-up urban areas. PRACTIKA also say the vehicle was designed bearing in mind that occupants can expect to spend a long time inside it during missions, so the crew compartment has been made spacious with a comfortable internal height and it has both noise and thermal protection; there is also an air-conditioning pack on the rear roof. Driver and crew seats are of anthropometric shape to ensure occupants feel less tired after long trips.

Based on the Ford F-550 chassis, the KOZAK-5 measures 6100x2340x2390mm (to top of roof) and has a ground clearance of 300mm. Powered by a 330hp diesel engine with automatic transmission, it has a top road speed of 150km/hand an operational range of 600km. Dependent on internal configuration it has seating for up to ten and its STANAG 4569 protection is Level 2 Ballistic and Level 1a/1b Blast. Both manned turrets and remote weapon stations can be fitted, but the SSF vehicles I photographed all had the former. It also appeared that the Saudi vehicles were configured for a crew of four with the rear compartment being used primarily for transporting cargo or personal kit etc.

Two more vehicles from PRACTIKA, the КОЗАК-2M and the КОЗАК-7, were displayed on the Ukrainian pavilion at WDS 2022, but I plan to cover these separately. Versions of the КОЗАК are, or have been, used by the Ukrainian Army, Naval Infantry, National Guard and Border Guard.