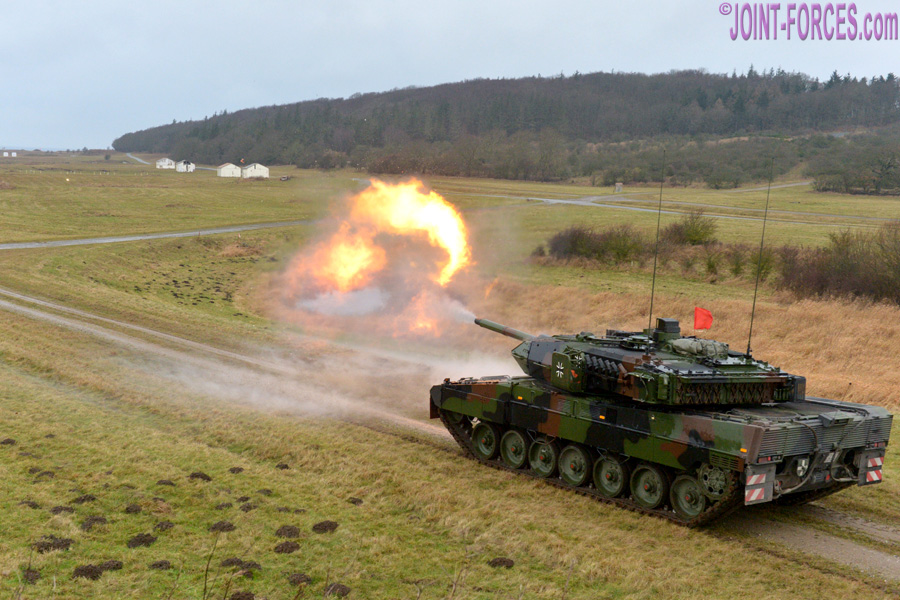 With the Leopard 2A7V the German Army is fielding a new variant of its main battle tank featuring many improvements, reports Carl Schulze.

At the front of the hull the armour protection of the Leopard 2A7V has been massively increased in order to allow the vehicle to survive hits by kinetic energy penetrators in duel situations. This has been done by installing passive add-on armour over the nose of the hull, by replacing the internal protection modules of the bow with modern ones in D Technology and by installing add-on armour on top of the vehicle’s glacis plate. Catchers and universal brackets for installing heavy side skirts are fitted along the sides of the hull in the front area and along the turret sides mounting points for an add-on armour package are incorporated, while universal fittings at the rear of the hull allow the installation of Enhanced Protection Bar Armour.

In order to increase mobility the vehicle is fitted with new P25.000 HD final drives. These allow for a faster acceleration when the tank is setting off, for example when breaking cover, but reduce the top speed from 68km/h to 61km/h.

By the sum of the modifications the gross vehicle weight of the Leopard 2A7V is increased from 64.5 tons to 66.5 tons. This has made it necessary to modify the running gear and suspension in order to maintain its outstanding driving characteristics and reduce wear and tear. These modifications include new drive sprockets, the new 570 Z double pin track, new stronger torsion bars and the installation of hydraulic dampers on all seven wheel stations on each side, in contrast to only five per side previously.

In order to improve the night fighting capabilities of the tank and to benefit command and control exercised by the vehicle commander, the Leopard 2A7V features the Spectral Technology for Unlimited Sight II (SPECTUS II) multispectral driver’s vision system. Developed jointly by KMW and the Hensoldt Optronics GmbH this system features Low Light Level (LLL) TV sCMOS cameras and uncooled thermal imaging systems at the front and rear; the footage captured by them is displayed on monitors in the driver’s compartment. This system allows the driver to reverse the vehicle without guidance by another crew-member and operate it under conditions of limited visibility.

The Leopard 2A7V uses the L55A1 smoothbore tank gun as main armament, which features a new breach-end floor plate, recoil brake and recuperator. This gun can handle much higher gas pressure and allows targets to be engaged out to a distance of 5000m. Currently the German Army fields four ammunition types for the gun: the DM11 High Explosive – Fragmentation – Tracer or HE FRAG-T; the DM63A1 Armour Piercing Fin-Stabilised Discarding Sabot or APFSDS; the DM98 Practice-Trainer UEB-T; and the DM88 Cone Stabilised, Discarding Sabot-Tracer Practice Cartridge or CSDS-T PRAC CTG.

In the field of optical and fire control equipment the EMES 15A2 main sight of the gunner has been fitted with the ATTICA 3rd generation thermal imaging system and a new eye safe laser rangefinder. The gunner has also been issued with a new display to the left of his gun controls that allows him to monitor the footage generated by the EMES 15A2 and the PERI R17A3 commanders panoramic sight from a more ergonomic position and so reduces fatigue during longer observation times.

In order to replace obsolete technology the monitor of the vehicle commander has been replaced with a new 8.4 inch display and the electrical control of the weapon tracking system has been replaced by a digital one. The vehicle navigation system has been upgraded by installing a new and highly accurate Explosion Resistant GPS Receiver (ERGR) that also offers a certain degree of resistance against deception and jamming measures.

The storage concept for ammunition, vehicle related equipment and the personal equipment of the crew has been also reworked. As part of this the snow grousers for the tracks, previously stored on the front of the hull, are now stored in brackets at the rear of the turret. Storage baskets have been attached to the sides of the turret and inside the ammunition storage room the brackets for the rounds had to modified to accommodate the higher weight of the 29.2 DM11 HE FRAG-T rounds.

The 76mm smoke grenade discharger system of the Leopard 2A7V features only six launch tubes on each turret side, instead of eight tubes on earlier models, and the tail lights have been integrated in the outlet grille of the cooling system at the rear of the hull. At the rear of the hull a new towing hitch with 70 ton capacity has been installed. Together with the 104 Leopard 2A7V the Bundeswehr is also procuring 40 sets of Barracuda Multispectral Camouflage, manufactured by Saab.

Conclusion: With the Leopard 2A7V the Panzertruppe of the German Army is receiving a modern weapon system of highest standards that is capable to dominate the battle field and prevail in the MBT against MBT duel. The fact that the Leopard 2 is more than 40 years old and still offers growth potential proves that its designing engineers did a great job.