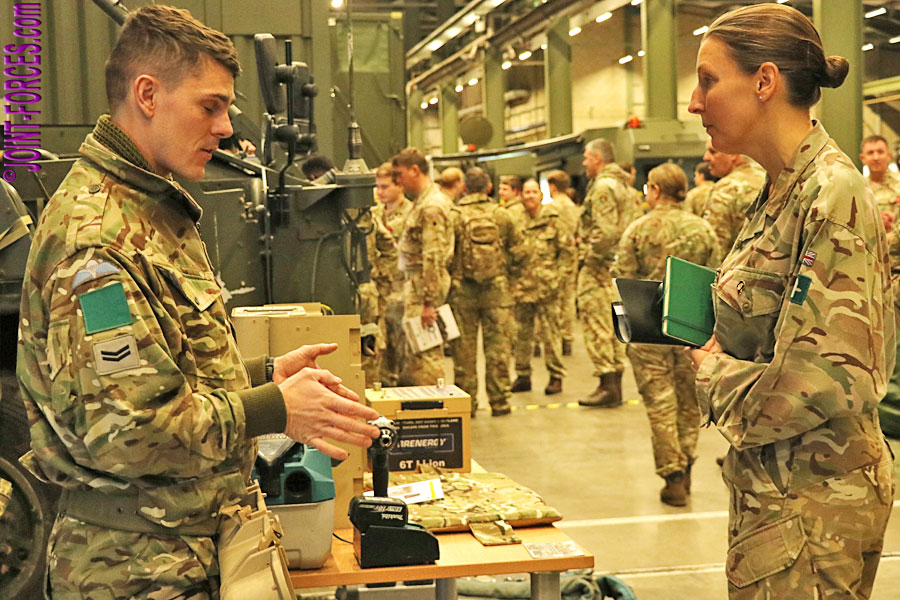 Delivered by 102 Logistic Brigade, as directed in the 1st [UK] Division Command Plan, the expo aimed to bring together new concepts, ideas and the latest technology to showcase how innovative and agile expeditionary solutions can support Light Forces to deploy further and faster with a smaller footprint. Through collaboration across the Field Army (and Defence) and supported by the Defence Industry, the expo sought to cohere Light Force innovation and identify opportunities for experimentation in 2022.

Formerly 1st [UK] Armoured Division, reorganised and renamed under the ARMY 2020 restructuring plan announced in 2012, the 1st [UK] Division is one of three current Land Forces divisions (1st, 3rd and 6th) and formed the core of what was designated the Adaptable Force. According to British Army published sources, it is currently tasked to be:-

The intent of the Expo sought to cohere innovation across six specific themes: Energy Generation, Storage and Consumption; Deployable Infrastructure; Communicating at Range; Operating in White Fleet Vehicles; Sustaining the Force; and Delivery of Equipment Support. Exhibitors from industry and military units (from both the Field Army and 3 Commando Brigade) showcased new technology and innovative ideas to support a deployed Light Force.

The wide range of stands around the periphery of the symposium auditorium were manned by both military units and defence industry suppliers, which made for a very interesting day indeed. As was probably only to be expected of an event where Army units, rather than civilians or civil servants, were doing all the organisation the day ran on time and like clockwork. It was a pleasure to attend and well worth the long drag from Devon to North Yorkshire at short notice.

On our part, the 1XX ELF Expo was mostly a highly informative fact-finding exercise which allowed us to listen to how the Division is attempting to adapt to a fast-changing environment and put itself ahead of the curve for future Operations as well as to see some innovative kit which may well enter service in the not too distant future. Unlike at the several defence expos we have attended since the start of September, much of the kit on show was COTS (Commercial Off The Shelf) and ready for fast procurement if needed, rather than futuristic and sometimes very expensive systems which can often take years to trickle down to the guys with boots on the ground, so on this score alone the event was well worth the visit.