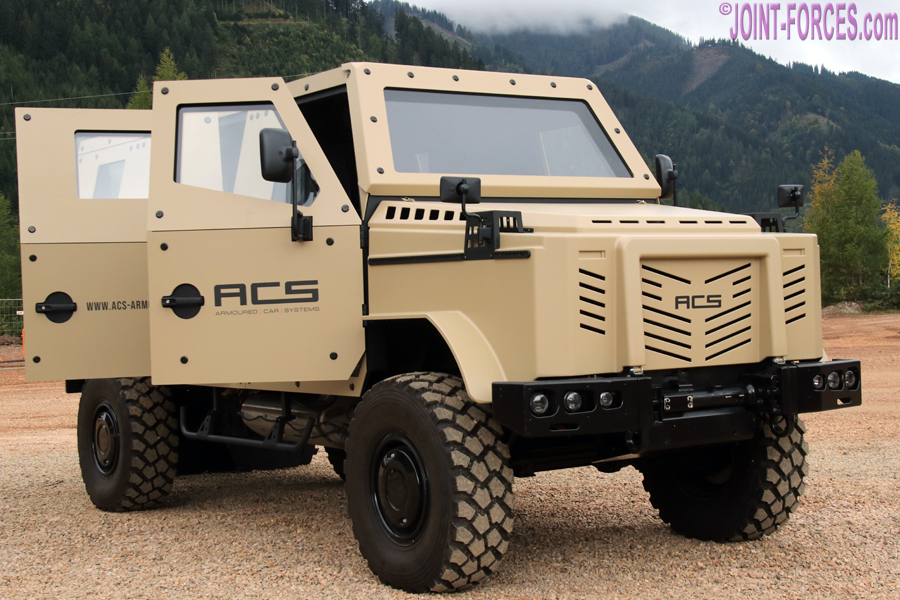 The ACS ENOK 9.5 APV is based on an uprated Mercedes-Benz Unimog U1500 chassis as used by the ATF Dingo [© Bob Morrison]

The new Unimog-based ENOK 9.5 APV, from ACS of Bavaria, was showcased at the recent Mercedes-Benz Defence Vehicles Experience in Austria, reports Bob Morrison.

Part of Germany’s GRUMA Group, which specialises primarily in the materials handling and agricultural sectors, Bavarian-based Armoured Car Systems GmbH or ACS was established 18 years ago to produce specialist military Geländewagen or G-Class conversions for the Canadian Armed Forces. From 2004 the company has produced over 1500 armour-protected vehicles on G-wagen chassis, including the ENOK 5.4 and ENOK 6.2 models in service with Austria, Germany, Finland and Montenegro, which are often used by Special Forces / Special Operations Forces and Military Police.

The new ACS ENOK 9.5 model, which uses the uprated 3850mm wheelbase Mercedes-Benz Unimog U 1500 chassis developed for the ATF Dingo 2, is a 9500kg GVW Armoured Patrol Vehicle which offers STANAG 4569 Level 2 protection for eight to ten troops or police officers. Of conventional five-door layout, the vehicle measures 5835 x 2325 x 2700mm high (to top of crew compartment roof) and has a 1500kg payload. Ground clearance is 450mm and turning circle is given as being 16.3 metres. A slightly larger version, the ENOK 14.5, offering STANAG Level 3 protection and with a 14500kg GVW has been developed by ACS.