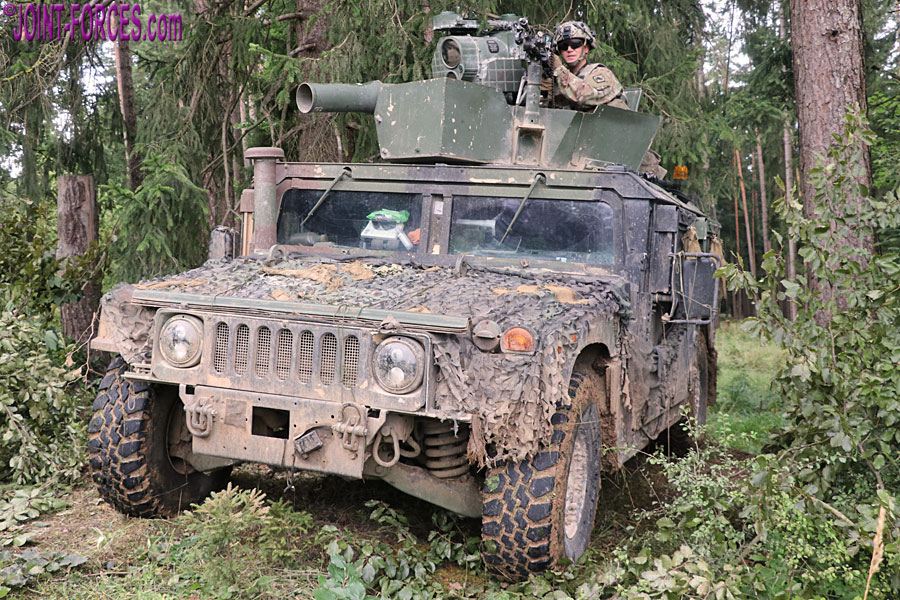 SABER JUNCTION 20 was conducted by the US 7th Army Training Command to assess the readiness of the US Army’s 173rd Airborne Brigade, reports Bob Morrison.

In the first part of this story I looked primarily at the US Army’s Germany-based 7th Army Training Command (7th ATC) and the Joint Multinational Readiness Center or JMRC at Hohenfels to help establish the bigger picture and now I turn my attention to the formation which was being assessed on SABER JUNCTION 20 at the time of my assignment in late August.

This is, of course, just a brief snapshot of the activities of the 173rd Airborne Brigade as I was only able to visit Hohenfels Training Area over the course of a single weekend at the end of the 25-day SABER JUNCTION exercise window, and some aspects were off-limits on both operational and COVID-19 deterrence grounds. However during my two days out on the training area I was given a slightly different perspective on the 173rd Airborne Brigade Combat Team, elements of which I have previously worked with on exercises in Poland and Germany, and although in this second part I have focussed primarily on the ‘Sky Soldiers’ as most would expect to see them I also had the chance to photograph the brigade’s combat engineers in the field; I plan to cover 54th BEB in Part 3.

Mission: The 173rd Airborne Brigade (Sky Soldiers) is the US Army’s Contingency Response Force in Europe, providing rapid forces to the United States European, Africa and Central Command areas of responsibilities. Forward-based in Italy and Germany, the Brigade routinely trains alongside NATO allies and partners to build interoperability and strengthen the Alliance.

The conventional US Army airborne strategic response force committed to Europe, the 3,300-strong 173rd ABCT is co-located in Vicenza in Northern Italy and Grafenwöhr in Southern Germany. Prior to the unexpected 2014 annexation of Crimea by the Russian Federation and the follow-on expansion into Eastern Ukraine, the US Army had been reducing its conventional armoured and mechanised formation presence on the European continent. When German-based HQ V Corps was Inactivated in mid-2013, the Sky Soldiers were subordinated to US Army Europe (USAREUR) to provide a highly mobile deterrent force which could be rapidly deployed anywhere in Europe or North Africa if required. Incidentally, V Corps HQ (Forward) was Reactivated earlier this year and on 9th September 2020 it was announced it would be based in Poznan in Poland.

The Combat Team’s light 4×4 vehicles inserted by Chinook included both High Mobility Multi-purpose Wheeled Vehicles (HMMWV or Humvees) and Army Ground Mobility Vehicles (A-GMV). Most readers will no doubt be familiar with the Humvee, but the A-GMV is a newcomer to US Army Europe so we will take a closer look at this interesting light squad vehicle, which is capable of transporting up to nine Airborne troops, in a future article.

Facing the US Paratroopers on the ground were both conventional military and paramilitary formations, including the Men In Black OpFor assisted by troops from other NATO nations and unconventional players, while in the several villages and hamlets spread across the 160 square kilometre training area civilian role-players brought a degree of realism and confusion. We had hoped we might have the chance to photograph Latvian and Lithuanian troops wearing their new camouflage patterns on this exercise, but unfortunately at the time of our visit the Latvian contingent was operating as OpFor and wearing a mix of their old M16 camo and black combats, and the Lithuanian contingent was deployed on a part of the training area we did not get the chance to visit. We did, however, have the opportunity to take some static library shots of the Latvian CVR(T) fleet as well as both Romanian and Ukrainian BTR armoured personnel carriers.

In addition to US Forces, contingents from Albania, Georgia, Latvia, Lithuania, Moldova, North Macedonia, Romania and Ukraine also participated in the 4,000-strong manoeuvres. As well as at times acting as OpFor, these non-US troops also worked in partnership with the 173rd, sometimes playing the part of friendly nation troops whose country was under attack from a hostile state. The precise scenario for this exercise was crafted specifically for potential threats that the 173rd ABCT might conceivably have to face in some future Crisis Response Operation and is Classified, so understandably we are not at liberty to divulge details.

As luck would have it, the tail end of an Atlantic storm battered Hohenfels on the first day of our visit and this delayed some of the action we had hoped to cover meaning the really interesting activities took place after darkness or on the day I had to travel back to the UK; unfortunately the major reduction in flight schedules meant I could not extend my trip.