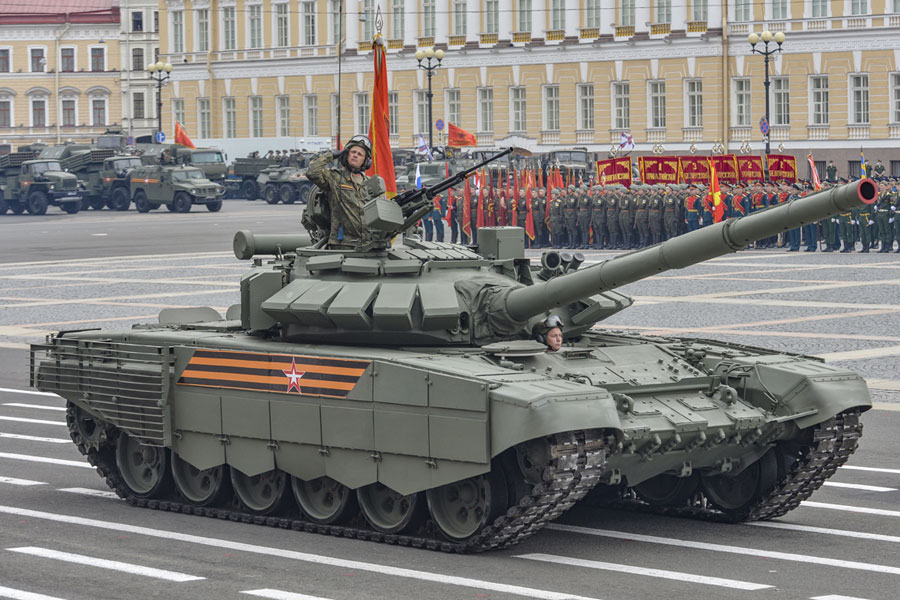 As previously mentioned when covering some of the smaller wheeled vehicles at the commemorative parades, in the run-up several rehearsals were conducted to ensure everything ran like clockwork on 24th June. We were unable to to attend the big day, as pandemic travel restrictions were still in place, but fortunately last weekend the Russian Federation MoD kindly made images from the rehearsals available.

The T-72B3M is the latest version of the 50-year old Russian main battle tank design, majorly upgraded with new 1130hp engine, new transmission, 2A46M-5 125mm main gun, new gunner’s sight, improved autoloader and latest generation Explosive Reactive Armour. It is believed by the IISS (International Institute for Strategic Studies) that the Russian Ground Forces now have at least 500 of these third generation main battle tanks, introduced from 2016, in service in addition to 1,500 earlier T-72B series tanks and around 800 T-80 and T-90 model tanks plus over 10,000 reserve tanks of all marks. In addition to conventional 125mm ammunition, the T-72B3M can fire the 9M119M Refleks (AT-11) laser-guided anti-tank missiles.

The BMP-2M is a modernised version of the ubiquitous Soviet 1980s-era Infantry Fighting Vehicle fitted with a Berezhok 30mm automatic cannon turret which mounts double 9M133M Kornet-M double ATGW (Anti-Tank Guided Weapon) launcher tubes either side. Capable of carrying up to seven infantry dismounts in addition to a crew of three, the 14+ tonne IFV has a new 400hp engine, additional armour and upgraded suspension. Following a 2017 order for 540 upgrades, it is believed several hundred of the 3,000-strong BMP-2 fleet have now been modified to this standard.

The BMD-4M is a modernised version of the 1980s-era BMD-3 Airborne Combat Vehicle, first reworked as the BMD-4 early in the current millennium, and is used exclusively by Russia’s elite VDV Airborne Forces. Weighing in the region of just 11 tonnes, this tracked armoured personnel carrier has a crew of three and can transport a half squad of five Paras in the rear, but unlike the BMP-2M it has no rifle ports in the sides so cannot be classed as an Infantry Fighting Vehicle. However it has both a 100mm rifled main gun and a 30mm automatic cannon to lay down suppressive fire as well as a 7.62mm coaxial machine gun. This modernised variant is said to have improved modular alloy armour to increase protection level. The vehicle is amphibious, able to swim across still water at 10km/hr.

The 2S19 Msta-S is a 152mm self-propelled howitzer, similar to the British AS-90 or German PzH 2000, which has been in Russian service since around 1990. Based on the T-80 tank hull, the 42 tonne vehicle has an autoloader which reduces the combat crew to just five (AS-90 requires ten for a full crew,). Range of the weapon, dependent on ammunition type, is between 25km and 36km; tactical nuclear warheads can also be fired. A 12.7mm machine gun in front of the commander’s hatch can be used for both close defence and air defence.

The 2S35 Koalitsiya-SV 152mm self-propelled howitzer is the replacement for the 2S19 Msta-S and is due to enter full service imminently. Heavier than its predecessor, possibly weighing as much as 55 tonnes, this new howitzer has a fully automatic laying and loading system. The pre-production batch, reportedly numbering a dozen, has the new and noticeably larger turret dropped on the earlier Msta-S chassis derived from the T-80 MBT, but the main production batch is expected to be fitted to the new T-14 Armata MBT chassis in due course.

The Buk-M3 Viking air defence missile system is a comparatively new tracked Transporter Erector Launcher with built-in radar capable of transporting six 9A317M medium to long range missiles. These missiles are said to be capable of punching an aircraft or ballistic missile out of the sky up to 35,000m (115,000 feet ) or 70km distant. Each BUK-M3 unit can operate autonomously, but normally a battery of six would be deployed to provide area protection for an armoured battle group. The transporters seen here are the newest seven-wheel GM-59 series version.

A full S-300VM Antey long range air defence missile system is believed to consist of two 9A83-1 four-missile and one 9A82 two-missile Transporter Erector Launchers, carrying 9M83 Gladiator and 9M82 Giant missiles respectively, plus two radar vehicles and a command post vehicle. Effective missile ranges are out to 75km and 100km respectively. Both launchers, with missile tubes but probably no missiles, appeared in the Moscow parade.

The TOS-1A Solntsepyok Multiple Rocket Launcher is the modern version of the feared WWII-era BM-13 Katyusha multiple rocket launcher, nicknamed the Stalin Organ, but this 24-tube 220mm launcher is even more devastating as its warheads are thermobaric. Designated Heavy Flamethower System 1A by Russia, the original range for these rockets was 6,000 metres, but on 10th March 2020 TASS reported that new rockets with fuel air explosive warheads and an extended range of 9,000m had been successfully deployed by troops on an exercise in Siberia. The launcher is mounted on a T-72 tank chassis.

Finally for now, the latest Kurganets-25 Infantry Fighting Vehicle, based on the Armata Universal Combat Platform, appeared again on Red Square. This variant, which reportedly can carry six or seven infantry dismounts in addition to a crew of three, has a Remote Weapon Station with 30mm 2A42 automatic cannon and 7.62mm coaxial machine gun plus pairs of Kornet-EM ATGW launchers either side, weighs around 25 tonnes and is amphibious.

[All images ©Ministry of Defence of the Russian Federation] 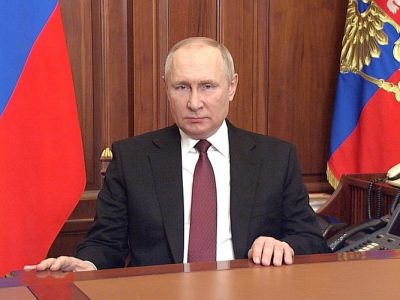 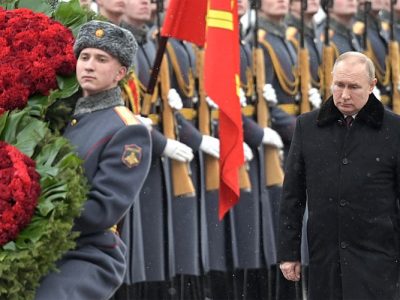