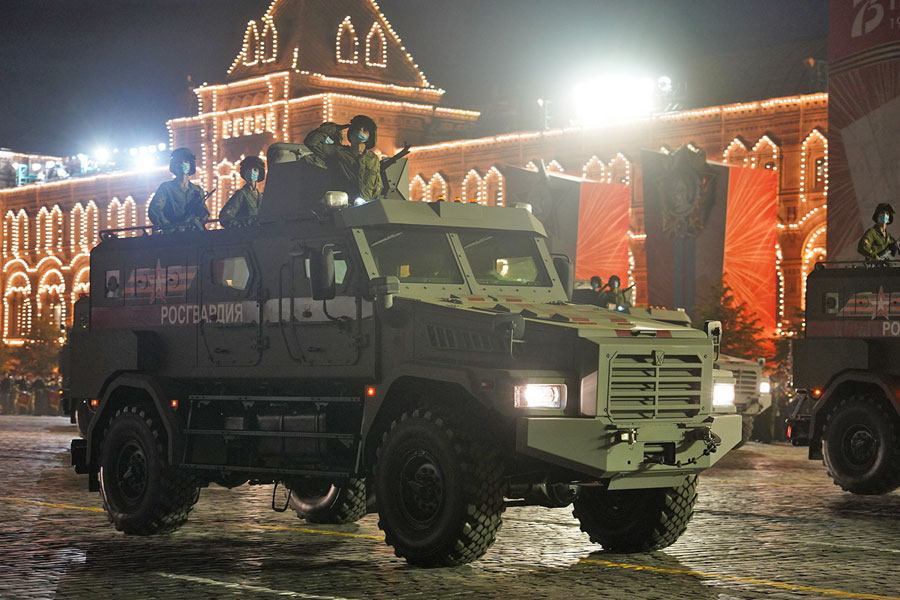 At the VICTORY 75 commemorations across Russia several interesting 4×4 vehicles, including the Typhoon-L and Tigr-M, appeared in the anniversary parades, writes Bob Morrison.

In the run-up to the commemorative parades several rehearsals, mostly starting in the evening and running through into the night, were conducted to ensure everything ran like clockwork on 24th June; the events having been postponed from the actual 75th Anniversary of the end of WWII in Europe on 9th May by the COVID-19 pandemic.

We were unable to get out to Russia to cover the momentous day, and a journalist colleague from the UK who has attended Red Square parades in the past and promised us photos this year had his plans thwarted too. Fortunately, however, the Ministry of Defence of the Russian Federation has kindly made plenty of interesting images available from the rehearsals. Looking at photos is, of course, nothing like actually being there with our cameras and able to point our lens at the most interesting of the vehicles (and uniforms) on display but it has still been interesting to pore over photos of subjects not commonly seen in the West.

Two of the wheeled armoured vehicles in particular caught my attention. The KamAZ-53949 Typhoon-L MRAP (Mine Resistant Armour Protected) is the 4×4 version of the Typhoon family of Armoured Personnel Carriers, and the GAZ-233114 Tigr-M is a 4×4 LAV (Light Armoured Vehicle). The closest current British Army equivalents to the Typhoon-L would be the RIDGBACK PPV (Protected Patrol Vehicle) but at present there is no direct equivalent of the Tigr-M on the British inventory. Prior to the introduction of this Russian LAV a version of the Iveco LINCE, known in Russian service as the Rys, was introduced for the command & liaison role and a small number of these ‘Hum-vee equivalents’ also appeared in several of last week’s larger parades around the Federation.

According to a Russian MoD news release in 2015, when the vehicle was first displayed: The Typhoon-L armoured car has a combined protection of ceramic armour, under which is armoured steel. The KamAZ-53949, with a 4×4 wheel arrangement and a gross weight of more than 15 tonnes, is capable of speeds of 105 km/hr. The Typhoon-L can be used to guard and escort convoys and for medical transportation, engineering, radiation, chemical and biological reconnaissance. In addition, it can be used as a reconnaissance and command post vehicle and as a fire support vehicle.

Both crew-served 12.7mm machine gun and Arbalet RWS (Remote Weapon Station) versions of the Typhoon-L are fielded plus a fire support version of the 4×4 Typhoon mounting a heavy RWS has been developed specifically for Russian Airborne Forces and this was also paraded last week. Known as Typhoon-VDV, this variant has a BM-30-D 30mm automatic cannon as its primary armament and coaxial 7.62mm PKTM machine gun mounted on the left side. The hull of this three-door version is shorter and fractionally lower than the standard Typhoon-L.

The Russian MoD says the GAZ-233114 Tiger Multi-purpose Special Vehicle, or Tigr-M, was designed for the transport of personnel and goods over difficult terrain. Dimensions for the basic vehicle are given as 5,700 x 2,400 x 2,500mm high with a mass of 7,200kg. The standard Tigr-M with crew of two plus eight passengers, or 1,200kg of cargo, is powered by either a 180hp or 215hp six-cylinder inter-cooled turbo-diesel engine giving a maximum road speed of 140 km/hr and cruising range of 1,000km ; unprepared fording depth is 1,200mm.

It is believed that protection levels for the Tigr-M are scalable to suit threat level, in some ways similar to the Iveco LMV, with composite armour inserts between outer and inner bodywork skins. A July 2019 Russian MoD news release concerning receipt of upgraded Tigr-M vehicles by Spetsnaz (Special Forces) in the Volga region of the Central Military District stated: The armoured car provides high security for the crew, cargo and vehicle components from small arms and land mines in combat conditions. The curb weight of the vehicle is not more than 7.8 tonnes, the crew is two, the capacity of the airborne squad is up to four people, the range is 1000 km, and the maximum speed is 120 km/hr. The machine has bulletproof tires with explosion-proof inserts that deflect the blast wave, integrated ceramic armour, mine protection, special glazing and five cameras for all-round viewing.

Russia originally bought a batch of 67 assembled Lince / Lynx LMVs from Iveco and then commenced production under a joint venture using CKD (Complete Knock Down) kits at the Voronezh automobile plant. Known as the Rys, sometimes shown as Rys’ in English, which is Russian for Lynx, these vehicles are visually near identical to the British Panther CLV. Russian manufacture was brought to a halt following the 2014 invasion of the Crimean Peninsula but several hundred examples are believed to be in service with both Army and Military Police units and the type has served operationally in Syria.

In a follow-on feature I plan to look at some of the tracked armour seen during the VICTORY 75 parades.

[All images ©Ministry of Defence of the Russian Federation]