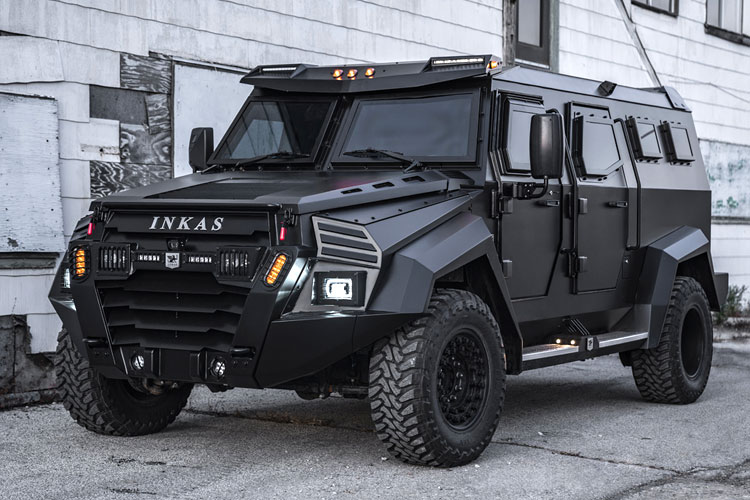 At the MiliPol Police & Security expo in Paris the team from Canadian vehicle armourers INKAS told me about their new Sentry Civilian and I was hooked, writes Bob Morrison.

After reading the spec sheet for the INKAS Sentry Civilian and perusing the batch of images that the sales team electronically transferred to me I decided I should like to cash in some of my investment and buy this unique armoured SUV as a late Christmas present for myself.

The Sentry Civilian, according to the manufacturer’s sales literature, “offers the ‘SWAT’ vehicle experience, however in a civilian-grade package designed to be a daily driver”. On the face of things this might look like an ultra-security-conscious US rap star’s blingmobile for the streets of New York or Hollywood, until one bears in mind that in some parts of the world where INKAS armoured vehicles are almost commonplace there are leaders and rich people who might actually need to transport their families in well-protected off-roaders that offer the same degree of internal comfort and style they are accustomed to in the rest of their life. Offering the same protection level as the standard INKAS Sentry, the middle-sized vehicle of the three in the INKAS Armored Vehicle Manufacturing mainstream APC (Armoured Personnel Carrier) range sitting between the Hudson and the Huron, this civilian vehicle is no toy.

Looking first at the protection, the Sentry Civilian can be armoured up to CEN1063 BR6 level giving protection against 7.62mm assault rifle bullets and twin DM51 hand grenade explosions. Based on an upgraded Ford F-550 platform with optimised the suspension system, heavy-duty brakes and reinforced key mechanical components, the vehicle has a monocoque body with perimeter armouring of both the personnel compartment and engine bay, as well as key mechanical components, to protect against both ballistic and blast attack. The design incorporates multi-layer laminated ballistic glass and a proprietary INKAS overlap system to prevent bullets and shrapnel penetrating between door seams. Talking of doors, in addition to two side doors apiece for driving and passenger compartments there is also a rear emergency exit from the latter.

For those uncertain of whether or not the Sentry Civilian will fit their garage, its basic dimensions are 5969mm long by 2514mm wide by 2489mm high and the wheelbase is 3576mm. The vehicle is powered by a 6.7-litre, 330hp Ford V8 diesel engine and it has a 10-speed automatic transmission plus naturally, as it is based on the internationally available Ford F-550 truck, it is four wheel drive. To bling it up a little for the civilian market, the exterior design of the Sentry Civilian model has been upgraded with front and rear spoilers, a modified rear bumper, and illuminated steps to “add a sporty touch to the already upscale vehicle”. As INKAS have produced a wide range of armoured luxury limousines over the last two decades, in addition to their core police and military models, the interior can be customised to the client’s precise requirements but the six-seat version shown here is the base model offered for 2020.

Unfortunately my investments did not pay up the other day – only the Bonus Ball popped out for me during the Christmas Day National Lottery draw – so I have not yet been able to place my order with INKAS for my own Sentry Civilian to take with me on future assignments. Maybe my Christmas 2020 £2 investment will bear fruit, and if it does my rear layout will consist of just two fully reclining rear seats with storage areas for cameras and computers behind and hanging wardrobes at the very rear for spare clothing, body armour and helmets for myself and my pretty assistant. One can but dream.