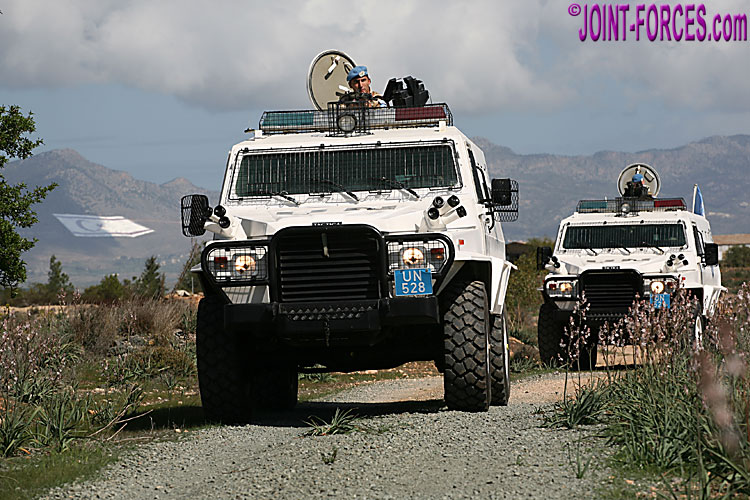 A brace of Tactica APVs, T4 and T5, on patrol in the Buffer Zone on UNFICYP's 50th birthday in 2014 - Argentinian owned but British made, they were driven by Argentinian soldiers but commanded by British NCOs [©BM]

The Tactica started life in the 1980s as a prototype armoured vehicle built on the Gomba Stonefield (previously Stonefield Vehicles) P5000 4×4 truck chassis but subsequently batch production commenced on a new chassis produced by Glover Webb of Hampshire.

Glover Webb (formerly Glover, Webb & Liversidge) were originally coachbuilders or vehicle converters, but by the mid-1980s the company had branched out into armoured vehicle production and was manufacturing the Land Rover One-Ten APV (Armoured Patrol Vehicle) used by the British Army in Northern Ireland. They then manufactured a Forward Control (i.e. Cab Over Engine) version of the Tactica armoured personnel carrier as a specialist EOD team vehicle for the British Army which was used almost exclusively in Ulster on Operation BANNER. In 1994 Glover Webb was bought by GKN and in 1998 the armoured vehicle production side was bought by Alvis, later to be swallowed up by what is now BAE Systems.

Unlike the more boxy and less aggressive looking vehicle fielded by the British Army in Ulster, the Tactica variant used by UNFICYP is a more conventional shape of bonneted infantry vehicle with a V-shaped hull for mine protection and sloping sides and rear to help deflect bullets. Although British-built, the nine Tacticas used by the APC Platoon of the UNFICYP MFR are actually Argentinian owned and maintained. Their drivers are always Argentinian, even though the vehicle commander is nearly always British, and the troops in the rear are a mix of Argentinian, British and Slovakian (plus other South American troops seconded to the Argentinian Contingent). The standard vehicle complement is commander, who is usually the section commander, and driver plus up to nine riflemen seated in the rear on two inward-facing bench seats. The drivers belong to the 15-strong and all-Argentinian APC Platoon, commanded by a lieutenant with a REME-equivalent warrant officer as 2IC, and their unit is also responsible for routine maintenance of the vehicles.

When the UNFICYP Tacticas were introduced in 1998 each had simple square roof hatch for the top cover soldier, but by 2014 they had been modified with circular rotating hatches alongside which a British 7.62mm GPMG (general purpose machine gun) could be fitted to provide covering fire. Four-barrelled smoke dischargers had also been added to the front wings, but other than this these nine vehicles were essentially to the same configuration as when they entered service. At this point I must say that, despite having been in daily use for over fifteen years when I last photographed them, the Tacticas had been superbly maintained by the Argentinian MT warrant officer and his team and they were immaculately presented. Indeed comparing against the photos I took of them in 1999, when they were just a few months old, it is hard to believe that these were the same vehicles.

The Tactica version pictured here is what the manufacturer called their Armoured Patrol Vehicle, to differentiate it from their slab-sided and more bus-like Armoured Personnel Carrier model. Most sources state that Argentina bought ten Tactica APVs but only nine are deployed on UN duties; they are, and always have been, numbered T1 to T9. It is possible that a tenth was bought as a spare and as a driver training vehicle, but I have been unable to confirm this so I think it probably unlikely.

In APV configuration, the Tactica has conventional front doors for driver and commander and two-piece rear doors through which the rifle section mount and dismount. There are three sliding firing ports in each side and one in each back door, with armoured vision blocks above. Windscreen and front door windows have armoured laminated glazing and are protected by mesh screens, as are the wing mirrors and the red & blue police-style light bar on the roof and the rotating roof-mounted spotlight. There is a brushguard in front of the radiator, with mesh panels in front of the headlights, and the rectangular rear light clusters are protected by mesh cages. The Tacticas are the only Internal Security vehicles available to the UN on Cyprus for riot control, hence them appearing more like police vehicles.

Above: Grilles in body behind front doors are for the air-conditioning pack – Cyprus gets very warm in summer – note also three firing ports with vision blocks above in each side.

Although based at Airfield Camp, just to the west of Nicosia, the MFR Tacticas occasionally patrolled the entire length of the Buffer Zone and from time to time a couple of sections, or even a platoon, redeployed for several days to patrol bases in the Sector 1 (west) or Sector 4 (east) with their Tacticas.

In 2002 Alvis took a brace of Tacticas out to Malaysia for the DSA military expo and issued the following Press Release, a copy of which I still have on file, along with a couple of comparatively low resolution promotional images of the two types of vehicle being displayed.

Press Release, 5 April 2002: The Alvis Tactica family is a complete range of versatile, cost-effective 4×4 wheeled vehicles, especially designed for military and police forces in many roles. Tactica’s non-aggressive profile makes it suitable for use in police and internal security tasks where other vehicles might be unacceptable; while its armour protection, reliability and impressive on and off road mobility make it equally suited to military roles.

Tactica has been proven in service with police forces around the world and by South East Asian police forces for over 10 years, on both routine and special deployment duties. Tactica’s inconspicuous appearance and levels of crew comfort make it ideal for discreet, long-duration missions; in particular:

Tactica vehicles have recently been on deployment undertaking UN peace-keeping duties in West Africa. These Tactica vehicles, in command, ambulance and patrol variants, were selected for this work because of their well-established track record with military, police and security forces around the world. The Tactica family is ideally suited for many roles, including: