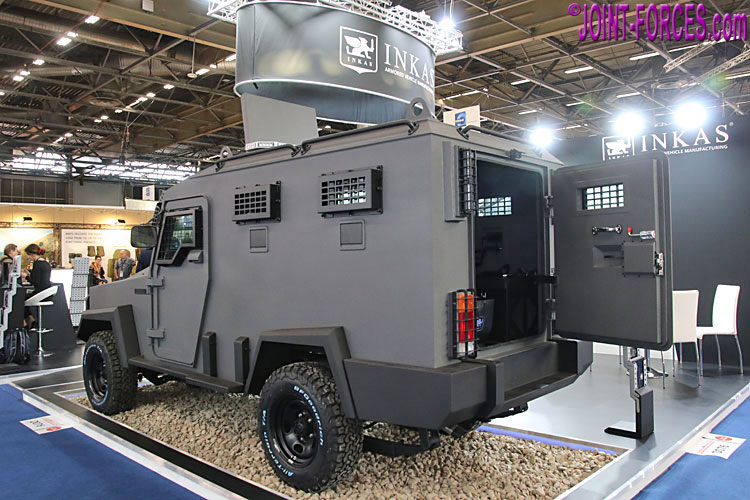 The INKAS Hudson is a Canadian-produced Armoured Personnel Carrier built on the Toyota Land Cruiser chassis which recently appeared at Milipol in Paris, reports Bob Morrison.

Civil disturbance in France, as anyone watching television news channels at present will be aware, is not exactly a genteel affair and the security forces are increasingly facing heightened threat levels requiring vehicles offering more protection than minibuses with shields over their windows. Add the current nationwide terrorist threat level to the mix and it would appear there is a requirement for a bigger fleet of larger armoured vehicle for police use than the little DAGGER but a smaller solution than the TITUS and a lighter alternative than the SHERPA LIGHT or SERVAL.

The INKAS Hudson is one of several possibly suitable vehicles which were presented at the Milipol security expo in Paris and in times of tight budgets this comparatively lightweight APC which can still offer CEN 1063 BR6 protection levels could well be an attractive proposition to the French treasury. Currently in service in a number of countries for law enforcement and border patrol duties, the INKAS Hudson is based on the well-proven Land Cruiser 79-Series chassis and is powered by a 4.5-litre V8 Toyota diesel engine developing 202hp. Up to eight personnel, including driver and commander, can be transported in the lightweight composite armoured hull which offers protection against 7.62mm assault rifle bullets and hand grenades. Dimensions are 5200 x 1930 x 2160mm high and wheelbase is 3180mm.

Although possibly not too well known as a brand on this side of the Atlantic the manufacturer, Toronto-based INKAS Armored Vehicle Manufacturing, is part of the multi-discipline INKAS Group which also has Cash In Transit, Safe Manufacturing, Limousine Customisation, Metal Fabrication, Software Development and Environmental Protection divisions.