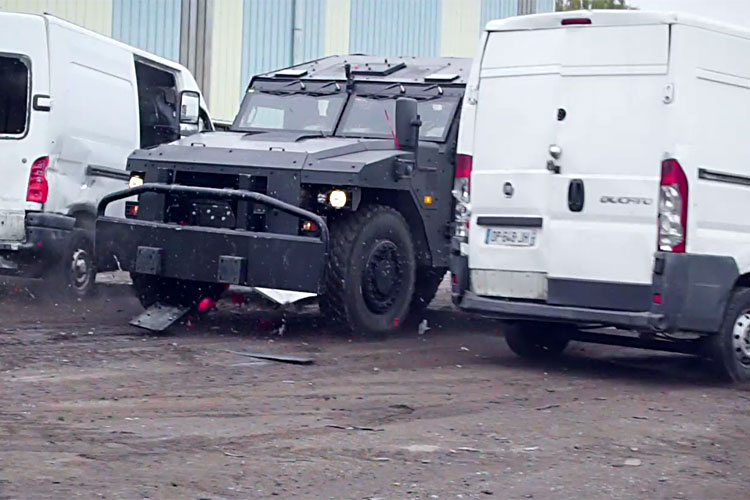 In the aftermath of recent terrorist and serious public disorder incidents it is widely accepted that France’s police and internal security forces need a new light armoured vehicle capable of not only transporting personnel to the scene under greater protection but also of clearing barricades and debris hindering access. As much of the French Army VAB fleet, which first entered service over 40 years ago, should soon be pensioned off when a new generation of wheeled armoured vehicles is fielded there have been suggestions that maybe these should be refurbished for police and gendarmerie response units but it is questionable whether cost savings can be achieved by doing this rather than buying more modern and purpose-designed replacements.

Arquus, whose Sherpa Light family of 4×4 vehicles is operational in around a dozen countries, has produced as a private venture a new Internal Security Vehicle variant which has a purpose-designed heavy duty bullbar (Lame de Déblaiement or Blade for Clearing) specifically for barricade clearance. The accompanying company video of this armoured personnel carrier shows a series of preliminary trials conducted with the vehicle prior to Milipol.

For the technically minded, the basic Police / ISV version of Sherpa Light has a GVW of 11,000kg and in 3,790mm wheelbase version measures approximately 6,000mm x 2,300mm x 2,400mm high. Up to eight officers can be transported in the rear in addition to the crew of two. An Assault Ladder (Echelle D’Assaut) variant of Sherpa Light for Police Special Operations which gives access to 8.5m level is also produced.