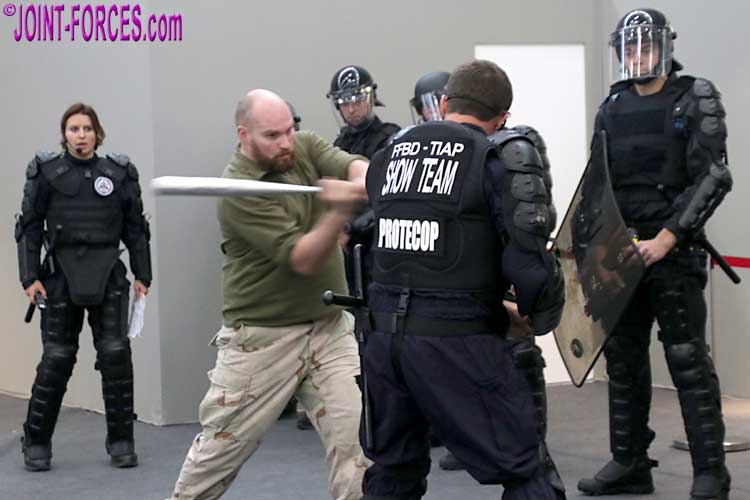 Today at Milipol 2019 was a little less frenetic as we toured around the stands to meet up with our Sponsors and also watched the dynamic displays, reports Bob Morrison.

Day One of every expo is always busy as companies vie with each other to announce new products and catch the attention of visiting buyer delegations, and yesterday (Tuesday) at Milipol was no different, but today was more relaxed and we managed to spend a little time chatting to quite a number of our friends in the trade as well as catching up with new developments. We were also able to spend a little time watching and photographing the FFBD (France Formations Bâtons Défense) Tactical Intervention show team demonstrating the efficiency and properties of PROTECOP protective equipment used by French police in civil disturbance scenarios – always an interesting spectacle at the Paris defence and security expos.

As comparatively few of our readers get the chance to see our Sponsors’ trade event stands, or for that matter our friends in the industry who spend even more time than the JOINT-FORCES team out on the road at the major expo centres, below are just a few of the guys in front of their wares. Without their hard work your favourite clothing and footwear brands would not be quite as successful. It was also great to meet Ronan from ARKTIS, whose family bought the iconic kit & camo brand originally founded by former Royal Marine officer David Ross after the Falklands Campaign on the retirement of last owner Tim Holden, and who are determined to see the famous name back on everybody’s lips; in the not too distant future I plan to visit their new and expanded headquarters just a stone’s throw from the old factory in Exeter.