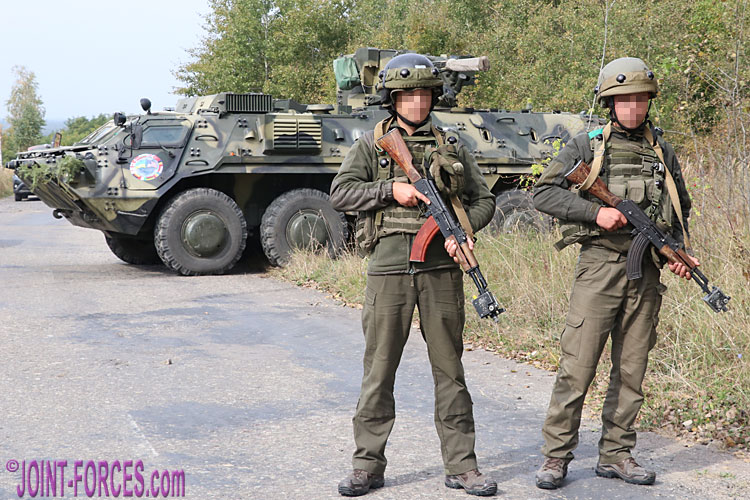 The BTR-4E is a Ukrainian 8×8 amphibious armoured personnel carrier with remote weapon station which has seen operational service in both Ukraine and Iraq, reports Bob Morrison.

Produced under the UkrOboronProm umbrella, the Ukrainian state defence conglomerate, the BTR-4 APC family was designed by the Kharkov Morozov Machine-Building Design Bureau and is produced at the Malyshev Plant which also manufactures main battle tanks, wheeled armoured vehicles and diesel engines for both military and civilian use.

The E-suffix model of the BTR-4 is used in quantity by both the Ukrainian Ground Forces and the Ukrainian National Guard; the vehicle featured here was used by the latter. While out on the Yavoriv Training Area during RAPID TRIDENT 2019 in September, I spotted several examples of the BTR-4E forming a defensive perimeter around Brigade Main during the LIVEX phase but was unable to photograph them as I was in a vehicle moving between different parts of the exercise and stopping would have meant us missing our next RV. However, on my way back to ExCon on my last day, just before the exercise action concluded, we had to pass through a National Guard outer perimeter VCP (vehicle check point) and this gave me the opportunity to have a good walk round one of these interesting homegrown APCs.

To be honest, when I first saw the BTR-4E I was unsure of precisely what I was looking at and had to research the subject before sitting down to pen this article. From reasonably close up the Ukrainian vehicle bears a passing resemblance to a SISU Pasi or a Transportpanzer Fuchs, though of course the Finnish and German vehicles are 6×6 rather than 8×8. Armoured vehicle enthusiasts will know that the initials BTR, БТР in the Cyrillic alphabet, stand for Бронетранспортер (Armoured Transporter) and various, mostly wheeled, Soviet / Warsaw Pact vehicles carried this designation from around 1950. Ukraine, as a Warsaw Pact nation, used several BTR variants and after independence first upgraded BTR-70 and BTR-80 models and then manufactured brand new 8×8 BTR-3 and BTR-4 8×8 APCs.

According to UkrOboronProm sales literature: “The BTR-4E is intended to transport personnel of mechanised infantry units and to provide fire support in combat operations. The APC is used for equipping military units capable of carrying out combat actions under various conditions, including NBC environment.” The organisation also states: “The APC can be used as a basic vehicle for equipping quick-reaction forces and marine corps. The APC can fulfil its tasks day-and night, under various climatic conditions, on hard-surface roads and off-road. The operating temperature range of the APC is -40° to +55°C.

Four different types of weapon stations can be fitted to the BTR-4E, namely:

The vehicle seen here has the BM-7 ‘Parus‘ remote operated weapon system, which appears to be quite bulky until one realises that there is no massive turret basket protruding inside the vehicle and intruding into the available crew compartment space. This means seven infantrymen plus commander, driver and weapons operator can all be fitted into the relatively low hull. For those interested in dimensions, these are given as 7878 x 2936 x 3050mm high over weapon station. Combat weight is believed to be 22.4 tonnes when additional armour plate and slat armour is bolted on.

Ukrainian BTR-4E personnel carriers are fitted with a 500hp Ukrainian 3TDA-3A engine and have five forward and one reverse gear automatic transmission – a combination which the manufacturer claims gives a top road speed of 110km/hr; a 430hp Iveco Cursar C10 engine option is also available for foreign buyers. As with earlier Soviet-era BTR wheeled vehicles, the BTR-4E is amphibious for crossing lakes and rivers, propelling itself at 10km/hr courtesy of two ducted propellers at the rear.