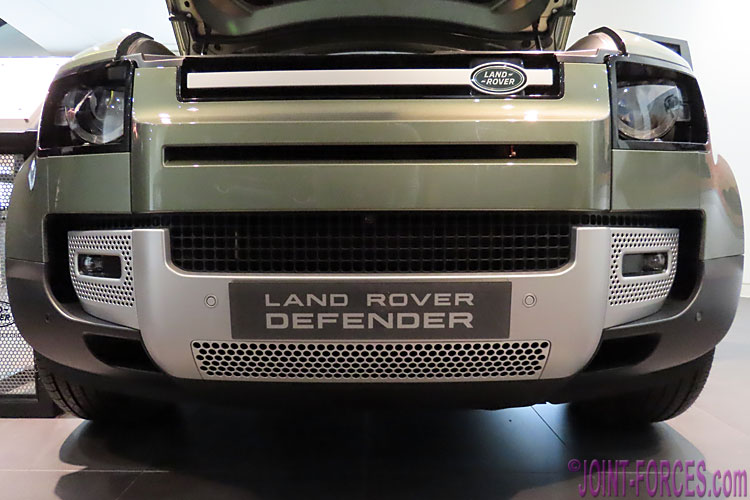 The Land Rover New Defender, as we reported on September 10th, was officially launched in a blaze of publicity at the Frankfurt Motor Show, writes Mike Gormley.

Following a long pause in production and considerable speculation, the New Land Rover Defender is progressing through a series of launch events around the World. Earlier this week I was invited to a Reveal at the historic roots of the Land Rover, Lode Lane in Solihull.

At Solihull I was able to touch New Defender, get in the seat of the launch vehicle and have a good look around it. This was a prototype unit and it was important to see it as being just that and as used at Frankfurt and for the preceding PR events and video production in Kazakhstan with the likes of climber Kenton Kool. A look underneath at the inherently well-protected nether regions confirmed this! I have to say that although well-travelled, the body and interior looked very tidy which looks very promising for the durability of the New Defender.

I learnt to drive long ago, and well before I was able to legally go on the road, on a Willys Jeep and a Series 1 Land Rover that my parents bought in about 1951. For many years the driver had to have a high level of input to get the vehicle to achieve a good outcome off and on road. The need for experience and training was a necessary requirement. Part of my life with vehicles was to demonstrate and trial specialist vehicles and also to train drivers. For me it was my life and what I did.

So often for the end user driving is just a part of what they do. Much of what I did was in the military world. The military driver has a lot to do. His job is important if not critical, especially when the going gets tough. His load could be high value in personnel and load. Lives can and do depend on his ability to operate under extreme pressure. A point often lost it seemed to me, in many cases. My reasons for going into this is that the better and more able the vehicle, the less the driver has, in some respects, to do. Clearly the ability of the driver is no less important now than it ever was, but in most cases he will have other things on his mind; be he or she a Soldier, Marine, Police Officer, Close Protection Operative or just a more adventurous user. The more capable the vehicle the easier it is for him or her to both achieve their responsibilities as a driver but also to do their other tasks.

For years the, dare I say humble, Land Rover has been the staple base transport for military use all over the World. Love ‘em of not, they have served well as a general logistics vehicle through to the much adapted Special Forces and Armoured variants. The variations and adaptations are legion. Although production ended in 2016, there are many thousands out there ‘in service’. The often asked question when Land Rover ceased production of the Defender was “what now?” and speculation abounded whether or not JLR (Jaguar Land Rover) would in fact replace it. Eventually some signs of a new one were about and the armchair critics were there in a jiffy!

These critics were also there with the old Defender, known originally as the One-Ten. Too slow, an awful ride, uncomfortable and so on. Well now at least they have something tangible to have a go at. By legal necessity the old Defender design has been parked up by JLR. This said Land Rover have gone to considerable lengths to keep the connection right back to the S1 and through to the recent Defenders. There are some obvious features to be seen in the detail and overall looks of the new Defender. So, where do we look to find the other elements of the New Defender.

I have been a Land Rover Discovery 4 (D4) owner for some years now and I soon realised what was going on. In my view, put a Defender and a D4 into a blender, add quite a few choice ingredients, many already existing in the Land Rover armoury and you get a New Defender. Straight away, for me, I heard a sigh of relief from the D4 owners and enthusiasts. Many who were not at all happy with the looks of the Discovery 5 or D5, which is far too suburban and more like an Evoke on steroids. Not the practical, very capable, albeit very comfortable, workhorse that the chunky D4 is. Where were they to go when the time came to replace the trusty D4. I think the answer to that has now emerged. Knowing the D4 as I do and looking at what is on offer in the New Defender, the result will without doubt be a very capable vehicle indeed. So bringing it back to the driver, who is not necessarily an owner or enthusiast but someone who has a very serious job to do.

This job could be in very difficult situations, perhaps following a long transit drive on roads and perhaps tracks in desert or on snow or in the mountains of ‘who knows whereland’. The driver of a New Defender will have every chance of success on the mission even with comparatively little real off-roading experience. There is an eight speed, dual range auto gear box, very adequate power and torque (four engine options) and a very useful selection of dial up ‘tricks’ to match the vehicle’s system to conditions, but even these can be set to ‘auto’ on the New Defender. There is also a new mode added for wading on the New Defender. With my experience with my D4 these now expected Land Rover settings are extremely effective. Some very clever stuff goes on in those ECUs which seem to be able to coat those four contact patches on the tyres with ‘glue’ as they go around, especially in snow and mud. The other clever one is the Hill Decent Control. I was very quickly a convert to this on my Land Rover Freelander when it dealt with ease going down a damp grass slope with a trailer behind that I had previously been run away with in another 4×4.

On the subject of electronics and serviceability. Many say that these new vehicles are far too complicated and unable to be fixed in the field. In many ways I must agree. But, having been in the vehicles business during the transition period of basic and no electronics when a bit of ingenuity and wire would often get you home, to fix it with a laptop, I have come to accept the modern way. The reliability of the current electronics is really pretty good, though in the early days it didn’t used to be. Whatever we may think we are stuck with it. Modern requirements for emissions, safety and perhaps above all, vehicle capability, has dictated where we are now.

My son Bruce is a dyed in the wool old school Defender man and won’t agree, with good cause, having had to fix my Mum’s old Land Rover County 90 in the middle of Morocco. But, higher powers than us dictate the route we must go with technology. The steel ladder chassis is gone on the New Defender and is replaced by a very significant brand new all aluminium monocoque body which we are told is amazingly stiff and resilient to the sort of use expected of it. It certainly looks to be so. It is perhaps this type of construction that will raise a lot of questions and certain criticism.

We have been shown ‘infographics’ of the commercial variants which will follow along from the current very varied range in a while. Gone is a flappy canvas pick-up. Straight away the lack of a basic pick up will preclude many of the traditional uses and variants of the Defender from military and utility type users; though it must be borne in mind that several European armies have already traded Land Rover or Geländewagen pick-ups for militarised monocoque Sports Utility Vehicles. I could see some will find ways around the lack of a pick-up body on New Defender, but it won’t be easy and has major cost implications, but if the requirement is there for a base vehicle with the New Defender’s capability I am sure the third party developers will find a solution. I am also sure those companies that produce discrete armour protection will already be busy and looking for ways to replace the many armoured D4s in use around the world.

The prices quoted for the New Defender is another hurdle for those looking for a utility vehicle. It is significantly more than many Defender users would perhaps expect or want to pay. This said, the New versus Old is a quantum leap in capability which is not cheap. Not all will need this ultimate ability. If you start to look at the detail beyond the main elements of engines, gearbox, body architecture and so on there is a mass of very innovative options and features that all add up to making this a real driver’s vehicle. Check out the mirror, lights, all round visibility, Discovery style seating, the centre front seat (another hark to the past) that duals as a console and a pile of extras to suit many user types. Some are grouped into themed ‘Accessory Packs’ on top of the familiar specification levels, S, SE , HSE.

JLR have also put in a coil sprung option to get away from the complex air sprung, variable height system fitted to most models. During the presentation I did pose the question of the traditional military and utility markets and had JLR discarded them? The answer was not a straight one. I was left to read between the lines with a glimmer of hope. So, we continue to ‘watch this space’. All in all I think this will be a formidable vehicle and a great deal rests on it for Land Rover, who have already and continue to put a huge level of effort and funding behind it. It’s just a real shame it is not following the other tradition and being built at the Lode Land factory.

A great deal more information is available on Land Rover’s website where all the details can be found, so no need for me to try to replicate it here. There is simply not enough space here anyway.