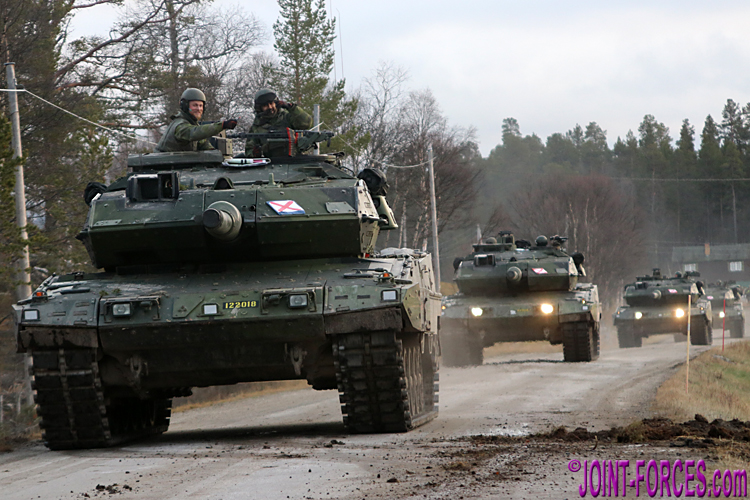 Sweden is not a NATO member and has traditionally maintained its neutrality, but concerns of late over Russian Federation expansionism in the Black Sea region and fears that the Baltic Region may be next have led to both Sweden and its neighbour Finland cooperating closer with the Alliance on military training exercises.

On Exercise TRIDENT JUNCTURE 18 (TRJE18) Sweden formed the core of the third multinational OpFor (Opposing Forces) brigade on the north-south axis, running parallel to the Norwegian-Swedish border, between the town of Røros and the village of Drevsjø; both of these Norwegian population centres being easily accessible by road from Sweden. Finland joined this Swedish-led brigade to give it a multinational aspect and a Norwegian Home Guard Company gave additional support. The South (Blue) Force multinational brigade facing the Swedes and Finns consisted primarily of a German (lead) armoured battalion, Dutch and Norwegian mechanised battalions, a French light infantry battalion, and support arms.

On 5th November, F+1, after having spent the morning catching up with the Italian-led Blue Forces formation pushing north up the Orkla valley towards Kvikne, I turned around and headed eastwards in the direction of Sweden to try to find the Swedish-led Red Forces formation drawing back from the advancing German-led Blue Forces formation as I was keen to photograph the Stridsvagn 122 in the field for the first time. I was in luck as not only did I find the Swedish tanks, along with accompanying mechanised infantry from 42nd Mechanised Battalion, both from Skaraborg Regiment P4, but I also stumbled across the Role 1 Field Hospital; but that is something for another day.

The scope of TRIDENT JUNCTURE 18 was so wide, and the exercise took place over such a wide area, that even though the defence and counter-attack phases each took place over four days apiece it was not feasible to cover all six brigades and two amphibious task groups participating – though as those who have been following the series will have seen, I gave it my best shot. With only half a day to try to find the Swedish-led brigade in the field, and with the days noticeably getting shorter in November, I was regrettably unable to locate the Finnish Army contingent on this particular exercise but I am sure there will be other opportunities in the future.

Above: Two views of a typical Swedish Stridsfordon 90[©BM

Above: A second Stridsfordon 90 – known elsewhere as the CV90 [©BM]

Above: BvS 10 ambulance, SISU Pasi ambulance and DROPS trucks – we will take a brief look at the medical side of the Swedish Battle Group in a future feature [©BM]

Above: A Swedish Archer 155mm Artillery System from A9 Artillery Regiment in position ready for a fire mission[Swedish Armed Forces: Marcus Nilsson]