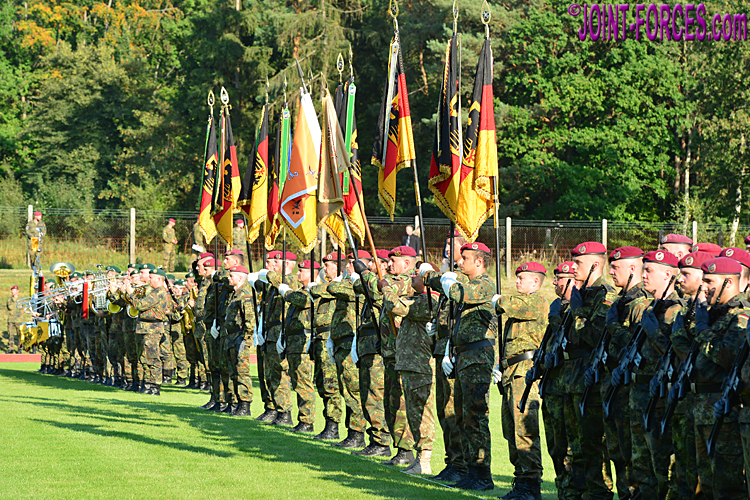 On 30th and 31st of August 2019 the Division Schnelle Kräfte (DSK) of the German Armed Forces celebrated the fifth anniversary of its formation, writes Carl Schulze.

The celebrations of Germany’s Stadtallendorf-based Rapid Forces Division involved a parade during which the DSK was honoured by being granted the streamer of the State of Heese of the Federal Republic of Germany for its colours. Also part of the celebrations was an open day in the Herrenwald Kaserne barracks.

The Division Schnelle Kräfte (DSK) was stood up under the Heer 2011 German Army structure on the 1st January 2014. It was formed out of the Division Spezielle Operationen or DSO (Airborne And Special Forces Division) and army aviation elements previously assigned to the Division Luftbewegliche Operationen or DLO (Airmobile Division). In addition, in June 2014 the 11 Luchtmobiele Brigade (Air Assault Brigade) of the Koninklijke Landmacht of the Netherlands was also placed under command of the DSK. The motto of the Division is Einsatzbereit – Jederzeit – Weltweit, which translates as Combat Ready – Anytime – Worldwide.

Missions: The DSK is specialised in the planning, preparation, commanding and execution of airmobile, air mechanised, air assault and airborne operations. It can be employed over the full spectrum of military missions, from providing humanitarian help after a natural disaster, through conducting crises prevention, stabilisation, peace support and peace enforcement operations under asymmetric threat scenarios, up to full scale warfighting within a high intensity conflict. A speciality of the Division is to conduct early entry operations. One main mission of the DSK in peacetime is to plan, prepare, command and execute non-combatant evacuation operations (NEO) as part of Germany’s national crisis management planning. As part of this, elements of the Division can be deployed worldwide within 24 to 96 hours to evacuate German citizens, as well as citizens of partner nations.

The Division also has the task of keeping a bi-national Air Manoeuvre Task Force (AMTF) available that can be employed under NATO or European Union leadership. Another task performed by the DSK is the coordination and employment of army aviation assets in order to maintain the Search and Rescue (SAR) service in Germany.

Structure: In total the DSK numbers some 9,500 troops, to which some 2,300 Dutch troops of the 11 Luchtmobiele Brigade have to be added. Basically the following formations and units fall under command of the DSK:-

The Celebrations: The highlight of the fifth anniversary celebrations was a parade held on 30th August at the Herrenwald Kaserne barracks. Led by Generalmajor Andreas Hannemann, the Division commander of the DSK, it saw the participation of delegations of all formations and units of the Division. Among other VIPs, the parade was attended by the Prime Minister of the State of Heese of the Federal Republic of Germany, Volker Bouffier, the Parliamentary State Secretary of the German Ministry of Defence, Dr. Peter Tauber, and the Chief of Staff of the German Army Generalleutnant Jörg Vollmer. As part of the parade Volker Bouffier granted the DSK the privilege to carry the streamer of the State of Heese on its colours.

The open day in the Herrenwald Kaserne barracks took place on 31st August. It saw the participation of all formations and units of the DSK, as well as several of the assets earmarked to support it during training and operations. Attractions ranged from static displays of weapons and equipment, as well as helicopters, to action-packed dynamic demonstrations performed by service dog handlers and the Fallschirmjäger mit Erweiterter Grundbefähigung (Special Operations Capable Paratroopers) of Fallschirmjäger Regiment 26. Freefall parachuting from an NH90 utility helicopters was also part of the attractions.